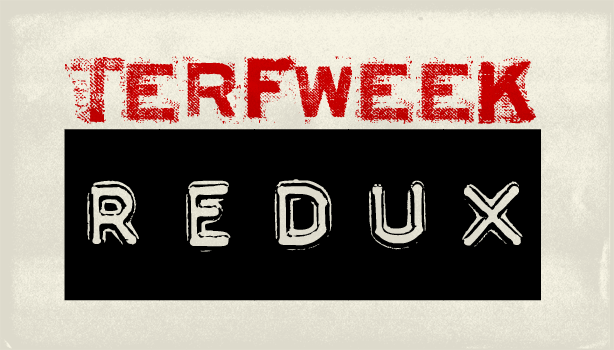 In the post announcing #TERFweek, we specified goals for the week. These goals were:

#TERFweek has accomplished this and so much more. Actual Radical Feminists stepped forward to share their painful history with the TERF movement. Several instances on TERF violence (and even terrorism) were uncovered and the actual history of the TERF movement has become clearer:

Several other outlets wrote about TERFs during #TERFweek and many people were made aware of this anti-trans hate movement.  Moreover, the #TERFweek tag served two purposes:

On both of these counts, the tag worked well.

#TERFweek has created a historical record of systemic TERF violence and aggression while providing a nuanced and critical review of TERF ideology. We heard from only sources that that they felt that #TERFweek was unnecessary. Alternatively we received many thanks for having a week of consciousness raising that culminated in a body of work that factually documents and critiques the TERF movement.

TERFs will never again be able to claim that theirs is a nonviolent movement. In fact, their movement has a history of happily embracing real acts of violence and even armed terrorism. We’ve debunked numerous myths and, in the process, showed that TERFs, far from being a benign group of internet trolls, have a long and painful history of doing real harm to those they target – be they trans or actual Radical Feminists who resist being colonized by TERFs.