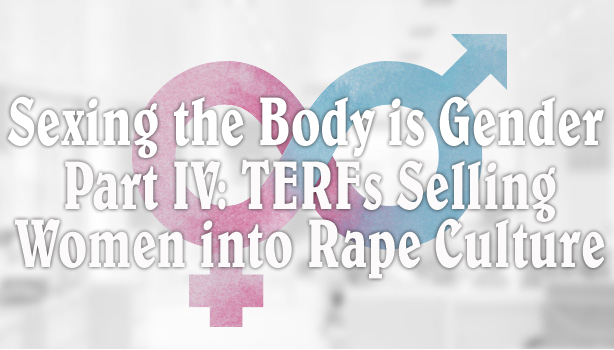 Note: If you’ve not done so, please read Part III: Debunking TERF Essentialism, as this piece draws upon the debunked TERF ad naturam essentialism concepts – the “essence” of what makes one male or female – commonly found within TERF rhetoric.

Chivalry culture is the flip-side of chauvinism and together they are part of the same rape culture coin. Promoting the idea that some people are inherently submissive because female-essence – and therefore need some form of cloistered safekeeping – and that some people are inherently dominant because male-essence – and are in need of institutionalized restraint – is patriarchy. Moreover, it is a standard TERFs explicitly perpetuate.

TERFs are to rape culture what FOX News is to terrorism. Rape, like terrorism, is very real and damnably horrific. While it is important to educate about these horrors, some organizations use these horrors to perpetuate certain agendas. FOX News uses terrorism to scare people into becoming political right-wingers and TERFs use rape to scare “naturally female-essenced” people into becoming political lesbians.

“When a woman reaches orgasm with a man she is only collaborating with the patriarchal system, eroticizing her own oppression.” – Sheila Jeffreys, PhD

Bullshit. Rape culture isn’t about some sexed essence having an inherent dominant or submissive innateness; it is about perpetuating harmful strategies for contextualizing power… You know, just like Sheila Jeffreys did in the above quote. Rape culture is more complex than some sexed essence. When we look at power systems built on domination and submission, what do they produce? The National Survey of Youth in Custody report said, “Among the estimated 1,390 youth who reported victimization by staff, 89.1% were male [inmates] reporting sexual activity with female staff, and 3.0% were males reporting sexual activity with both male and female staff.”

What are we to make of this published data? Do children require some form of cloistered safekeeping from female-essence people? Are these female-essence people child rapists because child rape has something inherently to do with being female, or is this behavior about how a specific culture contextualizes power[1] and how that plays out upon subordinate classes? When naturally female-essenced people perceive themselves privileged to hold, wield and use power upon subordinates – within the context of a cultural system – they rape; moreover, they are willing to even rape caged children.

When it comes down to it, TERFs merely pimp out the real suffering rape victims. They debase the lived trauma of rape for its power as a mere discursive tool. In short, TERFs use rape.

In TERF rhetoric, rape is used to motivate female-essenced people to view all trans women as likely rapists. Worse, in their gleeful willingness to make the pain and trauma of rape and physical abuse about trans woman, their dogma helps hide the rape and domestic violence (DV) issues within the lesbian community itself.

The reality is that anywhere from around a quarter to almost half of lesbians experience DV and rape in lesbian relationships.[2] Furthermore, the physical abuse rates of heterosexual and lesbian couples aren’t all that different. In fact, this secret is referred to as “the second closet.”

All transsexuals rape women’s bodies by reducing the real female form to an artifact, appropriating this body for themselves… Transsexuals merely cut off the most obvious means of invading women, so that they seem non-invasive. – Janice Raymond, Ph.D., The Transsexual Empire, The Making of the Shemale, p 104

When people like the award-winning TERF journalist Victoria Brownworth, assert, “Michigan isn’t about transphobia–it’s about safe space for lesbians,” such claims ring hollow when the reality is that the MWMF won’t address rape within its own community. It rings hollow when TERFs don’t write about it, talk about it or educate about it. Such claims have little meaning when the problem of rape and abuse is so erased that victims call it “the second closet.”

TERFs want you to associate the pain of rape with trans women. They manipulate real trauma and use its pain to discriminate against a community of rape and rape-affected survivors. While around one in every two trans women are rape victims[3], TERFs use rape to stigmatize trans women as rapists. Moreover, they use rape to sell feminism on their own brand of chivalry culture.

Some TERFs bandy about the slogan “name the problem: male violence,” oblivious to their own hypocrisy. The name of the problem is rape culture and TERFs are part of the problem.

[1] Consider the way in which a TERF privileged herself in getting a trans youth to expose their genitals to her and how the TERF community endorsed this behavior. [2] Consider the following peer reviewed findings: [3] On the rate of rape within the trans community:
Cristan Williams
Cristan Williams is a trans historian and pioneer in addressing the practical needs of underserved communities. She started the first trans homeless shelter in Texas and co-founded the first federally funded housing-first homeless program, pioneered affordable health care for trans people in the Houston area, won the right for trans people to change their gender on Texas ID prior to surgery, started numerous trans social service programs and founded the Transgender Center as well as the Transgender Archives. She has published short stories, academic chapters and papers, and numerous articles for both print and digital magazines. She received numerous awards for her advocacy and has presented at universities throughout the nation, served on several governmental committees and CBO boards, is the Editor of the TransAdvocate, and is a founding board member of the Transgender Foundation of America and the Bee Busy Wellness Center.