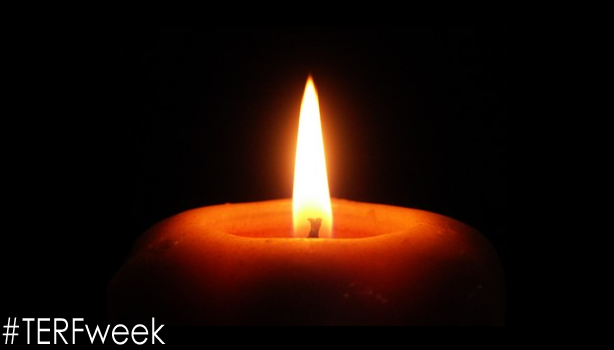 Before you read further, I need to state a strong Trigger Warning: The following post recounts the circumstances surrounding the suicide of a trans women.

Filisa Vistima was a 22-year-old transsexual woman from Seattle who had not been able to access the type of trans medical care she needed. She volunteered at the Lesbian Resource Center (LRC) and on March 6, 1993, Filisa took her own life after handling feedback from TERFs demanding that people like her be banned from the Center.

Sometimes when I am walking outside on a clear night I will look up and try to find my home among the stars. I must try to do something out of my bedroom. I am becoming depressed, suicidal even. I spent the entire day inside. Um, yes, I did say suicidal. I have a steady stream of thoughts about utter hopelessness, thoughts about where to kill myself and how, that won’t just go away.

Maybe if I did get a job it would only make me suffer longer. I don’t like to see living things suffer. I wanted to do so many things. I wanted to help people. I had recently thought I could become a role model for girls who want to become a mathematician or a scientist.

My sexual orientation: It is a subject I have been questioning over the last month. I was tempted to submit a posting to 28 Barbary Lane [queer computer network] stating that I no longer believe I am a lesbian and that I am better described in relation to my affectional desires.

I found a term to describe me while reading through a newspaper I got at Evergreen. The article used the term “affectional orientation.”

Also, I believe it to be overly simplistic to identify oneself based solely on with whom they sleep.

I was volunteering at the LRC today.

Even under casual conversation, I felt uncomfortable and unstable. I cower under scrutiny.

My affectional and sexual desires have become blurred; I have them both, I believe. I don’t usually have them when in public. Sometimes I would feel attracted to someone if i could gather something from their body language. A woman somewhat like me, perhaps: shy, scared, vulnerable, alone. I want to touch her and fall asleep in her arms. I can’t imagine ever getting enough affection. My own insecurities close me in when in public; in private all my unfulfilled desires are pulling me in all different directions. There is nothing amazing about my dysfunctionalities; it is an all too logical result from my problems.

I am much too likely to do something irrational and impulsive someday soon.

I went with [name withheld] to the other Chicken Soup Brigade thrift store…. On the way back, I met a dog. When I first saw her, she was barking at me, then I saw her wag her tail. She was a golden retriever and locked behind a fence. When I got very close to her, she put her body against the fence so her fur would stick through the gate: she wanted to be petted!

I did pet her. She seemed to be starved for affection, just like myself. As I was petting her, I saw a lock of my hair fall into view, her fur on her back was the same color as my hair. Her fur became lighter down the sides of her body. I wanted to let her go, to keep her. We would be two lonely animals, content with each other.

When I stopped petting her and took my hand out from the cage, she barked and turned around so I would stay and pet the opposite side of her. I eventually did need to leave my new friend, even when she barked for me to stay.

I am encountering many old desires of mine, e.g. swimming. By the comments [name withheld] has mentioned to me (“Your hands are large,” “You’re shaped like a boy” and so forth), I have been self-conscious of myself. I wish I was anatomically “normal” so I could go swimming.

If i was “normal” I would no longer have any reason to hide behind my clothes other than to hide my modesty. I could go swimming without clothes… I would love to do that so much!!

But no, I’m a mutant, Frankenstein’s monster.

Now I am feeling the same feeling I had some days ago but forgot about them, the feeling that I hate myself, the physical self. I remember having these feelings when I was a child, hitting thighs with my hands so I would cry. I’m, crying now…

I am reminded of a sentence in my Masculine/Feminine book stating: “In Freud’s logic, those who struggle to become what they are not must be inferior to that to which they aspire.” It refers to Freud’s theories about women who are really castrated males and who aspire to become phallic, male. In my case, there is a little difference in the logic. At the moment, however, I must say, that I feel inferior to “real women” and I may never be able to resolve the conflict.

I received a letter from Evergreen today. It stated that they did not receive the transcripts from the previous colleges at which I studied before their deadline…

I somewhat expected this conclusion, but I did not plan for what I should do if I did not get accepted at Evergreen. I still wish to move, to be in a much less urbanized environment. My public assistance will terminate shortly. My apocalyptic visions are currently dreamy, less than real.

I will again be forced to make feeble attempts to save myself. Can I wait until fall to go to school? My hope for a potential niche has been obliterated. I’m confused. I do not know what i should do.

I now only have an infinitesimal chance to find my niche. Before, I did have a hope. If certainty of finding my niche were to be granted to me, and if I was convinced of this certainty, I would be ecstatic, completely ecstatic.

Maybe I will be able to wait eight more months for that opportunity to be again afforded me… [Pendra] has been feeling upset today… she told me that she may need to leave Seattle and move back to Canada. She really likes it here. She also said that she may need to marry someone so she can legally live in the USA. After a few moments, I thought she could marry me. Why not? My birth record has not changed. I would be very interested to see if this could be accomplished. I find the idea of marrying a woman amusing because same sex marriages are still not legally recognized in the United States…

I need a plan, otherwise I will go mad. If I no longer receive public assistance we could just remain here until we get evicted. This isolation is making me frustrated. Outside is boring. Grey concrete, grey asphalt roads, grey buildings… it is a visually deficient landscape….

I would like to volunteer at an organization which helps the emotional needs of children with AIDS or children of HIV+ parents. I must be able to dedicate my time to a child for at least one year. I do not know if I will be in Seattle for a year. I do not know anything.

I no longer feel a part of any community. I have no home. Maybe in this life I was not destined to live long. I am too different. I cannot adapt. I have no future.

What is keeping me from killing myself?

My relations with people have grown so distant. No one who I care about will miss me; no one loves me. How can I continue to live based on the assumption that I will someday contribute to this society.

I should have the right to be selfish.

My grief and unhappiness have been too great. I probably was supposed to kill myself when I was 16. Do I not have the right to decide when my suffering is too great?

From what I can ascertain, prior to her Filisa’s death, she was made responsible for entering data from a Lesbian Resource Center (LRC) survey asking their service population if they felt that the LRC should continue to provide services to trans women. TERFs had taken a hard line against providing services to transsexuals and Filisa was the one who had to record each venomous TERF objection just prior to her death.

The stigmatization fostered by this sort of pejorative labeling is not without consequence. Such words have the power to destroy transsexual lives. On January 5, 1993, a 22-year-old pre-operative transsexual woman from Seattle, Filisa Vistima, wrote in her journal, “I wish I was anatomically ‘normal’so I could go swimming…. But no, I’m a mutant. Frankensteins monster.’ Two months later Filisa Vistima committed suicide. What drove her to such despair was the exclusion she experienced in Seattle’s queer community, some members of which opposed Filisa’s participation because of her transsexuality—even though she identified as and lived as a bisexual woman. The Lesbian Resource Center where she served as a volunteer conducted a survey of its constituency to determine whether it should stop offering services to male-to-female transsexuals. Filisa did the data entry for tabulating the survey results; she didn’t have to imagine how people felt about her kind. The Seattle Bisexual Women’s Network announced that if it admitted transsexuals the SBWN would no longer be a women’s organization. “I’m sure,” one member said in reference to the inclusion of bisexual transsexual women, “the boys can take care of themselves.” Filisa Vistima was not a boy, and she found it impossible to take care of herself. Even in death she found no support from the community in which she claimed membership. “Why didn’t Filisa commit herself for psychiatric care?” asked a columnist in the Seattle Gay News. “Why didn’t Filisa demand her civil rights?” In this case, not only did the angry villagers hound their monster to the edge of town, they reproached her for being vulnerable to the torches. Did Filisa Vistima commit suicide, or did the queer community of Seattle kill her?