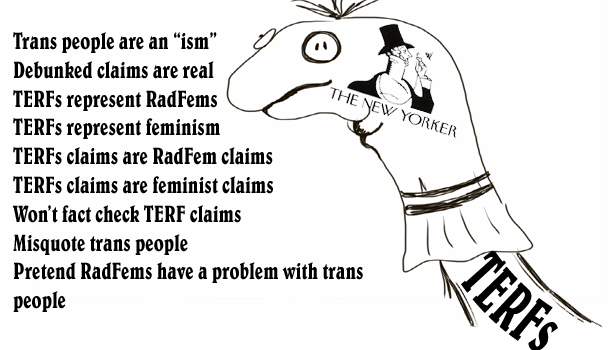 Michelle Goldberg’s awful article in The New Yorker will be considered by many to be just another example of the sort of biased rubbish trans people have come to get used to from the media. This kind of article is the sort of thing that (dis)graces plenty of TERF (Trans Exclusionary Radical Feminists) sites and marginal online publications that try to be ‘edgy’or ‘iconoclastic in the knowledge that having a go at trans people is the last refuge of those who can no longer get away with other forms of bigotry.

However, it should not be dismissed so readily. This article was written by someone who knows the subject well and wanted to present a particularly one-sided view in a major publication.

I have obtained the opinions of a number of cisgender people about the article, including that of the editor of The New Yorker, David Remnick. The problem with the impressions of all the cisgender people I know who have read it, is that they all perceive it to be well-balanced. In other words for people who are not trans, who know little or nothing about trans issues and who are not knowingly acquainted with any trans people, think Michelle Goldberg’s article was even-handed.

The combination of general ignorance about trans issues and, in my view, disingenuous journalism has resulted in a seriously biased article being passed off as balanced journalism. So this is not just a simple case of one-sided reporting of the sort trans people have become accustomed to.

The problem is this; if someone writes a biased article for The New Yorker about, say, Gaza or Obamacare or about economic policy or whatever, it will be easily apparent to large numbers of people that the article is one-sided, and the media platform will lose credibility. Omitting important information, selectively quoting people interviewed to the extent that their quotes become meaningless, or are totally misquoted, and treating discredited information or points of view as unproblematic are all things that would be spotted a mile off, not merely by editors but by most readers. However, this is not the case when it comes to trans issues in general and TERF hatred of trans people in particular. Indeed I would argue that there is no balanced view achievable of the problem of TERF-ism

I say this because as soon as you include all information, quote your sources fairly and include critiques of points of view that one side considers self-evident, the arguments and revelations stack up against the TERFs pretty quickly, such that “balance” is unachievable. This is a game that TERFs like to play often; trading on the lack of knowledge in the general populace in order to try and give their twisted ideology of hatred an air of credibility.

Firstly the title; she uses the word “transgenderism”. Framing transgender people as an “ism” is a tactic commonly used by TERFs. TERFs use it because it enables them to dehumanize trans people. Yes, that is “Trans PEOPLE.” Trans people are people; we are not adherents to some odd cult, nor are we suffering from an illness as ‘transgenderism’ might suggest. A de-personified noun, eliminating the need to call trans people people is the first step on the road to persecution. We have seen this occurring throughout history, as dehumanization makes it easier to oppress and harm. The fact that Goldberg uses this word in the title speaks volumes about her and her initial standpoint. In essence, it is like hanging a neon sign with 5-meter-high letters that say “transphobe” bright flashing letters.

Goldberg’s one-sided presentation of the alleged abuse or harassment of TERFs by trans people is a prime example of her bias, citing a TERF complaining about supposed abuse from a Twitter account she says is controlled by a trans person. Yet while Goldberg swallows TERF accusations of harassment unquestioningly she ignores the industrial scale of TERF harassment of trans people. With sites like Gendertrender and Dirt controlled by anonymous TERFs who abuse, slander, harass, out and dox trans people, the harm caused by these sites makes any name-calling by isolated, unhappy and marginalized individual trans person pale into insignificance. She also ignores how, for example, TERFs colluded with a right-wing “Christian” hate group to dox a 16-year-old trans schoolgirl who had been subject to death threats online. This sort of harassment appears to be increasingly common and increasingly vicious.

Goldberg also seems to swallow whole the TERF assertion that trans people are trying to ‘silence’ them. The reality is very different; since last year a number of TERFs have issued legal threats against trans people, and even against a lesbian online magazine, Lesbilicious in order to try and prevent us speaking out about TERF activities. One TERF “academic” has even gone to lengths to cover up her own online bigotry and prevent trans sites from talking about her.

To get a bit more detailed and technical for a moment; Goldberg suggests that trans people claim an essential gender identity, while TERFs reject this, supposedly as anti-essentialists. In fact, essentialism is anathema to most feminists, and it is the TERFs who are using essentialism; to them, if you are born with a vagina you can never be a man, biology is destiny. This ignores the majority of feminist thought since Simone de Beauvoir declared, in 1949 that “one is not born a woman, one becomes one.” In reality, TERFs subscribe to essentialist ideology as a means of bullying and excluding trans people, whereas trans people are probably less likely to subscribe to the ideology of essentialism than cisgender people.

So, to sum up so far; Goldberg is beginning to sound like a political spin-doctor by now, turning everything to its opposite; trans people are harassed in large numbers by TERFs, yet she tells everyone it is the other way round. TERFs have been using their better economic resources to silence trans people for a couple of years now, yet she insists we are silencing them. She paints trans people as largely essentialists when the TERFs are the essentialists. You can see the pattern emerging….

Goldberg also swallows the TERF accusation of “autogynephilia” completely whole, without any apparent research or understanding what autogynephilia was (I say was, because no-one beyond this group of TERFs and a small number of loopy right-wing psychiatrists considers autogynephilia to be a thing now). It was supposed to be a psychological condition that has been so discredited that recent peer-reviewed research published by Charles Moser has shown that, if it does exist, 93% of all cisgender women have autogynephilia. It is supposed to mean “attraction to yourself as a woman” and is so obviously based on a cisgender heterosexual male view of sexuality that it is about as credible as $9 bill. As far as I am aware the number of people actually diagnosed with autogynephilia can be counted on the fingers of one finger.

Of course, this does not matter to Goldberg, she plows onwards with a one-sided view of TERFism to the extent that one of the trans people she interviewed has publicly complained about being misrepresented.

Furthermore, the way Goldberg eulogizes Janice Raymond makes it appear that those who oppose her form of anti-trans activism have no cause to complain and are simply engaging in silencing a legitimate voice. Goldberg deliberately ignores the reasons why trans people are others view her as they do and oppose her poisonous “scholarship”. Despite digging up a sycophantic contemporary review of her most notorious book The Transsexual Empire, (and surprise,surprise ignoring Roz Kaveney’s contemporary critique of it) she fails to mention the most famous quotation from it, where Raymond says “I contend that the problem with transsexualism would best be served by morally mandating it out of existence”. This is the only time I have ever experienced what, in my opinion, amounts to incitement to hate crime in a supposedly ‘academic text.

Goldberg also ignores some of Raymond’s other activities such as working with the Reagan government to have healthcare for trans people removed from health insurance provision. Many people regard this as causing the deaths of many hundreds, if not thousands of mostly black and Hispanic trans women, because it left them with no alternative to sex work to try and fund their transitions.

The reality is that there will be more “journalism” like this in the coming months. They trade on editorial ignorance and it’s telling that they feel they must resort to spin in order to make their hate look like something other than what it is. It is the only argument left to those opposing us.