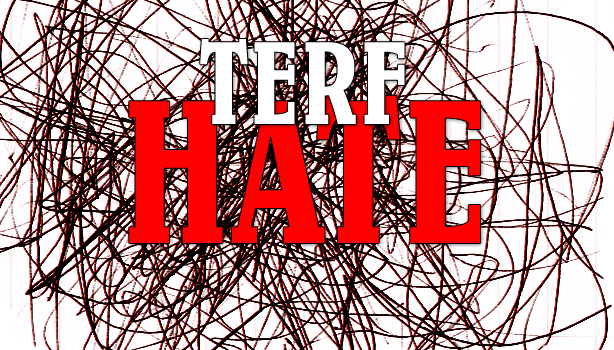 What follows is a continuation of my interview with Radical Feminist lesbian icon, Robin Tyler. In the previous piece, Tyler talked about being beaten by TERFs for trying to protect a trans woman from their assault. In this portion of the interview, Tyler describes how a TERF’s fist at the Michigan Womyn’s Music Festival (MWMF) led her to conclude that it was time for her to start her own women’s music festival. Along the way, Tyler connected me with others who were part of Tyler’s trans-inclusive women’s festivals.

Robin Tyler: I performed at Michigan, I think, two times. The first time they told me that I was too butch. The next year I was the line producer and, I’m from Canada, and some women had been held at the border and some Canadian women at the festival asked me if I could get NGLTF to help us. When I took it up with Lisa Vogel, she said “Absolutely not!” because NGLTF is an organization with men in it! Talk about fundamentalism!

So, I went on stage to raise the call for help anyway. I made the announcement on stage and we were able to get NGLTF involved and their lawyers were able to get the women released. But, the next day Lisa Vogel said that she wanted to talk to me in the woods. She was really angry with me. Some Canadian women followed behind us because she was so mad. When Lisa raised her fist to hit me I told her to turn around, because the Canadian women were behind us and was watching what was going on.

So, instead of struggling with Michigan [MWMF], I decided that I would start my own festival. I wanted to do something that wasn’t such a fundamentalist festival.

Cristan Williams: So, can you tell me about how trans women became part of the West Coast Women’s Music Festival?

Tyler: We were told that if we were going to have the festival, we had to have a fire captain there in order to have the festival. So, I got in touch with Michele [Kammerer, an out trans woman fire captain] and asked if she would like to come to the women’s music festival, and that’s when she started coming, but there were other trans people there and nobody had an issue with it.

Williams: MWMF spends a lot of time talking about how trans women can make women feel unsafe. Was that an issue for your festival?

I understand people being victimized and sexually abused. But if you remain a victim and you don’t work on these issues, what tends to happen is that the victims become the persecutors. For all people – trans or not – the idea is that we’re working on getting better. These places are about getting better. We have to work on getting better so that we don’t oppress other people.

When I introduced Michele in front of all the coordinators, I said, “This is Captain Michele, she’s trans, and, does anyone have a problem with that?” and nobody said anything and so I said, “Then let’s welcome her!” and she got a standing ovation. I want you to understand that a lot of my workers came from the MWMF. A lot of women who attended the West Coast Women’s Festival – at one point we had 3,000 people there – has attended Michigan too.

I mean, if a lot of the attendees came from Michigan and a lot of our workers were workers at Michigan, and nobody had a problem with trans women at the West Coast Festival, why was there a problem in Michigan?

I think that it has a lot to do with the way leadership presents the issue. I mean, if someone had had an issue with trans women at my festivals, I would have spoken with them, but I wouldn’t have thrown out trans women.  I think it just comes down to how leadership chooses to present the issue.

So, when I read about these [Michigan] folks not feeling safe, you get people together and you dialogue so that those who don’t feel safe can get better and feel safe around trans women. But, like I said, we never had to something like that at our festivals because it wasn’t a problem.

At this point, Robin Tyler put me in touch with Jan Osborn, build coordinator* of Tyler’s festival. Osborn is a Radical Feminist Dyke who began organizing on the west coast in 1978, starting a feminist consciousness-raising and a domestic violence group. She later moved to Florida to fight against Anita Bryant’s “Save Our Children” group and work on the Equal Rights Amendment.

Cristan Williams: How did you become involved with the Music Festivals?

Jan Osborn:  We had a little group – it was sort of an outgrowth of that feminist consciousness-raising lesbian group – we had heard about this festival down at Camp Mather and we went down to that. It was actually the second one that Robin had done at Camp Mather. We were volunteer workers, so we were there the week before the festival. I went to Florida, and then I heard about a festival up in Georgia, and I went to that one, and from then on, I worked pretty much every festival Robin did.

Williams: So, one of the things I was talking with Robin about is the way she worked with the transgender community in her festivals.

Osborn: Right. It was never an issue.  Michele Kammerer was a Fire Captain out in the LA area and she transitioned while she was at the fire department. When Michele came out, it was a real coup for Robin because the county we were in had decided that it wanted to get rid of all these lesbians who were invading their peaceful town and so they passed a rule that large gatherings had to have a captain or better of a fire department in the group.

Williams: Oh wow, so she helped save the festival from being shut down?

Osborn: Yes, but it was also great to have a firefighter on the crew!

Williams: Robin was telling me about how Michele was introduced to everyone and it went really well.

Osborn: You’ve got like 150 workers and we become really tight while you’re there. I mean, we’re still friends. I mean, I remember having a discussion about this with Molly Yard, the President of NOW at the time, and she was like, “Why would we want to discriminate against a group a group of women who happen to have not been born with two X chromosomes or lesbians, for that matter?”

Williams: What are your thoughts about the MWMF “womyn-born-womyn” policy?

Again, I just don’t recall any hubbub over the trans issue. I mean, because we cared about each other we cared about the process Michele would have to go through, but it wasn’t about judgment. We just cared about each other. I just remember being concerned about the enormity of what trans people were having to go through and being respectful of the fact that these women were willing to face it. That these women are having to still deal with discrimination from places like Michigan, it’s just awful.

I was then put in touch with Michele Kammerer, the trans woman who served as the Fire Captain for Robin’s festival.

Cristan Williams: Can you tell me about how you came to be part of Robin’s festival?

Michele Kammerer: There was a permit requirement because this was in the woods. She found me through an acquaintance of mine who had helped Robin in the past.

Williams: Robin had talked about introducing you at the festival and that you were cheered. Can you tell me about that?

Kammerer: Robin would get on stage and make announcements and she did. What was interesting was that she made a point of talking about MichFest’s trans exclusionary policy and that our fire coordinator, Captain Michele, a trans women is here with us and we’re glad that she’s here because we couldn’t have had the festival without her. Yeah, I thought that was pretty cool that she would do that on the main stage.

I mean, I was really honored and humbled to be there. And excited, I was really excited to be there and when she asked me to help out, I answered in the affirmative right away! Of course, I had some trepidation about going out there, but I really loved being a part of that whole experience. It was really fun, because we were all there working together to make it all happen.

I was at this point that Michele mentioned that her spouse had started what became Camp Trans after her friend, Nancy Burkholder, had been thrown out of the MWMF in 1991. I then interviewed Michele’s spouse, Janis Walworth about how she, a pissed off cisgender radical lesbian feminist, with bodyguard protection from the Lesbian Avengers, formed what became Camp Trans to protest the exclusion of trans women at the MWMF.

Next in this series: How TERF violence inspired Camp Trans

*Correction: A previous version of this misidentified Jan’s festival title. Jan was a Build Coordinator, not co-producer.

This article is part of an ongoing series exploring trans issues with feminist opinion leaders: