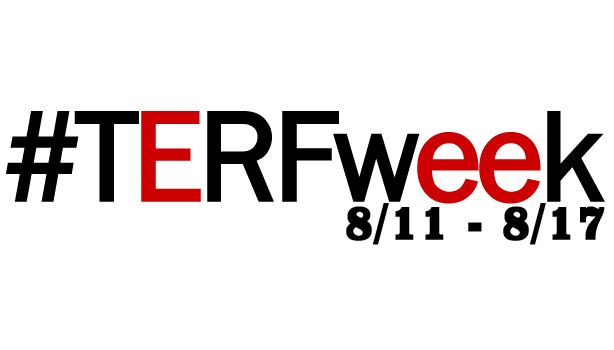 #TERFweek is a week of education, raising awareness and openly talking about the abuse our communities have endured at the hands of the Trans Exclusionary Radical Feminist movement. From Monday, August 11 to the 17, we invite everyone to share their experience with the TERF movement using the #TERFweek tag. We hope that all our diverse communities will take this opportunity to speak with one voice, united in standing in opposition to the hate and very real harm this group has caused.

With the uptake of TERF rhetoric within the mainstream media and academia alike due to the publication of Sheila Jeffrey’s new anti-trans book, Gender Hurts, we felt that it was time for the voices of those who are often targets of TERF malice to speak up about their experiences. Far from being a benign group of bombastic blowhards, the TERF movement impacted the lives of every trans person in America for generations. They’ve driven trans people to suicide, outed trans kids to their schools, outed trans adults to their employers, attempted to interfere with direct medical care their targets receive, and have proven that they will even work with anti-gay groups if it means furthering their obsession in targeting transgender people.

#TERFWeek is about education and empowerment through naming a shared history of oppression, pain and suffering. It’s about openly grieving the lives lost to the TERF movement and talking about the suffering TERFs have inspired over the last 40 years within not only the trans community, but within the feminist, lesbian and radical communities. It is about opening up a dialogue of how TERFs aggressively colonized the Radical Feminist identity and aggressively (sometimes violently) claimed control of feminist spaces.  It is about clearly articulating the fallacious nature of the claims TERFs continue to make within all forms of media.

For more than 40 years, what amounts to a hate group has been hiding out within progressive movements, targeting trans people and their allies in the name of women, the lesbian community and feminism itself. Therefore, #TERFWeek seeks to:

In addition to a detailed critique of the foundational falsehoods of TERF ideology, we will feature the stories of those affected by TERF hate. You will hear a mother talk about how she and her young daughter became targets of TERF hate, you will hear from cis women who became targets of TERF hate because they dared support trans people and you will hear from Radical Feminists who are tired of having the RadFem identity automatically associated with a  group obsessed with targeting the trans community and its allies.