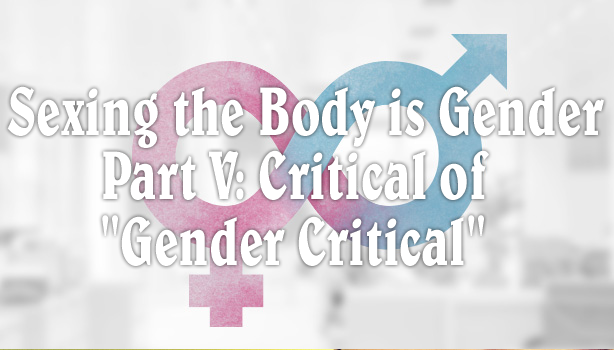 Many of the TERFs I’ve had the displeasure of meeting move through life belligerently sexing physical phenomena and behavior (especially rape) while simultaneously (and ironically) proclaiming themselves to be critical of gender.  For TERFs, there is no difference between mentally contextualizing a body as a sex attribute and the body itself.

TERFs have such a long history of, with all the asperity of a hellfire creationist, asserting that sexing everyone is better/different/more natural than gendering everyone that I hold no hope they will see past their own obtuse equivocations. Theirs is a movement that’s not even wrong, full of bombastic trolls who are sure that if trans people would just take up their sex labeling system, they would have dealt a serious blow to the oppression women face.

When a TERF asserts that gender must be obliterated before women are free they are either equivocating about what gender and oppression are or they are demanding the unattainable. When a TERF asserts that gender is an oppressive system that must be abolished, all one need do to reveal the inherent fallacy of their ideology is to ask what they would change about gender. A TERF will oblige you by describing a new set of taboos, norms, language and identity labels all must adhere to. After they’ve described their new cultural system, they will ironically assert that the new normative sex system is somehow not gender and that under the rubric of their new system, all are liberated.

The human need to contextualize phenomena isn’t going to be eradicated and in that regard, the abolition of gender is not possible. Having said that, there are the practical steps we can – and do – take to undermine oppressive systems of power contextualization. One of the reasons I do abortion clinic defense each week is that I understand that supporting the ability to choose one’s biological destiny has everything to do with breaking down patriarchal systems of oppression (for an ironic laugh, ask a TERF about the last time they did abortion clinic defense). The social justice work that I do is aimed at codifying a more equitable society partly because equality isn’t conducive to the flourishing of kyriarchal systems of oppression. The thicket of intersectional oppression women face isn’t defeated though the window dressing of forcibly imposed label systems; rather, it is defeated by upturning systemic power inequalities which are invariably linked to and rely upon intersectional systems of oppression (poverty, racism, fundamentalism, etc). [1]

In its simplest form, gender arises from the mind’s inherent and unending instinct to note that A is like B and C while being different than X, which is itself like Y and Z. For gender to truly abolished, this hard-wired mental process must not exist. Since this process exists as a relational state within the mind, each person’s subjective experience will be, in some ways, at least somewhat unique. These unique perspectives will inevitably invite discourse, giving rise to collective norms and taboos which become cultural systems influencing human behavior to one degree or another.

While working to understand, deconstruct and attack how power is oppressively contextualized within the collective experience of gender is critically necessary, useful and beneficial work, framing gender itself – and not oppressive power contextualization – as the problem is a bit like saying that all forms of currency itself – not crony capitalism, etc – is the problem. In the same way that humans will buy and sell goods and services using favors as social currency or more sophisticated concepts of currency, no matter what, humans will continue to contextualize the subjective and collective experience of having bodies with sex attributes. 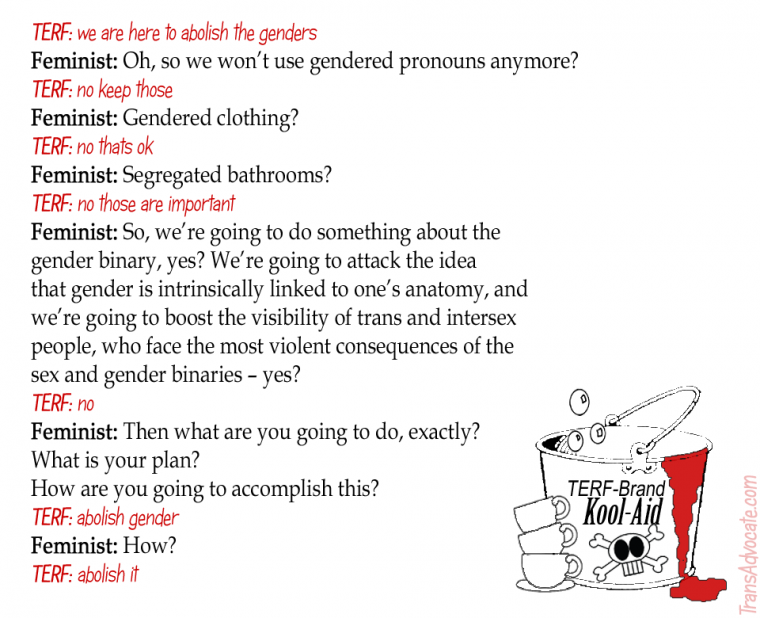 Instead of questioning the embedded patriarchal value some TERFs place on “masculine” expressions of self, they’re happy to attack trans men in an attempt to force these men to adopt the gender system preferred by TERFs. Instead of questioning their own discursive materialization of sex, they instead obsessively police the sex contextualization of everyone else. Consider the need of the following TERF to manufacture a sexed lens through which people should view me.

Here, the construct is that I am still that which is pictured, and my name is not my name. This is another example of how TERFs do gender. When a TERF asserts that a trans woman is male, insists upon using male pronouns, uses the person’s old name/old picture to construct a sex context for the trans woman to occupy within a cultural system, they are engaging in forced gender performance.

When a “gender critical” TERF uses cultural labels to forcefully contextualize the sex of another as belonging to an absolutist binary system, they are constructing and forcibly enforcing contexts in which trans and non-trans people must be understood. This is gender performance and moreover, far from being radical, such contextualizations are firmly rooted in culture. Forcing their cultural labels upon the unwilling bodies of trans people is the very gender performance they pretend to critique.

[1] “That feminism has always countered violence against women, sexual and nonsexual, ought to serve as a basis for alliance with these other movements, since phobic violence against bodies is part of what joins antihomophobic, antiracist, feminist, trans, and intersex activism” – Judith Butler, Undoing Gender, p 9
Cristan Williams
Cristan Williams is a trans historian and pioneer in addressing the practical needs of underserved communities. She started the first trans homeless shelter in Texas and co-founded the first federally funded housing-first homeless program, pioneered affordable health care for trans people in the Houston area, won the right for trans people to change their gender on Texas ID prior to surgery, started numerous trans social service programs and founded the Transgender Center as well as the Transgender Archives. She has published short stories, academic chapters and papers, and numerous articles for both print and digital magazines. She received numerous awards for her advocacy and has presented at universities throughout the nation, served on several governmental committees and CBO boards, is the Editor of the TransAdvocate, and is a founding board member of the Transgender Foundation of America and the Bee Busy Wellness Center.