What does "transphobia" mean to you? © Kama

Having observed numerous conversations predicated on fundamental misunderstandings concerning trans advocacy, I put together this TransAdvocate 101 to compliment our Trans 101. If cis and trans advocate communities wish to better communicate, we need a foundation from which informed conversations may take place. Therefore, I will succinctly: Describe the three fundamentals informing our approach to trans advocacy; Describe the differences between the cis and trans experience as it relates to “gender identity;” Describe the difference between Gender Dysphoria and Gender Identity… Read more. 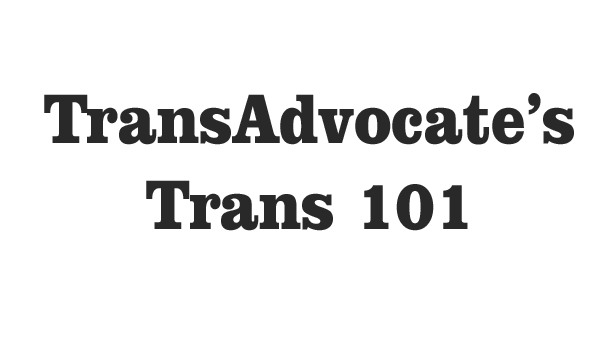 Fascism and transphobia are ALWAYS linked

Anti-feminism, anti-Semitism, homophobia, transphobia, xenophobia, and racism are THE entry points to fascism. Remember, the FIRST Nazi book-burning was the burning of books from a trans clinic. Given that, would it surprise you to know that Hitler was quoted to motivate Trump's insurrectionist crowd? "Hitler was right..." - Rep. Mary Miller (R - Ill.) While not all anti-trans activists are fascists and Nazis, anti-trans hate is a popular recruitment tool for fascists and Nazis. Whether it's religious nationalists or so-called… Read more.

The Trans Disaster Relief Fund (TDRF) sent out an urgent request for donations to support transgender individuals and other members of the LGBTQI+ community during the current Coronavirus emergency. The transgender community is uniquely at risk during this emergency because of a higher than normal incidence of unemployment, homelessness, and lack of access to quality healthcare. Dr. Paige Padgett with the University of Texas School of Public Health said, “on any given day, the trans community faces significant discrimination.” She… Read more.

Do you fear trans people and want to rationalize the simmering hate you feel? We here at the TransAdvocate have spent almost 2 decades debating and debunking anti-trans nonsense and we've learned a thing or two about the irrational knots bigots tie themselves into when they try to pass off their fear and hate as fact and reason. Therefore, we've put together this handy-dandy list of the BS arguments that you, a budding bigot, are likely to find really, really… Read more.

If transgendering is a thing, then so is cisgendering

Anti-trans sex essentialist activists love to pretend that "transgender" is a verb for the same reason anti-gay activists like to pretend "gay" is also a verb. If being gay or trans is a mere matter of behavior rather than selfhood, then people can just stop the behavior that makes them gay or trans. This is the basic idea behind anti-gay and anti-trans conversion therapy. Nevermind that this belief about gay and trans people is… Read more.

What the Trans Moment Has to Offer Radical Feminism (Part Two)

Lately I have read several trans-inclusive feminists take apart the notion that biological reproductive capacity holds any functional validity as a marker of who gets to belong to the category woman. Read more.

JK Rowling, author of the Harry Potter series, announces that she is a TERF

JK Rowling has long hinted that she sympathized with sex essentialist so-called "radical feminist" idea that nobody's phenotype is transitioned when trans people medically transition, and thus, trans women are males and trans men are females. However, Rowling has now openly announced her public support of TERF ideology: The backstory for this seemingly innocuous tweet is that a TERF activist, Maya Forstater sued to be given the special right of consequence-free speech. Such suits are a relatively new frontier of… Read more.

The topic engenders polarized debate within the transgender community. Nowhere more than on internet support groups where, in the same thread, you will see some regard it as lifesaving and others as “frankendicks” that lack sensation and are “never good enough.” This body shaming would be unacceptable in any other context, yet it is routine with phalloplasty. There are several possible reasons for this. The scarcity of surgeons and funds to pay for surgery can cause some to decry these… Read more.

Today the Merriam-Webster announced the addition of the singular non-binary pronoun, they. The nonbinary pronoun 'they' has been added to the dictionary. https://t.co/tadl1VdfB0 — Merriam-Webster (@MerriamWebster) September 17, 2019 In an interview with the TransAdvocate, Merriam-Webster representative Emily A. Brewster said the following: Evidence for they as it is used to refer to one person whose gender identity is nonbinary is increasingly common in published, edited text, as well as all over social media and in daily personal interactions between… Read more.

If you know anything about the queer community, you're familiar with the stereotype of the closeted dude who lives a lie by pretending to be Mr. Manly Man. You know, the guy who can't shut up about how trans people totally gross him out and how he's totally all about straight-cis identity politics? The guy who makes his entire life revolve around the very public promotion of the idea that he's the embodiment of guns, god, and them-there good ol'… Read more.

Philadelphia International Airport (PHL) is hosting the first Job Fair for TransWork on Tuesday, September 10, from 3-5 PM, at the William Way Community Center at 1315 Spruce Street. The Airport, which is owned and operated by the City of Philadelphia, has partnered with TransWork, a program of the Independence Business Alliance, whose goal is to increase access to opportunities for transgender people in the Greater Philadelphia region. Chellie Cameron, Airpot CEO | Source: PHL The… Read more.