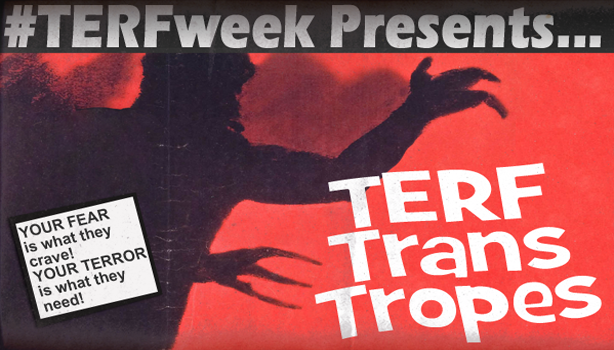 By Cristan Williams
@cristanwilliams TERFs tend to behave much like a fundamentalist echo chamber so that once a new malicious anti-trans trope is created, it is quickly disseminated and replicated until the trans community and/or allied communities must waste their time addressing the fallacies. Therefore, the TransAdvocate has put together this list of debunked anti-trans TERF tropes for your reference.

TERFs assert that Planned Parenthood conspired to helped teach trans people how to force lesbians to have sex with them and this amounts to corrective rape.

TERFs assert that a medical-technical apparatus, in service of the patriarchy, is moving to subsume the female form and this amounts to rape.

Trans Surgery is a Creation of the Patriarchy:

TERFs assert that men, acting in service to the patriarchy, created MTF/FTM trans surgery and, in this way, it is the ultimate rape of the female form.

Cis was created by trans people as a slur:

TERF was created by trans people as a slur:

TERFs assert TERF was created as a slur against lesbians, women, RadFems and/or feminists and as such, represents one of the ways the patriarchy subjugates women.

TERFs assert all trans women should be viewed as a potential risk because a trans woman had, on multiple occasions, stripped nude and paraded her genitals around in front of 6 year old girls.

All trans women should be viewed as a potential risk because a 16 year old trans girl was actually a boy pretending to be trans in order to gain access to the girls restroom in order to sexually harass cis girls.