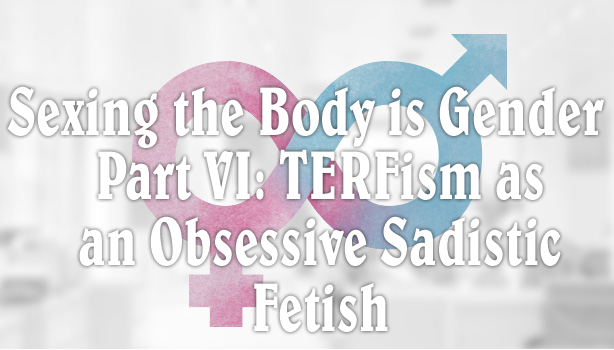 The obsessive nature of TERFs who police the trans communities’ selfhoods through cruelty can be viewed as an obsessive sadistic fetish. The TERF movement – in breathtaking acts of Lateral Violence – repeatedly conflate cruelty with empowerment. When harm is inflicted, they conflate the pain they inspire with a strike against the oppression they face.  While this anti-trans behavior has yielded no measurable result in deconstructing the patriarchy, gender policing provides an immediate payout for the TERF. For as long as they police trans people, TERFs get a turn at being the police rather than the policed. Before I go further, let me be clear about the terms I’m using:

Telling a trans woman that she must reject her own subjective experience of self and instead use only the label system TERFs wish to impose upon her body are the petty actions of a group obsessed with the sadistic release gained through Lateral Violence. TERFs, obsessed with attacking a group in which half the members are victims of rape, try to empower themselves through this imposition. In this way, TERFs are the handmaidens of the very system they claim to oppose. It is the imposition, the assault of a trans person’s selfhood, which provides the TERF with release. In a very real sense, it is a pleasure derived from the resulting perceived pain of another. Moreover, the sadistic pleasure sought by the TERF is always forced and in this way, the name of the power game TERFs play is one of dominance and submission. It is worth noting that this behavior is almost a public display of domination.

Note that in the above image, Brennan is engaging in this abusive behavior publicly. What can be said about the personal need that was apparently satisfied in constructing the above paper person, photographing it and sending the images to trans people? Is this really how one goes about dismantling the patriarchy or, was all of this about something else? Are we expected to believe that the smirking Brennan took no pleasure from this public act or is it reasonable to conclude that this public behavior was enjoyable for Brennan?

Sheila Jeffreys recently published an anti-trans book titled, Gender Hurts. Jeffreys constructs the thesis of her book around pretending that “transgender” is a verb instead of an adjective and refers to trans people as an “ism,” as if trans people were a philosophy or political issue. Jeffreys refers to being trans in the following ways:

In what context might one use homosexual (homosexualing) in the way Jeffreys used transgender (transgendering)?

What are we to make of such public behavior? Surely Jeffreys, who represents herself as an expert on trans issues, understands that transgender isn’t a verb. One can only conclude that Jeffreys, Ph.D. is either grossly intellectually incompetent, or she knew exactly what she was doing and chose to willfully misrepresent her subject to the public. What are we to make of the hours Jeffreys invested in this intellectual turpitude? What need was satisfied through this public display of anti-trans obloquy? In what other way can one honestly view this obsession if not a form of sadism?

Time and again, for the TERF, the need driving their behavior can’t be satisfied privately. For the TERF, their domination of trans people must be carried out in public. Theirs is not a private obsession; a TERF won’t achieve satisfaction by simply avoiding trans people. Instead, they are driven to perform public exhibitions of dominance. The needs that are appeased through public displays of dominance over trans people are not very different than the needs that are appeased by this man who engages in a public dominance display. It is the sadistic thrill of harming another in public, getting away with it and having their abuse publicly validated.

Had all of that energy been directed toward tangible acts of compassion, how might our world be different?

To bring TERF behavior more into focus, I will compare statements from two sources. Both claim expertise in trans issues and it is from that claimed place of expertise, these two sources are willing to make public assertions about the well-being of trans people. First up is the American Psychiatric Association:

Being transgender or gender variant implies no impairment in judgment, stability, reliability, or general social or vocational capabilities; however, these individuals often experience discrimination due to a lack of civil rights protections for their gender identity or expression. Transgender and gender variant persons are frequently harassed and discriminated against when seeking housing or applying to jobs or schools, are often victims of violent hate crimes, and face challenges in marriage, adoption and parenting rights.

Here is the other (self-appointed) expert on trans people, Sheila Jeffreys:

[Transsexual surgery] could be likened to political psychiatry in the Soviet Union. I suggest that transsexualism should best be seen in this light, as directly political, medical abuse of human rights. The mutilation of healthy bodies and the subjection of such bodies to dangerous and life-threatening continuing treatment violates such people’s rights to live with dignity in the body into which they were born, what Janice Raymond refers to as their “native” bodies. It represents an attack on the body to rectify a political condition, “gender” dissatisfaction in a male supremacist society based upon a false and politically constructed notion of gender difference.

The time and energy TERFs pour into hunting, outing and castigating trans people is wasted. It’s simply not useful to anyone else but far right-wing anti-gay groups… Which is why we find Tea Party Republicans quoting TERFs and TERFs quoting right-wing anti-gay propaganda mills.

Now one of the things I find puzzling about it is that, when I look at the House of Lords debate on this legislation, those I agree with most are the radical right. Particularly the person I find that I agree with most, in here, and I’m not sure he will be pleased to find this, is Norman Tebbitt… Tebbitt also says that the savage mutilation of transgenderism, we would say if it was taking place in other cultures apart from the culture of Britain, was a harmful cultural practice, and how come we’re not recognizing that in the British Isles. So he makes all of these arguments from the radical right, which is quite embarrassing to me, but I have to say, so-called progressive and left people are not recognizing the human rights violations of transgenderism or how crazy the legislation is.” – Jeffreys

Being a TERF is not about addressing patriarchy in any meaningful sense; it’s about being selfishly hyper-focused on obtaining a momentary pleasure from painfully dominating another.