I have seen various version of this phrase. “Quit attacking your allies!” – many, many times.  I’ve only been involved heavily in trans activism for about two years.  How and why I’ve become as invested as I am is a long story; but at the end of the day, I am a woman who was assigned female at birth.  I am cis.  So, it’s odd that this statement has been directed at me, but it often has.  It’s also something that I will never say.

The reason that I am pledging never to say, “Quit attacking your allies!” is because it’s not a sincere defense or tactical criticism.  It’s a threat.  The implication is simply: If you criticize me, if you are angry with me, if you say anything that makes me uncomfortable, I will withdraw my support from your cause.  In addition, the majority of the time, this phrase is not used by anyone actually involved in activism.  There is no support to withdraw.  Instead, there is power and privilege that can be put into play.  I’ve come to understand that “Quit attacking your allies!” is often code for: Respect my social status as being above you. Be quiet or there will be consequences.

Who are these “allies” that must not be attacked? Who must be placated? Who are these people being misunderstood or subject to undue scrutiny?

TERFs of course.  According to Caroline Criado-Perez:

[An assumption of bad faith] is a huge issue for this debate, because while either side cannot accept that the other has legitimate, political concerns, that affect their ability to liberate themselves, rather than “phobias” (side-note: I have yet to meet a so-called TERF who denies trans women the right to live as they please) or sheer evil intent, this debate simply cannot happen.

She says this, in the same article where she uses a screen shot of unkind tweets from a non-trans anti-feminist Men’s Rights Activist with a pseudonym referring to “Rustling Jimmies” (a direct reference to active trolling) to help paint her detractors as “hungry wolves” engaging in “Orwellian totalitarianism” who literally cannot be reasoned with.  She also picks out one, much more civil, tweet to disassemble and label as sexist.  She fails to mention any other engagement with her ideas other than dismissing those reactions as involving caps lock.

Nobody is under any obligation to engage with an individual they feel is being uncivil or abusive.  Asserting those boundaries is something that I, and many other women who navigate being a feminist on the internet, am required to do in order to survive here.  What she has done though, is to explicitly state that the incivility of mostly unnamed individuals is the reason she refuses to officially engage with particular ideas.  She says next to nothing beyond proclaiming that she disagrees with all the ruckus.  She objects to being seen as an enemy.

Self-identifying as “an ally” or proudly proclaiming a willingness to allow others to “live”, is such a common tactic that when reading trans-antagonistic articles, finding the but-I’m-not-your-enemy portion of the piece is like playing “Where’s Waldo”.  You don’t see him right away, but you know he’s there.

Here’s the but-I’m-not-your-enemy line within Criado-Perez’s earlier piece where she equates “identifying as a woman” with identifying with sexism:

Now, to return to trans women, I am not for one second denying that they suffer greatly from the same male violence that has made me who I am today. I am also not for one second telling them how to live their lives. I could not care less what another person decides to do with their body, how they choose to express themselves.

Here’s the but-I’m-not-your-enemy line within Sarah Ditum’s piece where she accuses the parent’s of trans kids of pushing transition on them to enforce gender conformity:

I hope that [Laverne Cox] appearance on the front of Time gives heart and hope to people living with sex dysphoria.

Here’s the but-I’m-not-your-enemy line within Julie Burchill’s piece where she demeans trans women as men-in-dresses in incredibly vulgar terms:

Ignore the real enemy – they’re strong and will need real effort and organization to fight. How much easier to lash out at those who are conveniently close to hand!

Here’s the but-I’m-not-your-enemy line in one of many interviews of Cathy Brennan where she defends her active harassment of trans people, including kids:

I make it very clear that if people treat me with respect, I will treat them with respect.

And here is the but-I’m-not-your-enemy phrase in an article by Sheila Jefferies in the same sentence where she stands behind her stance that transition-related surgeries should be outlawed:

The proffered evidence consists of quotes from me arguing that transgender surgery should be considered a human rights violation – hardly evidence of hate speech. 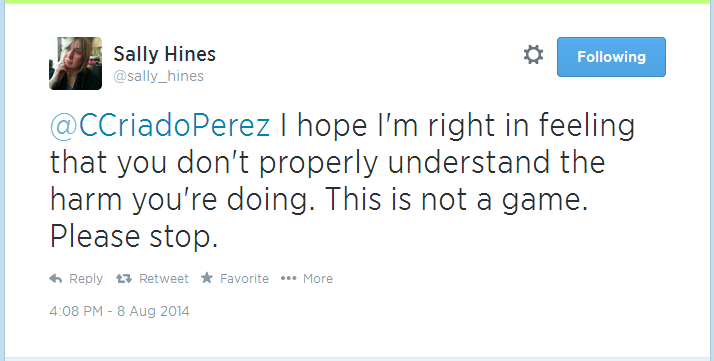 Ironically, I suppose, it was not Criado-Perez who bothered to ask what this harm might be.  Instead, it was the account Stop Blaming Women (who is famous for posting extreme transmisogyny). The question was then answered, with Criado-Perez still tagged, but apparently, that answer was not acknowledged in any capacity by Criado-Perez.  Instead, she dismissed entirely the idea that she was doing harm and instead accused the woman who confronted her (who happens to be the Director of the Centre for Interdisciplinary Gender Studies within School of Sociology and Social Policy at University of Leeds) of being sexist by stating in her recent article, “There are many issues with this tweet. The first is that it is sexist. I am but a mere woman, who, being a trivial creature, cannot possibly “understand” what she is doing.”

Those who target oppressed groups need to include the but-I’m-not-your-enemy statements to deflect the real harm they are causing.  That is part and parcel with being a person in a privileged position.  Privilege involves being able to casually or callously cause harm without barely a notice; and having the social standing to wave-off those who complain as a horde of malcontents.

I don’t talk a lot about why I am as invested in trans activism because of concern for the safety and privacy of those close to me.  I will say this:

These “high profile feminists” don’t see the harm they inspire; moreover, they refuse to see it.  They refuse to consider that they are providing a steady stream of ammunition to those that want my friends dead.

The ones they are complicit harming, on the contrary, cannot simply ignore the struggles in their own lives.  Scolding them by exclaiming, Quit attacking your allies! doesn’t make it all better.  In many ways, it makes it worse.

Why? Because, as Criado-Perez explains plainly, it means that readers will “see nothing wrong with it”:

Many of those people read my last post with interest and could see nothing wrong with it. This was no doubt because, as I made clear, I have no issue with trans women doing whatever they want with their lives and bodies.