The level of maturity shown by San Antonio’s children was apparently far too much to ask from some adults and they demanded the right to gender check individuals in the restroom. In response to their demand to oversee the way in which trans people empty their bladders, a “compromise” was struck:

Nothing herein shall be construed as directing any policy or practice regarding the use of restrooms, shower rooms, or similar facilities which have been designated for use by persons of the opposite sex. – SA Ordinance wording as of 8/28/13 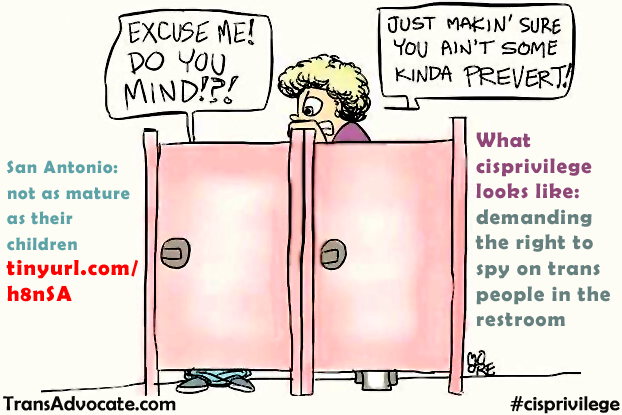 However, GetEqual Texas along with many other social justice advocates continued to advocate for fully inclusive wording until the 12th hour:

“As soon as the draft ordinance with the bathroom exception was included Equality Texas and our coalition partners came out against it. Because of the united front from all of the ordinance’s supporters we were able to have it removed. It was not easy, but our commitment to the inclusion of the trans community in everything we do isn’t dependent on if it’s easy. There was never a question: Equality Texas was going to fight for a fully inclusive ordinance.” – Daniel Williams, past Board member of the Transgender Foundation of America and current Legislative Specialist with GetEqual Texas

Nothing in Division 5 shall be construed as allowing any person to access to any sex-segregated space for any unlawful purpose. – Approved SA Ordinance

… and the revised ordinance with the Saldana amendment was passed around midnight.

Division 5 of the ordinance refers to Places of Public Accommodation (ie, restrooms).

I particularly like this amendment because it strikes at the heart of the fearmongering. It is ALWAYS presented that equality efforts would somehow allow minorities to rape and pillage. The Radical Right used this rhetorical trick against the end of Don’t Ask Don’t Tell, against the Equal Rights Amendment and even against the end of racial segregation:

“Listening to the opponents of the Equal Rights Amendment, you would think it was designed to… integrate public toilets, legalize rape, outlaw heterosexual marriage… Law professor Paul Freund objected in 1973 to being ‘quoted erroneously and out of context by certain opponents of the Equal Rights Amendment’ and commented flatly, ‘I have not staled, and I do not believe, that the Amendment would require the sharing of restroom and prison cells by both sexes.’ Yet in 1975 a huge anti-ERA advertisement in Baton Rouge papers credited him with the allegation that the ERA would integrate bathrooms. ” – Ruston Daily Leader, Thursday, June 16, 1977

“Most concerns we heard about showers and bathrooms were based on stereotype— that gay men and lesbians will behave as predators in these situations, or that permitting homosexual and heterosexual people of the same sex to shower together is tantamount to allowing men and women to shower together.” – Pentagon’s report on ‘Don’t Ask, Don’t Tell’, page 13

“Angry white CIO steelworkers today sought a national union order ending racial segregation on union property… CIO officials several days ago issued instructions to all local unions to do away with separate toilet, fountain and locker room facilities for whites and negroes. Some… told him they would not stand for “Southern traditions being torn down.” – The Tuscaloosa News – May 26, 1950

The Radical Right rolls out this restroom meme against equality measures and they always will. For example, consider the way SA councilmember Chan calculatingly planned on using this very meme against this step towards equality:

Jeff: You get the most political points by standing up for traditional values with this one. It’s not an economic argument. This isn’t a small government argument. This is a social, cultural argument right here and this is how you… And you’re going to score the biggest points by taking that stand…

CW Chan: Maybe what we can do, can we maybe throw some questionable confusions like okay, this transgender… Because this definition is so broad, we don’t want to go into detail, but if you, I look up, I had a… Maybe I say I was not educated on what transgender is about. I look up the, the Wikipedia, whatever, and I’m very surprised how broad the definition can be and it can cause a lot of troubles. What is the, would that, in other words start to have a lot of questions. Would we be discriminating someone if a person go to uhh, uhh, go to a female bathroom?

CW Chan: Because the person that I am…

James: That gets down to, umm, what’s on the driver’s license. In some states, you can get, if you have…

Jeff: In the state of Texas, identifies you with what you were born as.

Jeff: It’s about what you were born as. By the equipment you have at birth…

The Saldana amendment cuts through all the BS and gets to the heart of the hyperbole by rhetorically asking, In what way does gender equality nullify laws prohibiting rape, assault, stalking and/or public indecency/disturbance? Despite the right wing hyperbole, the reality is that this ordinance doesn’t allow trans (or cis) folk to do any of this and it never did. The radical right doing what they do best: trying to trick you into denying your fellow citizens of their 14th amendment rights.

A big thanks to all who did their part in moving Texas a little closer to being a place where all citizens may enjoy their full 14th Amendment rights!

Ashton Lee in a transgender youth who attends California's Manteca High School. Back on June 12th, he testified before the California State Senate Education Committee on the School Success and Opportunity Act (AB 1266). I believe it's important to document…
Read
Previous Post

Cathy Brennan, in one of her blogs titled Name The Problem, has again named me a violent man in her post
Read
Random Post

From Dear 15 year old me - how you can help. If you are a LGBT adult, write a letter to yourself, but write it to the person you were when you were 15 years old. If you could go…
Read
Random Post

I found this picture on TransgenderAsia: It's of Tonette Lopez, a Filipino/Asian transactivist. It's is full of so much strength and resolve it makes me want to stand up and scream HELL YES. Read more about her here. Rest in…
Read
Random Post

My Body, My Choice