Victoria Brownworth, self proclaimed “award winning” TERF journalist (though she calls herself RadFem), hates me. Like, a lot. I wrote the following factual account of how she used her privilege to coerce a trans minor (actions Brownworth herself describes as both creepy and wrong) to expose his genitals to her:

Instead of owning her privilege and/or lapse of professionalism, she went on the offensive:

I recently responded to some TERF hyperbole via this tweet. This post in no way mentioned Brownworth. Nevertheless, my tweet seemed to enrage Brownworth. Instead of responding to any of my points about TERFs, she instead – YET AGAIN – lied: I wonder why this proven liar is allowed to write anything about the trans experience for the Advocate, SheWired, The Real Curve, The Philly Gay News and the Huffington Post? 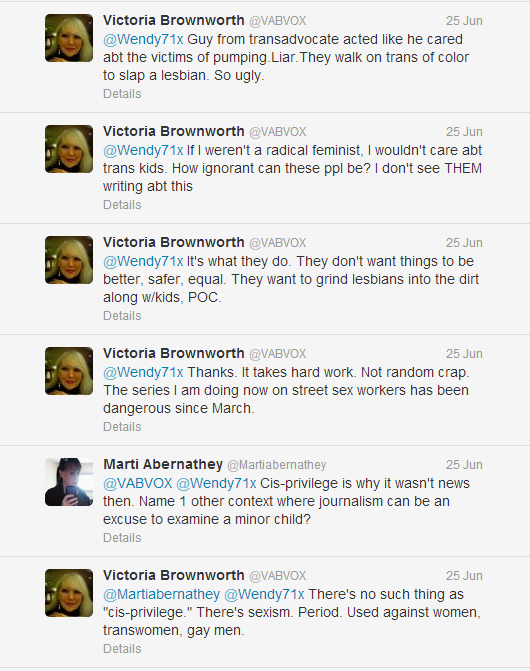 If ever there was an open display of cisprivilege, this is it… Which in Brownworth’s reality, proves that she’s actually a trans ally. BTW, the “guy” from transadvocate? She’s talking about me. I guess misgendering is something trans allies do, amirite?

… all the while refusing to use Chelsea’s name or female pronouns on 8/28/13 (unless forced to by awesome editors on 8/23/13, really… WTF HuffPo?!?) while proudly asserting that trans people are ridiculous when we talk about cisprivilege:

Cisprivilege isn’t real but if it was, it’d be funny as hell!

Is this how a professional journalist behaves? If Brownworth was your employee, how would you feel if she publicly and falsely claimed that YOU were filing suit against someone on her behalf? She’s done this before, just ask her editor, Jen Colletta.

And let’s be honest here. It’s been…

… since I requested that Brownworth produce ANY evidence to substantiate her libelous claims and she’s failed to do so. Here, yet again, this professional “award-winning” journalist is caught in the act of spreading more malicious lies about me. Lying to libel others seems to be a pattern for Brownworth.

Brownworth claims to be an “investigative journalist.” Surely she saved my supposed emails, texts, tweets and/or carrier pigeon notes substantiating her claims against me. One must wonder why in all this time Brownworth has failed to produce any evidence to support her assertions about me. Perhaps that’s because they are, in fact, malicious lies traded on her self-proclaimed status as a trustworthy journalist?

BTW, check out what other feminists think of Brownworth’s behavior:

This excerpt is from a HuffPo Live roundtable discussion on feminism. In the discussion were feminist opinion leaders, including Victoria Brownworth (the voice on the phone line).

Again, I ask the Advocate, SheWired, The Real Curve, The Philly Gay News and the Huffington Post why they pay this individual to be the voice of trans people? If you need a story about the hardships of being a trans POC, why not instead hire any number of trans POC bloggers?  Why do you time and again hire this white, affluent, hubris (IMHO), lying “journalist”? How many times must her obdurate behavior be exposed before you finally figure out that there’s a problem?

In any event, I’m still waiting for Victoria “I despise Cristan Williams” Brownworth to produce ANY evidence to support her cruel and libelous claims against me. It’s just one big ol’ conspiracy against Brownworth isn’t it? This is her reaction to the HuffPo Live feminist roundtable.

Writers for the TransAdvocate work hard to bring you news and commentary. If you found this article meaningful, let the author know that you appreciate the work they do with a tip!
In category:Cristan Williams
Tags:Fact-Checking feminism hate in the media lies radfem TERF transphobia
Next Post

What are the top 3 things you like about being trans?

There is so much hardship, pain, grief and oppression we as trans people face. Sometimes it seems that no matter where we turn, the only image we see representing us (in movies, books, articles, etc.) is the hardship and the…
Read
Previous Post

In the past week or so I've noticed increasing heat (see also: infighting) from the supporters in the GLBT Clinton camp. Tuesday they pointed towards Hillary Clinton's "fully inclusive" ENDA statement as a sign that Hillary is a more GLBT…
Read
Random Post

San Antonio: not as mature as their children

San Antonio adults standing up for their right to discriminate. For the past month, the adults of San Antonio have been wringing their collective hands in very public displays of "concern" over a city ordinance that would extend equality to…
Read
Random Post

I talked about this issue that Thai transpeople face when they are disqualified for military service by labeling them as mentally ill. There has been a lawsuit filed, activism centered on the issue and changes to that policy are being…
Read