Leather. Underwear. Gear. Guys. “A clothes check will be available” | Fair use 🙂

Drag artist Vito John Marzano was denied admittance to the Denver Bear bar the Wrangler because according to the manager his license did not match his gender expression. This was in direct violation of the Colorado Department of regulatory agencies (Dora) Public Accommodations Discrimination policy posted below. 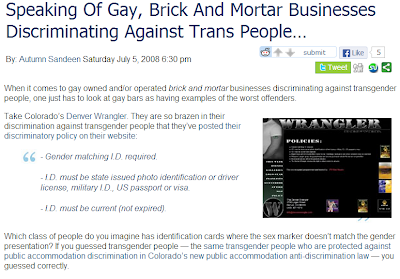 This was not the first time the Wrangler has been called out on transphobia. Autumn Sandeen posted about this bar while while trying to find a trans friendly watering hole for a upcoming visit to Denver on Pams House Blend in 2008.

The Wrangler has since removed that discrimination policy from their website but obviously they still adhere to it in thought word and deed.

Vito John Marzano posted this to the facebook group “Boycott the Denver Wrangler”:

“The Denver Wrangler has a well documented history of discriminating against people whose perceived gender identity on their ID does not match how they present.”

“I did not know this until the night of 8/31, when I went there in Drag after a drag pageant at Hamburger Mary’s. I was denied entry for the above stated policy by General Manager Phil and the Assistant Manager Pat.”

“I pointed out that Colorado has an anti-discrimination law against transphobia, their response is that I am not trans. I asked how would they know the difference and they tried to say the first step for any trans individual is to get a new ID from the state. I then got into a four minute argument with them (all on video) about this discriminatory policy. Their response was very clear: no drag queens, no trans (unless your ID matches your gender identity), and nobody who doesn’t adhere to their myopic view of masculinity. I also want to point out that after this incident, I went into three different bars (two of which are straight) with my ID and asked the bartender if they would serve me. They were shocked I was even asking and more shocked that a gay bar on Denver would do this. Then women started telling me how they are discriminated and treated horribly by the Denver Wrangler when they have gone with their friends.”

“This entire policy is bullshit. Not only is drag an integral part of LGBT culture, our trans- and genderqueer kin should not be denied entry into an established whose primary function is to take money from the LGBT community. I am also going to point out that that Denver Wrangler has been previously challenged. Their “policy” was taken off their website. It may not be on their website but it is still going strong and it is enforced by the bar staff.”

“The LGBT community needs to come together and fight any form of discrimination, even if it comes from our own community. Boycott the Denver Wrangler until they treat all of their patrons equally.”

Hilary Molina Mendiola died September 23rd at 7:30pm after being thrown naked from the Southern Juan Escutia Axis 2 in the Cuauhtemoc borough of Mexico city. Ms. Mendiola had bruises on her face according to Noticias Terra.com. showing signs of a struggle.…
Read
Previous Post

Is Singer Neko Case Transgender? Maybe Not But She Is The Man

"I'm a man, that's what you raised me to be / I'm not your identity crisis, this was planned," she sings. "If I'm dipshit drunk on pink perfume* then I am the man in the fucking moon, because you didn't…
Read
Random Post

As #LeelahAlcorn's mom talks to CNN, Leelah's Reddit posts come back to haunt her

While her mom talks to CNN to profess her love and support, Leelah's Reddit posts paint a homelife defined by bullying and fear. Much has been written about Leelah Alcorn's suicide note* which identifies conversion therapy and unsupportive parents as…
Read
Random Post

Gay Media: Maryland Trans Community, Love The Crumbs We Give You

As much as trans people seem to want to believe it, gay (GayINC) media is not their friend/advocate/ally. Tom Lang, of Know Thy Neighbor said: It seems that the hard work of transgender and transsexual activists inside and outside of…
Read
Random Post

by Caillean McMahon Pennsylvania Gay and Lesbian Alliance. The City of Los Angeles has just renamed a street intersection after an outspoken opponent of gay marriage and gay rights. In mutliple state legislatures, St Paul and Leviticus are being cited…
Read
Random Post

Multiple news outlets have reported on the recent torture, murder, and mutilation of a mid-western trans rapper. The rapper, Evon Young went missing January 2. The official story is that 5 men were arrested for torturing, mutilating, murdering, immolating and then throwing Evon…
Read