What you are about to read is a CENSORED version of the original post. This TERF has been attempting to censor all online content which exposes her as the troll who was targeting a suicidal trans woman. Being privileged, this TERF has an attorney working to censor any online evidence the trans community posts which document the facts.

HERE is the content from Cristan Williams’ site that was censored. Here is the post that was originally on this page. HERE is the proof that this person acted to have this page censored.

Transgender and gender variant persons are frequently harassed and discriminated against when seeking housing or applying to jobs or schools, are often victims of violent hate crimes, and face challenges in marriage, adoption and parenting rights.

The National Institute of Health defines Social Anxiety Disorder as being characterized by a, “… persistent, intense, and chronic fear of being watched and judged by others and feeling embarrassed or humiliated by their actions. This fear may be so severe that it interferes with work, school, and other activities and may negatively affect the person’s ability to form relationships.”

TERFs and the Social Context: The History

Trans Exclusionary Radical Feminism (TERF) is a branch of “feminism” that acts to destroy the patriarchy by destroying the reality of trans women. The TERF movement attempted to do exactly this advocating for a national program of forced repetitive therapy, legislating trans people out of existence and successfully having access to trans medical and psychological care effectively banned in the United States.[1, 2] The historical TERF movement was as unrelenting as it was cruel. Whether by intention or design, TERFs have been exceedingly skilled in leveraging the above social context.

After the members of the Street Transvestite Action Revolutionaries (STAR) and the Queens Liberation Front (QLF) started the Stonewall Riot and funded the post-stonewall legal fight, TERFs began a campaign to politicize the fact that trans people could use the correct restrooms at New York City Hall[3]. Unsurprisingly, trans people were stripped of the equality protections their money and attorneys had been fighting for since Stonewall. During the 1973 Christopher Street Liberation Day post-parade rally, trans people were excluded from participation due to TERF objections. Over TERF objections, a member of the STAR took to the stage and implored the gathered to think of themselves as one community and that we should actually care for our homeless, abused and wrongfully jailed. A TERF took the stage immediately afterward to assert that transwomen were men and should know their place. The STAR member went home and in despair, attempted suicide. The name of that STAR member was Sylvia Revara.

Cathy Brennan is seen by many as a particularly hateful public face of the modern TERF movement. She’s attempted to intervene in the medical care of trans people and has a history of ‘harassing’ the families of trans people, outing a trans kid to their school, working with an ex-gay group in targeting another trans kid and outing trans people to their employers.

More about TERFs can be found here [Strong Trigger Warning].

On October 1, 2013, my university employer asked me, “Remember when you warned me that Cathy Brennan may contact your employer due to a magazine article I was interviewed in? Well, she just contacted us.” Fortunately, I had warned him about Brennan just the week before that this might happen because I was interviewed by Bitch Magazine and thought that she might retaliate by attempting to silence me or get me fired.

I logged into my campus work computer from home and opened the email Brennan sent. I received a direct copy of it as I am on the abuse/security alias due to working in the Office of Information Security. I am sure Brennan didn’t realize that. I read the email and began shaking. It was full of libelous remarks about me. It hadn’t even sunk in yet that my coworkers also received this as well as our campus police department and the registrar’s office (really? the registrar?).

Disclaimer, there is no need to redact her contact information as she posts this all over the Internet.

I was in shock after reading this. The more this soaked in the more of a panicky feeling I got. I told my boss I couldn’t come to work that day. Among other libelous claims, included was an outrageous lie that I had harassed her about rape.

I went to work the next day and when I walked into my suite it hit me that my coworkers saw these lies and I wondered if they believed in them. I suddenly had a full-blown panic attack. I wondered if I was about to lose a long-term job that I absolutely adored. I wondered if my employer might buy into this monster narrative[4, 5, 6] our culture so enjoys. I felt violated; I can’t express to you the level of gut-wrenching anxiety her lies inspired. The panic seemed to go on and on without end. Wave after wave of anxiety crashed through me. It was as if she had reached out and desecrated what had once been a source of safety and pride.

And that was only the beginning of a coordinated attempt to engineer the ruination of both my reputation and my carrier. In the middle of an extended panic attack, none other than Janice Raymond – the very TERF that engineered the death of trans healthcare in America – contacted my employer, supporting Brennan’s narrative. On top of that, another of Brennan’s supporters – an infamous internet troll – contacted my employer as well. At this point, the panic was omnipresent, eclipsing all else. I could no longer function and was forced to take medical leave.  Later in October, I was diagnosed with acute Post Traumatic Stress Disorder.

I am trying my best to learn how to cope with this debilitating condition and am currently on medical leave from work. I never know when an episode is going to hit me. Sometimes there are identifiable triggers and sometimes it just happens out of the blue. In each case I feel good one minute then just seconds later the PTSD is so horrific that it is unbearable. I’m trying to learn how to manage it, especially when the PTSD is particularly bad. I found that reaching out can sometimes help. Also, if it gets to be unbearable, I attempt to seek help.

In February I checked myself into the emergency room because the trauma was totally overwhelming. At the moment, I saw no relief in sight and at the time, death almost seemed preferable to the hell I was experiencing. I tweeted about what was going on and I also reached out to a few folks on FaceBook to let them know what was going on.

When next I visited my doctor, he attempted to hold under observation for a few days because he said he had been informed that I was planning a suicide attempt.  I asked if the person who contacted him was Cathy Brennan. He said it was. On top of everything Brennan, had almost managed to have me held against my will for days in a psych ward because I was suffering from PTSD her behavior caused.

Worse, an anonymous tipster contacted my job’s security team, the campus police. The campus police then took the issue to my boss’s boss. The information supplied to campus police was similar to the tip supplied to my doctor and it is my belief that the anonymous tipster was none other than Cathy Brennan. If that is true, Brennan has managed to involve my co-workers, my boss, my boss’s boss, my employer’s security team, the university registrar’s office and my doctor in her harassment of me. It should be noted that prior to all of this I had asked her to leave me alone and to cease any and all contact with me.

Recently, TERFs have been gloating over my PTSD: 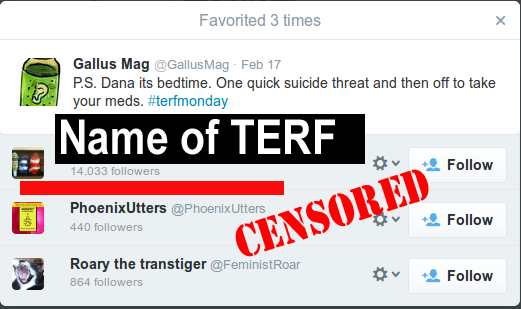 This is an image capture of a comment made by @gallusmag that shows those who favored her tweet. Note that TERF NAME CENSORED, a writer for the Huffington Post and author of a transmisogynistic article on Counter Punch liked the tweet.

While I don’t recall ever claiming that I was planning on killing myself, according to TERF NAME CENSORED I had taken to Twitter to dramatize the various ways I was going to off myself because I was playing some sort of abusive political game. 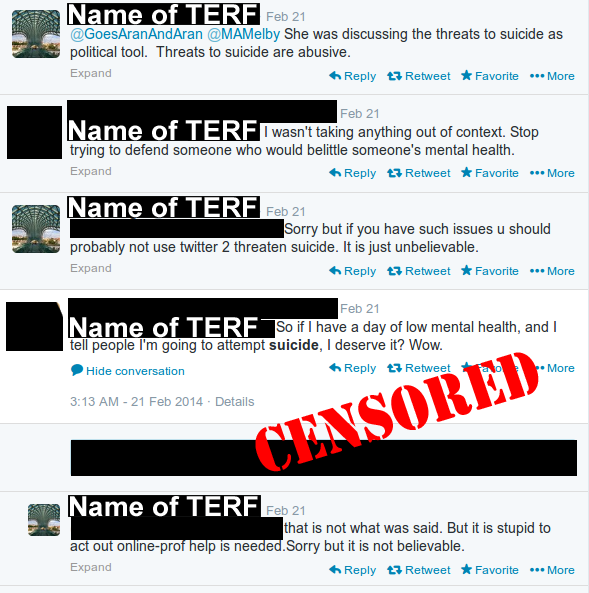 Then, of course, TERFs began the mocking and gaslighting dog-pile:

Writing this article has been a somewhat triggering ordeal for me but it had to be done. I was told that my treatment for PTSD will be Cognitive Behavioral Therapy which means being exposed to what caused my trauma over and over again. For me, this article was therapeutic in that I’m not only recounting what happened, I’m also reaching out to those who may have suffered some similar abuse from the TERF movement.

I can see now that asking Cathy Brennan to just leave me alone doesn’t work. With the support of my friends and therapist, I am pursuing legal means to ensure that she leaves me alone. At times I’m overcome with the sheer hate that the TERF movement embraces. More often than not, these moments are followed by crippling PTSD.

However, I know that I’m not the only person who’s faced this level of enmity. If you’ve suffered because of similar attacks, I’d love to hear from you. I want you to know that you’re not alone and I also want you to know that it’s possible to fight back in a way that will stop the abuse. In the coming months, I will post updates on the progress I’ve had and share any successes I have in stopping the abuse.

[1] Stryker, Susan Transgender History. Seal Press, 2008
[2] Raymond, Janice G., The Transsexual Empire. Reprinted 1993: The Women’s Press, 1978
[3] Cohen, Stephan The Gay Liberation Youth Movement in New York: ‘An Army of Lovers Cannot Fail’. Routledge, 2007
[4] See #17 of the You Might be a TERF if… list.
[5] See pages 12 – 17 of the Trans Media Watch’s initial submission to the Leveson Inquiry for an overview of the monstering of trans people.
[6} See also the following commentary: Scary Trans Monsters, LGBT Weekly, My Words to Victor Frankenstein Above the Village of Chamounix: Performing Transgender Rage by Susan Stryker and Trans Activism Of The Monstrous, PHB.