Studies show that the trans population lives under extreme psychological pressures unseen in even active military personnel. Fifty-five percent of trans people  [1,2] were found to live with social anxiety. Within the general American population, similar types of anxiety are experienced by only 6.8% [3] of the population while these levels of anxiety were found to exist at a rate of 8.2% among military personal. [4]

This graph compares the social anxiety transgender people feel against levels of social anxiety within the general American population and that experienced by military personnel.

Transgender and gender variant persons are frequently harassed and discriminated against when seeking housing or applying to jobs or schools, are often victims of violent hate crimes, and face challenges in marriage, adoption and parenting rights.

The National Institute of Health defines Social Anxiety Disorder as being characterized by a, “… persistent, intense, and chronic fear of being watched and judged by others and feeling embarrassed or humiliated by their actions. This fear may be so severe that it interferes with work, school, and other activities and may negatively affect the person’s ability to form relationships.”

I have spent so many hours avoiding public multi-stall bathrooms  that I have damaged my bladder and put pressure on my kidneys. The problem was a daily one. I’d think about where I was going what bathrooms I’d have access to, how much I drank during the day, whether I’d be with people who could help stand guard…

We live under the constant threat of horrifying violence. We have  to worry about what bathroom to use when our bladders are aching.  We are forced to consider whether we’ll be dragged out of a bathroom and arrested or face a fist fight while our bladders are still aching .  It’s an everyday reality for us. Human beings must use toilets… If I go into the women’s bathroom, am I prepared for the shouting and shaming? Will someone call security or the cops? If I use the men’s room, am I willing to fight my way out? Am I really ready for the violence that could ensue?

Police officers often harass or abuse transgender and gender nonconforming people regardless of which sex-segregated bathroom they use. This harassment intensifies when coupled with the stereotyping of trans people as sexual predators. As such, the use of the  ‘wrong’ bathroom . . . often results in arrests for crimes such as public lewdness, public obscenity, or public indecency. Refusing to  comply with or simply questioning a police officer’s direction as to  which bathroom the individual must use can often lead to charges  such as resisting arrest or disorderly conduct.

[Non-discrimination protections based upon gender identity] would allow all males – including registered sex offenders or males subject to a domestic violence order of protection – to assert “gender identity” as a means to invade female-only space. Indeed, these laws provide a legal basis for males to be in sex-segrigated space. It is well-documented that males as a class have a demonstrated history of harming females as a class by exploiting bemale biology (ie, rape, sexual violance, unwanted pregnancy).

… their arrogance and oppressiveness is amazing. It is funny though that they are so used to Feminists immediately bowing before them that they don’t know how to deal with that we don’t care what happens to them. They expect we’ll be shocked to see statistics about them being killed, and don’t realize, some of us wish they would ALL be dead. 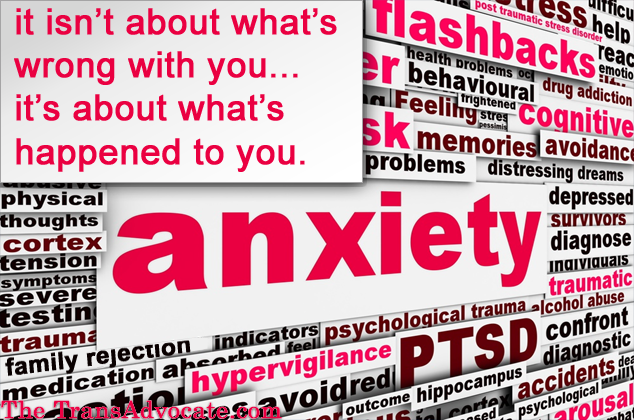 [alert type=”info”]Editor’s Note: Read more about the rate of social anxiety/PTSD in military personnel here. Rates cited here were between 8% and 43%, depending upon the type of combat the soldier survived. Even the high-bound level of 43% seems to be dwarfed by levels found in trans studies.[/alert]
Cristan Williams
Cristan Williams is a trans historian and pioneer in addressing the practical needs of underserved communities. She started the first trans homeless shelter in Texas and co-founded the first federally funded housing-first homeless program, pioneered affordable health care for trans people in the Houston area, won the right for trans people to change their gender on Texas ID prior to surgery, started numerous trans social service programs and founded the Transgender Center as well as the Transgender Archives. She has published short stories, academic chapters and papers, and numerous articles for both print and digital magazines. She received numerous awards for her advocacy and has presented at universities throughout the nation, served on several governmental committees and CBO boards, is the Editor of the TransAdvocate, and is a founding board member of the Transgender Foundation of America and the Bee Busy Wellness Center.