Editor’s Note: This is part of a TransAdvocate series on religion. This series seeks to explore how various religions conceptualize trans and how trans people conceptualize religion.

There is an ex-trans temple in Thailand that is trying to chant, meditate and bully the trans out of trans people. Wat Kreung Tai has a special program for male-bodied trans people between the ages of 11 and 18.

The Kreung in Wat (Wat = monastery in Thai) Kreung Tai has a certain connotation that’s is significant in their reparative detransing effort. Kreung is a term that is generally used to refer to people of mixed racial background and specifically Thais of Western Caucasian and Thai ancestry. The term is sometimes used as a slur and those who are kreung have a history of enduring discrimination due to a lack of what is thought to be racial purity. They were often stereotyped as being the product of a Thai prostitute and her western John. If you don’t compare this concept of kreung to the experience of the kathoey (Thai MTF trans people), there is a cultural nuance can be missed. The term carries connotations of otherness; of being half, of the world of prostitution and of not being like other Thais. Pipop Thanajindawong (seated, eyes closed) is a kathoey who is having her head shaved as all sramaneras (novice monks) and bhikhus (fully ordained monks) do.

Pitsanu Witcharato, the camp’s overseer,  set up the reparative operation in 2008 when he became offended by the number of kathoeys who were becoming novice monks.

Sometimes we give them money to buy snacks but he saved it up to buy mascara.

He then goes on to opine:

Were you born as a man or a woman or can you not specify your gender – not man or woman? You cannot be anything else but your true gender, which is a man. As a novice, you can only be a man. We cannot change all of them but what we can do is to control their behavior to make them understand that they were born as a man… and cannot act like a woman.

Lest you think Witcharato is acting in good faith to actual Buddhist doctrine, consider the following from another monk of the same school of Buddhism (Theravada):

These episodes indicate the Buddha’s open-mindedness toward transsexual persons. He accepted their bodily changes even though some in his society attributed such changes to the influence of bad Karmas. Some of the sections in the Vinaya Pitaka are obviously later additions, which do not represent the Buddha’s true voice. There is every reason to believe that the Buddha accepted all kinds of people irrespective of any differences they had undergone.

The Buddha’s statement that one becomes a noble person not by birth but by one’s behavior confirms this conclusion. “Birth” means wealth, social status, and physical appearance including the gender of a particular person. Change of a certain person’s gender has no connection to the evaluation of that person. Only wholesome behavior—wholesome words, actions, and thoughts—makes a person noble.

In fact, in Buddhist texts, there are several types of transgender people that are noted:

While the above terms are sometimes used in conjunction with descriptions of sexual activity, it seems that over 2500 years, Buddhists understood that there was a difference between sexuality, physical sex, social gender identity and gender orientation.

However, this monk-run re-gendering camp isn’t an isolated incident in homo/transphobic monks using their own interpretation of Buddhism to target the queer community. Phra Pisarn Thammapatee (AKA Phra Payom Kalayano), one of the most eminent monks in Thailand, demanded in 2003 that 1,000 gay/trans monks be stripped of their ordination.

Pipop Thanajindawong in the Buddhist re-education camp for trans people

Pipop doesn’t hold out a lot of hope for the Buddhist version of reparative therapy. Before going to the camp, she lived as a woman until her family encouraged her to give this re-education camp a try. Speaking about her family and her return to Bangkok, Pipo said:

I can make them proud even I’m not a man. Once I leave the monkhood the first thing I want to do is to shout, to scream out loud saying: ‘I can go back to being the same again!

After leaving the camp, Pipo wants to work at a bank and save enough money to get gender-confirming surgery.

AUTHOR’S NOTE: I wrote this article after hearing someone make a blanket assertion that my religion,  Theravada Buddhism, is supportive of trans folk whereas other religions are not.  Over the last decade, I’ve met a number of queer Buddhist monastics and opinion leaders. 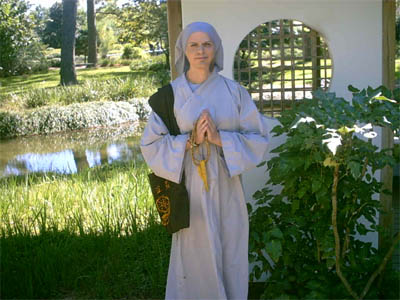 There was, of course, the out transman, Michael Dillon who ordained as a monk in the Tibetan tradition and took the name, Lobzang Jivaka in 1960. 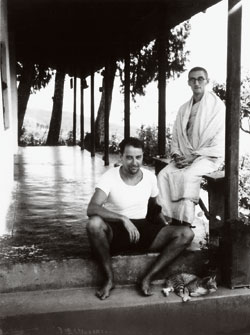 I’ve been invited to speak at Buddhist events: 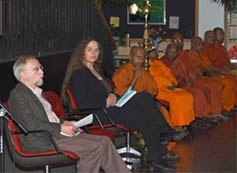 Let’s be clear, even the Buddhist monastic writings deal directly with transition:

‘Now at one time, the sign of a woman appeared to a monk. The other monks told this matter to the Buddha. He said: “Monks, I allow the teacher to meet with nuns during the rains, as for the higher ordination, so as in the presence of the nuns away from those offences which they have in common with monks; but in those offences of monks which are offences not in common with nuns, there is no offence for the nuns.’

‘Now at one time, the sign of a man appeared to a nun. The other monks told this matter to the Buddha. He said: “Monks, I allow a teacher to meet with the monks during the rains, as for the higher ordination, so as in the presence of monks to turn the monks away from those offences which they have in common with nuns; but in those offences of nuns which are offences not in common with monks, there is no offence for the monks.’ (Vinaya Pitaka III 35, page 53 )

Buddhism recognizes the reality of trans people and voices clear support for transition. However, bigots will happily turn their religion into a tool of oppression and Buddhism is not exempt from having its share of religious bigots.