The Handmaid’s Tale isn’t as Fictional as you Thought

For most Americans, The Handmaid’s Tale by Margaret Atwood is a novel about a dystopian future where women are chattel whose only purpose is to procreate. For a surprising number of American women in positions of cultural, legal, and legislative power, it is an instruction manual on how to remake America in the image of Gilead.

They want a future where not only is abortion illegal under all circumstances, so are all forms of birth control for women other than the rhythm method.  They pine for a Godly America where homosexual acts are a felony and where  LGBT leaders and abortion providers are arrested and put to death. Punishments, including flogging, are meted out in public. Attendance of (Christian) religious services would be mandatory. Supportive parents of LGBT youth would lose custody of their children and be prosecuted for child abuse.

It would be easy to dismiss these statements as nothing more than fringe elements. Except they’re not. They come from, respectively, one of the most popular Christian bloggers on FB, her husband, female elected officials in a State House, and top women at the Family Research Council (FRC).  The FRC is multi-million dollar anti-LGBT hate group with an expensive office on G Street in downtown Washington DC and was well represented on the Trump Administration Transition Team.

Many of these views are also pushed by mainstream Conservative media outlets, and the authors are frequently women. The Federalist is perhaps the best normalizer of the radical opinions of women who want a world like the one described above. Its founder and publisher, Ben Domenech, appears on CBS’ “Face the Nation” most Sundays. The Federalist goes to some lengths to feature women writers whose positions on abortion, birth control, transgender people, Islam, and religion are in line with Gilead’s and the individuals cited above. One essay  asserted that women who choose not to have children are both selfish and have a “mental disorder.” Frequently the online publication steps right up to the line of suggesting that various groups (transgender people, abortion providers) should be eliminated, but don’t actually say it or how it would be done.

In social media, perhaps no one better exemplifies The Real Housewives of Gilead more than “The Activist Mommy” (aka Grace Elizabeth Johnston). She has an FB page with 150,000 followers and a popular YouTube channel. She is married to Dr. Patrick Johnston (more on him later) and has 10 home-schooled children. She is best known for video diatribes against transgender people, Muslims, the women’s marches, feminists, acceptance of gay people, abortion, and birth control.

She regularly pickets Planned Parent Clinics and posts pictures of gay people along with the caption “Leviticus 18:22” (which got her a temporary ban from FB and made her into an instant online martyr for Christianity, of course). She advocates “using your womb as a weapon” for God. She also goes to Pride Parades in Columbus, Ohio to tell queer people they’re abominations worthy of death unless they become Christians exactly like her. 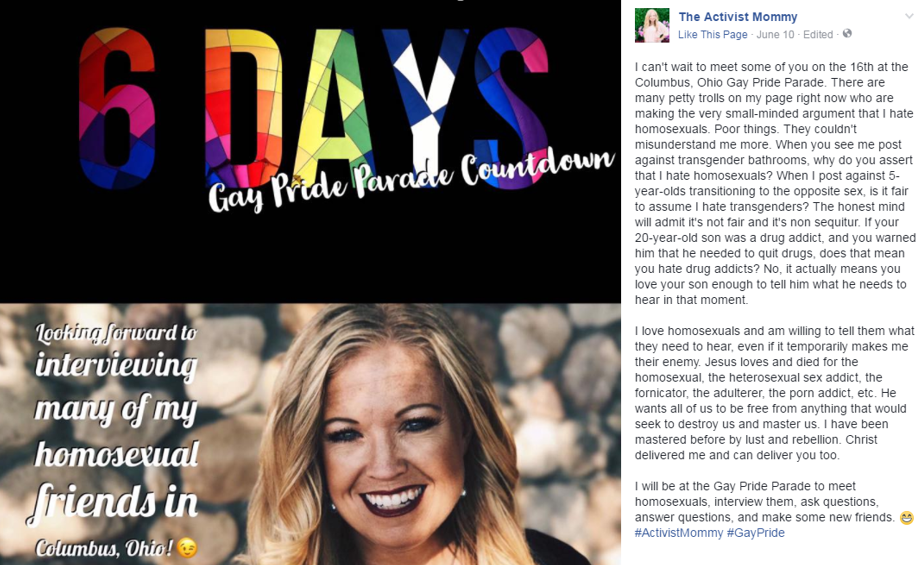 Because she loves them, of course. 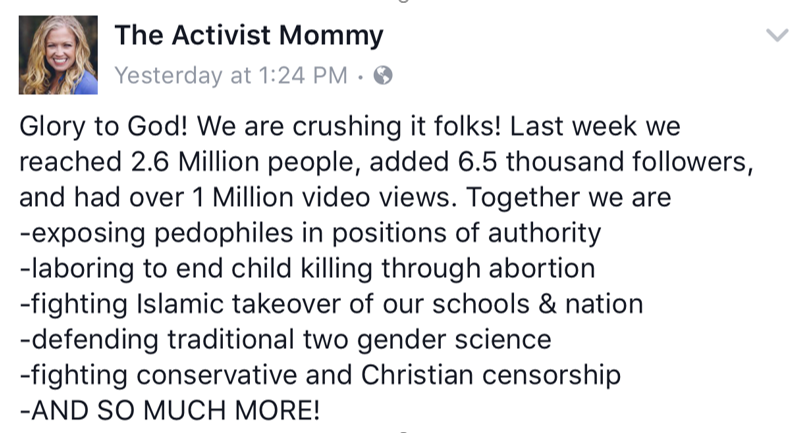 Her husband is even more radical. He opposed all abortions and is leading a crusade to convince people to try and carry ectopic pregnancies (the #1 cause of maternal mortality in the developing world) to term based on an anecdote in a journal article from 1994, which was later proved to be completely falsified.  He recommends executing everyone on death row immediately and making homosexuality, immigration violations, and providing abortions (or aiding those who do) a capital crime. The sentence under a Patrick Johnston administration would be carried out immediately via Biblical methods like stoning or crucifixion. Other lesser crimes, like breastfeeding in public, would be punishable with public flogging.

He’s also a doctor who opposes most vaccinations, (including polio, MMR, and pertussis), and recommends prayer as the preferred treatment for depression. He also suggests that people are mentally ill if they don’t want to own guns and that people are fat because they are sinful. He states that “if you do not spank your kids you do not love them.” Dr. Johnston has also published racist articles stating that “the greatest threat to the African American community is the sin of African Americans.”

It would be easy to dismiss him, but he ran a credible campaign for District 94 of the Ohio State House in 2008. and his novel is being turned into a movie starring Kevin Sorbo.  He wrote another dystopian novel which envisioned how a glorious new Gilead would arise in a clash of cultures, “where the superiority of the principles of Christianity prevail over a plethora of vicious opponents.”

Like the Duggars, the Johnstons are apparently part of the Quiverfull movement, which emphasizes submission to your husband in all things, including sex. Thus, the Johnstons do not believe consent is necessary between spouses, especially when the husband wants sex. Marital advice obtained from their “family” blog states, “…don’t you want your wife to have sex with you even if she doesn’t feel like it? Well do unto others what you would have them do unto you.  We have to do things we don’t feel like doing all the time.”

It’s not hard to imagine these spouses “preparing” themselves like Offred did for The Commander. 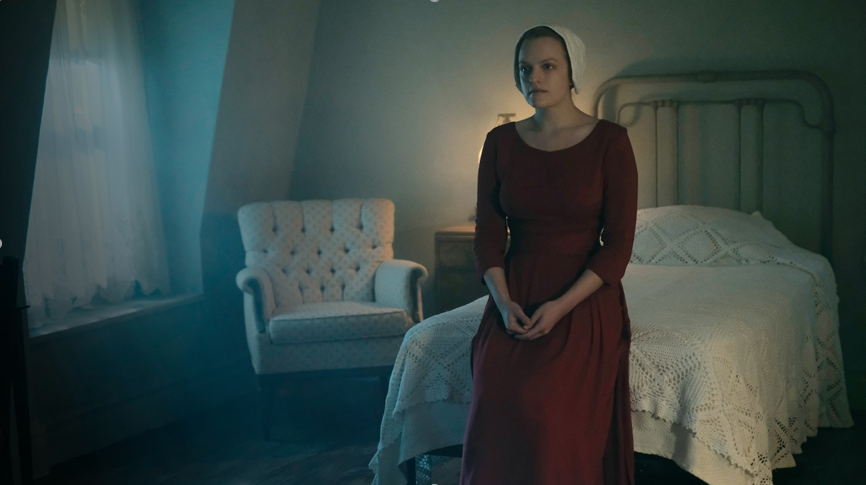 The Quiverfull movement, which is linked with the Southern Baptist Convention, also encourages husbands to use violence to “chastise” their wives and children when they are disobedient. Bruce Ware, president of the Evangelical Theological Society, told a Texas audience that domestic violence stems from women’s lack of submission.  Women are also forbidden from working outside the home, which Albert Mohler, president of the Southern Baptist Theological Seminary had to tap dance when discussing his support for Sarah Palin to a Quiverfull crowd.

The effects of living in such an environment are described in chilling detail by those who escaped. The entire premise of submission, violence, and isolation creates a dysfunctional relationship dynamic which frequently results in sexual, mental, emotional and spiritual abuse. The lack of accountability for men when committing even the most heinous forms of abuse was made evident when it was revealed Josh Duggar (who was working for the Family Research Council at the time) had raped four of his younger sisters and one other girl.

He was never prosecuted for these crimes after a family friend (and also part of the Quiverfull movement) in the police department gave him a “stern talk.”

This brings us back full circle. There are plenty of women working towards bringing about their own brand of Gilead. “The Activist Mommy” and her husband are perhaps the best examples. They have millions of views on YouTube, and hundreds of thousands of followers.  Their views and the policies they are pushing for are now deep within the conservative mainstream. Conservative mass-media outlets like The Federalist support their political positions.

So does the Family Research Council, which included prominent staffers who were a part of the Quiverfull movement, and numerous high-ranking members of the FRC on the Trump transition team, including Ken Blackwell, Kay Cole James, Ken Klukowski, and Ed Meese. Vice President Mike Pence has had the full-throated support of the FRC for his efforts to ban abortion, birth control, and laws protecting LGBT people in Indiana and the US House of Representatives.

Additionally, Tony Perkins, President of the FRC, wrote the draconian social platform of the Republican National Committee’s policy at the 2016 convention, which includes a demand that lawmakers use religion as a guide when legislating, teaching the Bible in schools, banning transgender people from bathrooms, declaring pornography a public health crisis, a constitutional ban on same-sex marriage, and a personhood amendment effectively banning all abortion and almost all birth control.

In short, the radical views of the Johnstons are popular with a staggering number of people, and well represented in conservative media, the Republican Platform, Congress and the Trump Administration.  They are working towards a world where being gay is illegal and transgender people are gone. They desire a country where women with an ectopic pregnancy face a choice of an excruciating death or fleeing to another country and never being able to return to the United States because they would face charges for murder.  They want a country where women cannot work outside the home, husbands can strike their wives and children, and where women cannot refuse sex within marriage or even decide whether or not to have children. They long for a country where fundamentalist Christianity is the official state religion, and complications during pregnancy are likely to be fatal.

One cannot help but think Patrick and Elizabeth Johnston would be more than happy to fill the roles of Commander Waterford and Serena Joy.

But that’s not the scary part. There were always ambitious and ruthless religious zealots like this, regardless of the religion or culture.

The scariest part is how clearly we can see Gilead from here.