Back in 2011, Cathy Brennan and I were among a group of people working to pass Maryland’s HB 235 (Prohibiting Sexual Orientation and Gender Identity Discrimination) into law. I developed what I thought was a friendship with her while working on the bill — this was the e-mail she sent me that changed the tone of our relationship. 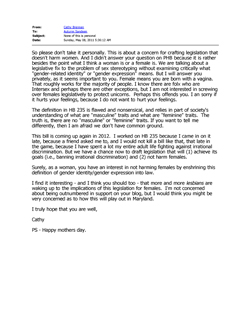 I asked her in a comment thread on Pam’s House Blend, the blog I then contributed to, whether or not she considered trans women to be female (and I can’t find that comment thread now), and she responded in an email dated May 8, 2011. It was in that email that she first spelled out that she didn’t consider me, and as we later have seen in the multiple times she publicly stated her point of view regarding trans women, to be female.

Even after stating that she didn’t consider me female in that email, she stated she didn’t want to hurt my feelings – perhaps a sweet sentiment. And add to that, at the end of that email she wished me “Happy Mother’s Day.” She knew I have three children, and given that context, I believe she was wishing me, as a parent (and not a child of my own mother), a Happy Mother’s Day.

Her letter is a long way from where she later called me a violent man — in the same month as Mother’s Day — in 2013. 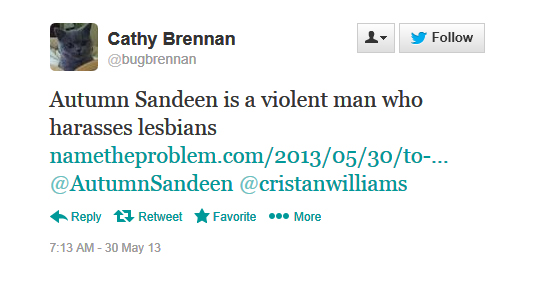 The following is the text of that e-letter:

So please don’t take it personally. This is about a concern for crafting legislation that doesn’t harm women. And I didn’t answer your question on PHB because it is rather beside the point what I think a woman is or a female is. We are talking about a legislative fix to the problem of sex stereotyping without examining critically what “gender-related identity” or “gender expression” means. But I will answer you privately, as it seems important to you. Female means you are born with a vagina. That roughly works for the majority of people. I know there are folx who are Intersex and perhaps there are other exceptions, but I am not interested in screwing over females legislatively to protect unicorns. Perhaps this offends you. I am sorry if it hurts your feelings, because I do not want to hurt your feelings.

This bill is coming up again in 2012. I worked on HB 235 because I came in on it late, because a friend asked me to, and I would not kill a bill like that, that late in the game, because I have spent a lot my entire adult life fighting against irrational discrimination. But we have a chance now to draft legislation that will (1) achieve its goals (i.e., banning irrational discrimination) and (2) not harm females. Surely, as a woman, you have an interest in not harming females by enshrining this definition of gender identity/gender expression into law.

I find it interesting – and I think you should too – that more and more lesbians are waking up to the implications of this legislation for females. I’m not concerned about being outnumbered in support on your blog, but I would think you might be very concerned as to how this will play out in Maryland.

I truly hope that you are well,

Just as Cathy Brennan sincerely wished me a Happy Mother’s Day back in 2011, I wish her one as well here in 2014.