The day after the Maryland House of Delegates passed legislation making discrimination against transgender people illegal, one group has decided to take action against it.

The bill, SB 212 “Fairness for All Marylanders Act of 2014” amends the state’s law to include gender identity in the workplace, housing, and public accommodations.

The Baltimore Sun is reporting that the conservative group MD Petitions emailed supporters telling them:

“The good news is that we don’t have to accept this bill as law – there is another way to defeat this terrible bill,”

“The group invented an online process in 2011 for collecting signatures, which allowed them to petition a law to referendum for the first time in two decades. By the 2012 election, MdPetitions.org successfully put three laws onto the ballot: same-sex marriage, the congressional redistricting map, and in-state tuition for certain undocumented immigrants. Voters upheld all three.”

The major player in the bill’s passage,  Maryland TransEquality issued this statement by Carrie Evans, Executive Director of Equality Maryland:

“This is the culmination of a very long and sustained effort by Equality Maryland to ensure transgender Marylanders are included in our state’s anti-discrimination laws. Today’s win is the result of so many people and organizations – transgender individuals and their families showing up and telling their stories year after year, elected officials like Senator Rich Madaleno and Delegates Luke Clippinger, Bonnie Cullison and Joseline Peña-Melynk , many years of dedicated and committed Equality Maryland Board and staff, amazing coalition partners like the Human Rights Campaign and so many more people and organizations that we will highlight in the coming months.”

SB 212 now heads to Governor O’Malley’s desk, who stated at MCTE’s Lobby Day last month, “I am waiting to sign it.”

But not everyone is thrilled about the bill’s passage. Maryland House Minority Whip Kathy Szeliga told Delmarva now

“We need to know whose safety comes first. We should be very concerned about the safety of women and little girls, because what this allows without striking accommodations are possible predators and pedophiles from going in our women’s restrooms,” said Szeliga R-7-Baltimore County. “I think the rights of women and little girls safety should come before that of anyone else.”

Promoting fear of transgender people using children as a weapon is a time-honored tradition of hate mongers and bigots but one that has no basis in reality. The truth. 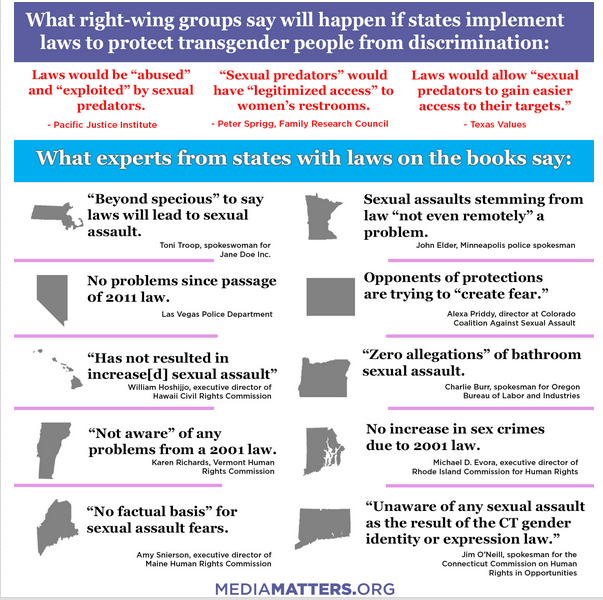