TERFs are well-known for referring to their rhetoric as being “gender critical.” You might think that this means that they are critical of gender in all its forms. However, TERF criticism of gender seems to only ever extend to others (usually trans people).

There is a great line in SLC Punk that gets at the heart of a critique I recently made:

Brandy: Wouldn’t it be more of an act of rebellion if you didn’t spend so much time buying blue hair dye and going out to get punky clothes? It seems so petty. Stop me if I’m being offensive.

Brandy: You wanna be an individual, right? You look like you’re wearing a uniform. You look like a punk. That’s not rebellion. That’s fashion.

Brandy: Rebellion happens in the mind.

When was the last time anyone heard any of these radical “gender critical” TERFs speak about their own gender uniform? Noticing this glaring double standard, I dared to be critical of this TERF gender hypocrisy. I dared notice that that the below TERF opinion leaders share a similar cultural gender expression.

Judging from the TERF response, apparently, it’s only gender critical if the gender you’re being critical of is a trans person’s gender. Instead of offering a critical analysis of in-group gender uniformity, TERFs instead chose to pretend that they were being targeted by the sexist fashion police. 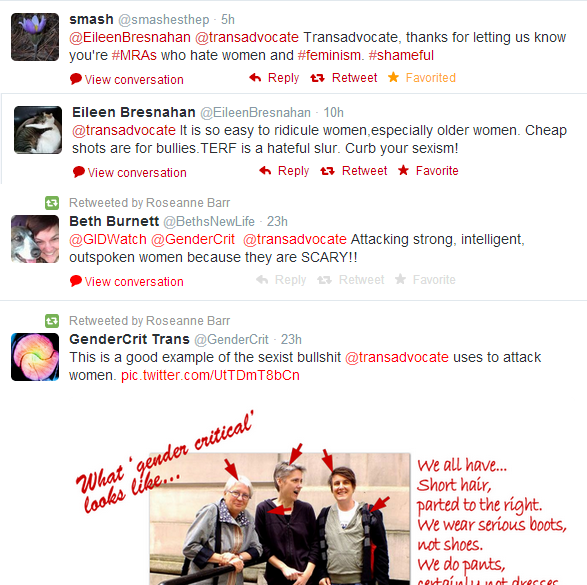 This TERF response is a beautiful example of the vapid intellectual hucksterism that is the TERF movement. What, exactly, does it mean to be gender critical of one’s own gender? Please point to a TERF who has obliterated their own gender identity and expression. 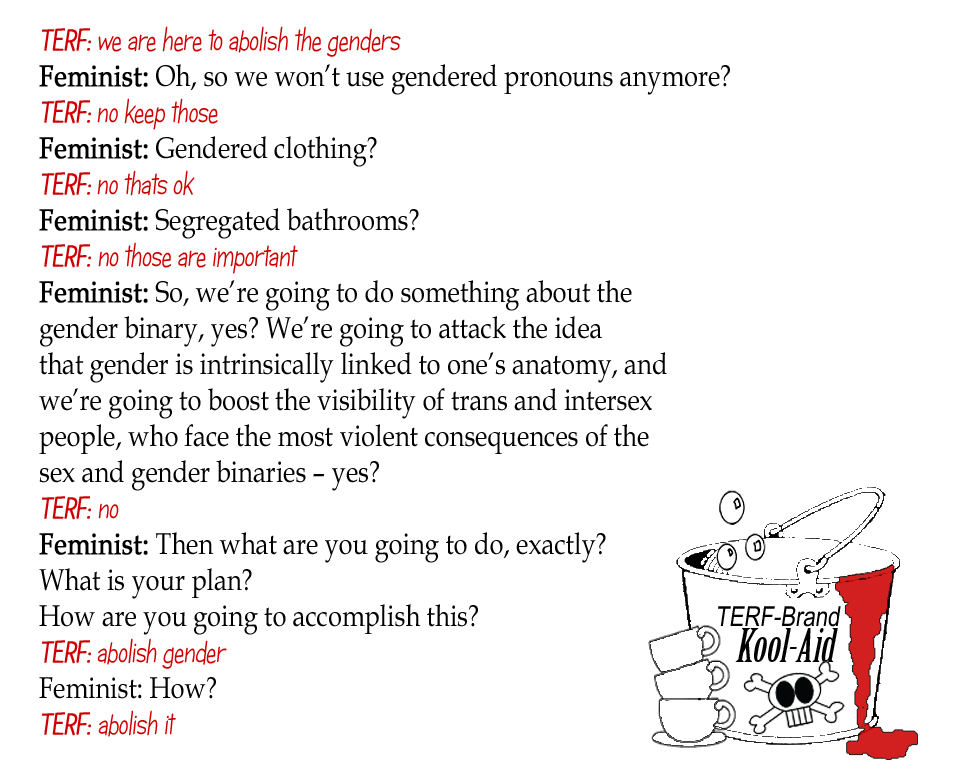 Being a TERF is about the drama of chasing the ghost of empowerment, not actual empowerment itself. Consider Organizing for Women’s Liberation as a case in point. This TERF FaceBook group has over 100,000 likes and the administrator(s) of the group post several times on an almost daily basis. The group, however, is fake. The group’s 100k+ likes are fake and the admins of the group spend their time posting to an audience comprised almost entirely of sockpuppet accounts. Are we expected to believe that New Delhi, India is the new hotbed of TERFism and out of more than 100,000 people, only 77 interact on with their “community?” Compare this TERF hoax with the TransAdvocate FaceBook page. With only a little more than 21,000 supporters, more than 19,000 interact with the community.

When faced with substantive criticisms, the TERF movement is incapable of substantive action. Time and again they make it clear that they’re merely interested in storytelling:

The above hyperbole is from Julian Vigo, author of a recent a transmisogynistic article featured on the popular Counter Punch site. She also pretends to be a “hacker” who trolls suicidal trans people. Apparently, in Vigo’s reality, trans people are misogynistic if they dare notice that TERF leadership engages in in-group gender uniformity. While I’d love to hear all about how Vigo is living a gender-free life, I doubt I’ll ever hear something like that from her. Dealing with that issue in her own life isn’t what interests Vigo. Instead, she would rather tell the story of how women are oppressed because TERF gatherings encounter the same issues that any other hate group encounters when they hold a conference.

According to Brownworth, for the crime of being gender critical of TERF leadership, the TransAdvocate is a hate site and should be banned. You might recall that Brownworth is the “award-winning” journalist who admitted to talking an underage trans youth into exposing himself to her. Her subsequent behavior around that incident caused her to be effectively banned from writing about trans issues by her peers in queer news media.

Being a TERF isn’t about creating meaningful change; it’s about playing a part, SLC Punk-style. In this instance, a critique of TERF gender hypocrisy is met with obtuse condemnations of anti-woman fashion policing. There exists no desire to talk about the specific ways TERFs have abolished their own gender; rather, there only exists a desire to pretend that twitter hyperbole is how one stands against the patriarchy.

There’s a reason TERFs don’t discuss the outcomes of their decades of activism hyperbole. While we know we can lay the deaths of an untold number of trans people at the feet of TERF hate, what else might we point to as being a measurable outcome of the TERF movement? In all the 1000s of pages TERFs write, how many are dedicated to describing the exact way a TERF destroyed their own gender identity and expression in the real world? You won’t hear TERF communities talk about that because it’s not a discussion they’re interested in. Instead, they’re interested in describing how the gender of trans people is part of the patriarchy and how it’s really, really important that trans people stop oppressing TERFs with our existence.

I invite any TERF to reply to this post with a description of their gender-free life. Once you’ve shared with everyone how you obliterated gender within your own life, please share the steps you took. On the other hand, if you’re a TERF who still enjoys their own gender uniforms, maybe you should think twice about privileging yourself to be critical of anyone else’s gender.