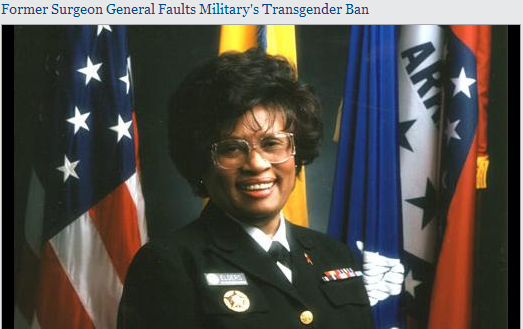 Minnie Joycelyn Elders is an American pediatrician and public health administrator. She was a vice admiral in the Public Health Service Commissioned Corps and the first African American appointed as Surgeon General of the United States.

A study on the feasibility of transgender troops in the military was released today by the Palm Center. The commission co-chaired by former US Surgeon General Dr. Joycelyn Elders and former Coast Guard Director of Health and Safety Alan Steinman found that the ban on transgender service was not only unreasonable but empirically unsound.

The Palm Center study which was funded by a billionaire transgender woman from Chicago, retired colonel Jennifer Natalya Pritzker, reported that the commission…..

The Military has changed many of its regulations to reflect the updated DSM but hasn’t done this regarding transgender service even though the DSM no longer classifies gender diversity as a mental illness.

Brynn Tannehill, Advocacy coordinator for Sparta an organization advocating for LGBT inclusion in the US military issued this statement:

“The Elders Report validates some of the things we have seen from our transgender service members in SPARTA. Transgender people have served, currently serve, and will continue to serve – Marines, pilots, medics, foot soldiers, intelligence specialists, submariners, in every field – with honor and distinction. We are more than capable.”

The United States Military ranks number 40 out of 103 countries studied by The Hague Commission regarding LGBT inclusion. The survey found the United States low ranking was mainly due to the exclusion of transgender people.

Retired Brigadier General Thomas Kolditz, a former Army commander and West Point professor on the commission, said he thinks allowing transgender people to serve openly would reduce gender-based harassment, assaults, and suicides while enhancing national security.
“When you closet someone, you create a security risk, and we don’t need another Chelsea Manning,” Kolditz said, referring to the soldier formerly known as Bradley Manning who came out as transgender after being sentenced for leaking classified documents to the website WikiLeaks.SourceSF Gate

The findings by the Palm Center and the Hague studies will undoubtedly be challenged by the likes of the Center for Military Readiness. Although founded by a woman the center has opposed woman in combat roles and recently derided Chelsea’s transition.

Writers for the TransAdvocate work hard to bring you news and commentary. If you found this article meaningful, let the author know that you appreciate the work they do with a tip!
In category:Kelli Busey
Tags:civil rights Transgender military service
Next Post

Monica's troubles began one night after protesting Arizona’s failed religious anti-LGBT legislation while walking to a bar. An undercover officer engaged her in a conversation which led to her being charged with "manifesting prostitution”, AKA walking while trans. Since Jones…
Read
Previous Post

The highest and deadliest mountain in the world could be just a bump on Monika's road less traveled Manoj Shahi Monika, a third gender person from Kailali, Nepal could be the first documented trans person to climb Mount Everest, but to do…
Read
Random Post

Trading Away Public Accommodations in Maryland

There's bickering over at Pam's House Blend about a statement made by Jenna Fischetti in her public testimony to the Senate in Maryland. She said "Never in the history of transgender-specific legislation has any state gone back and added a public accommodation…
Read
Random Post

Libra Backs Down In Face of Trans Outrage

Following worldwide outrage, an ad campaign for Libra feminine hygiene products, which had been circulating in Australia and New Zealand, has now been put on hold. The campaign had attracted widespread condemnation as offensive to women and hurtful to the…
Read
Random Post

“Pat, The Whole LGBTQI Spectrum of People Are Important In Society!”

Transgender people ain't necessarily homosexual people By Autumn Sandeen Today I read an article in the Argus (A California bay area newspaper) entitled "Homosexuals Important In Society," by PFLAG's Pat Skillen. As a transgender person, I was frustrated a bit…
Read
Random Post

Why I Love Cross-Dressers

Photo by: Mariette Pathy Allen Readers of this Blog may remember a while back that I did a post called Why I Love Fat People.  In simple 1-10 list form, it catalogued many of the reasons why I love Fat…
Read