University of Melbourne Trans Exclusionary Radical Feminist (TERF), Sheila Jeffreys is being called out for her racist comments by the indigenous Australian community. Jeffreys asserted on a radio show that being trans is like blackface. A genderqueer member of the Indigenous people of Australia told the Star Observer:

There is a fear that racist, misogynistic, queerphobic and transphobic people will take her message as truth and enact these prejudices against trans-identified Indigenous and non-Indigenous peoples. By reducing transgender identities to that of histrionic mimicry is more reflective of her prejudice than it is of my understanding and practice of gender as a genderqueer Indigenous person. I cannot change my racial configuration. I can however mold and express my gender identity as unique and valid to my culture. – Andrew Farrell

Sheila Jeffreys, a TERF who also asserts that women who get tattoos are mutilating themselves to appease the patriarchy, is an opinion leader of a branch of “feminism” that most other feminists reject. In fact, the feminist community popularized the “TERF” back in 2008 to try to distance TERF rhetoric from feminism. 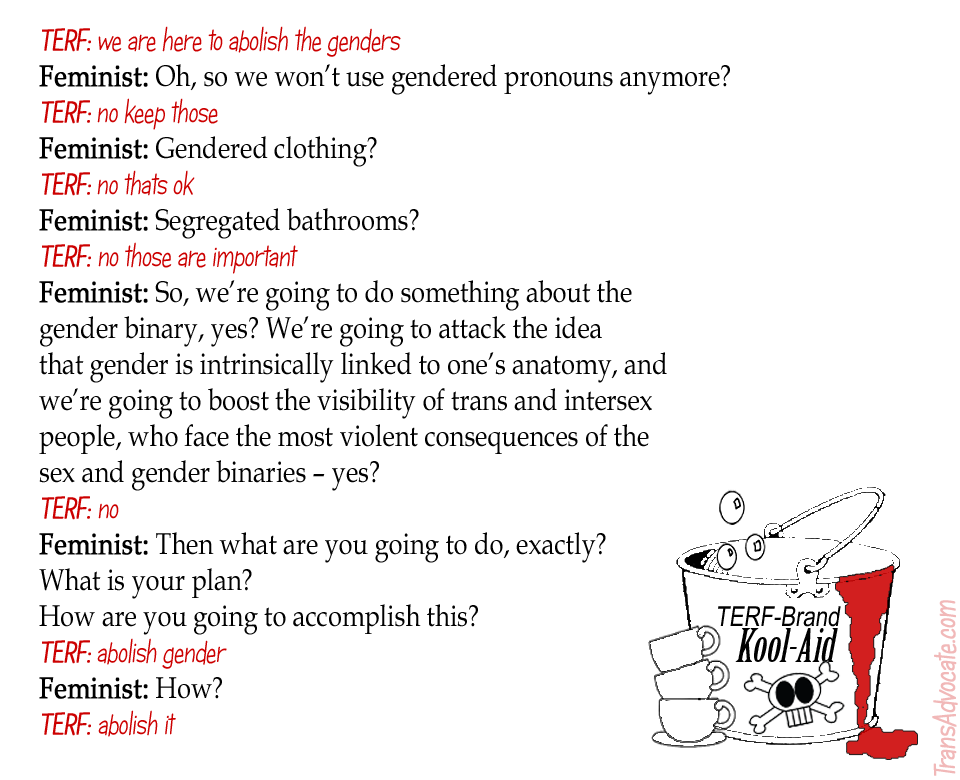 Jeffreys has made a career out of sweeping generalizations supported by anecdotal, cherry-picked data and more than a little equivocation. She will assert that trans surgeries are patriarchy-driven mutilations without ever mentioning the inconvenient fact that her own community – Australian lesbians – pioneered trans surgical care: 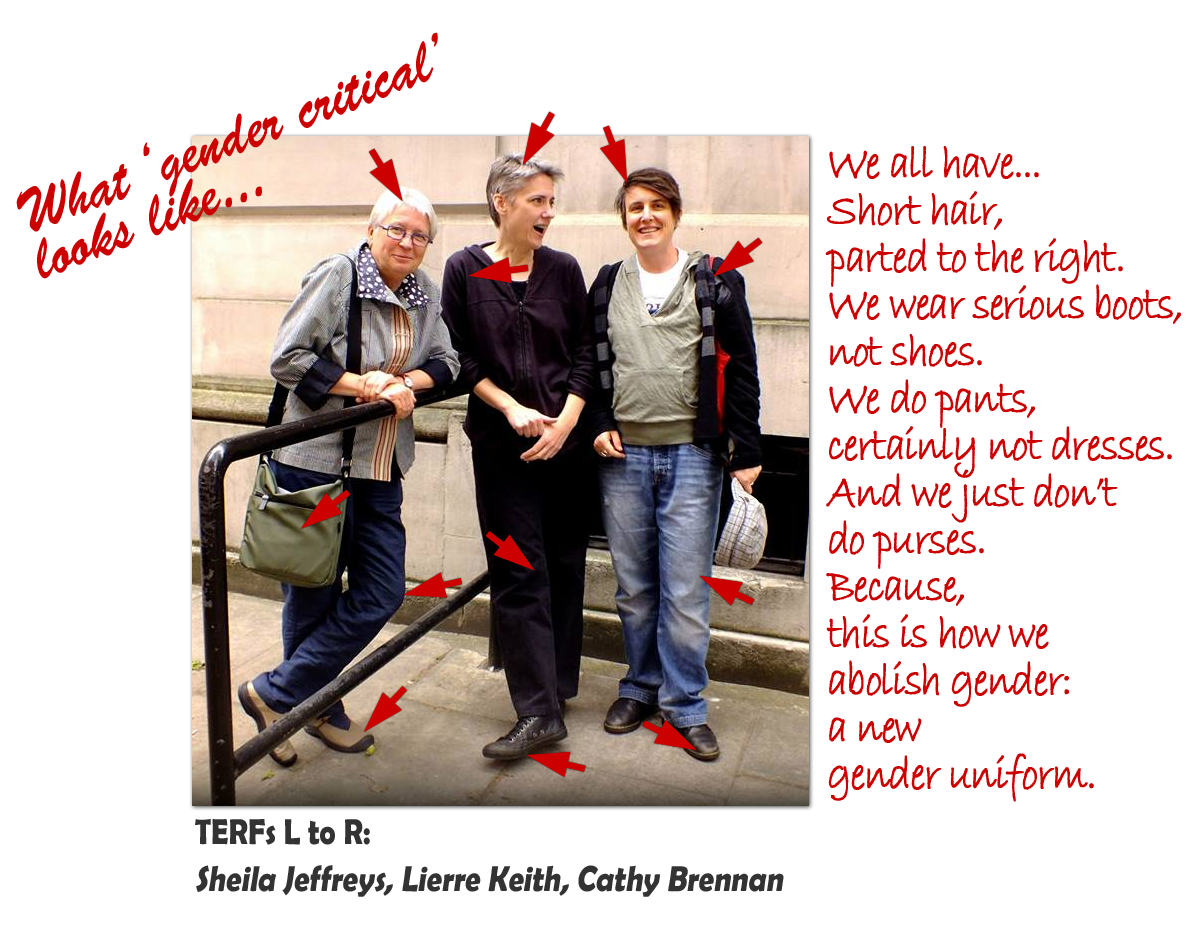 If you’ve noticed that Jeffreys sounds a bit like a right-wing demagogue, there’s a very good reason for it:

“Now one of the things I find puzzling about it is that, when I look at the House of Lords debate on this legislation, those I agree with most are the radical right. Particularly the person I find that I agree with most, in here, and I’m not sure he will be pleased to find this, is Norman Tebbitt… Tebbitt also says that the savage mutilation of transgenderism, we would say if it was taking place in other cultures apart from the culture of Britain, was a harmful cultural practice, and how come we’re not recognising that in the British Isles. So he makes all of these arguments from the radical right, which is quite embarrassing to me, but I have to say, so-called progressive and left people are not recognising the human rights violations of transgenderism or how crazy the legislation is.” – Jeffreys

Criticism of the practice of transgenderism is being censored as a result of a campaign of vilification by transgender activists of anyone who does not accept the new orthodoxy on this issue.

Despite being a Catholic, Liberal Premier Dalton McGuinty of Ontario forced even Catholic schools to promote the homosexual agenda in the schools and have Gay-Straight Alliance Clubs, even though the practice of homosexuality violates Catholic teaching. (So much for religious freedom!)

Framing being gay or trans as a mere practice – something that one does instead of what one is – is a favored rhetorical tool used by hate groups the world over and unsurprisingly, Sheila Jeffreys uses the same type of rhetoric. For if being trans is merely a practice – an addiction, a lifestyle, a pastime, etc – then it can be argued that one can cease engaging in that practice.

People like Jeffreys wrap their hate in the language of feminism because to do otherwise would make it immediately recognizable for exactly what it is. While one might be tempted to dismiss people like Jeffreys as harmless conspiracy theorists attempting to validate their own existence by contrasting it against a strawman of their own design, it’s not as benign as all of that.

The National Center for Healthcare Technology was a government-funded body that reviewed metadata so that Health & Human Services (HHS) would be able to make evidence-based judgments about the efficacy of medical technologies. In short, they informed the US government on what was and what was not medically efficacious. The NCHCT had Janice Raymond, author of The Transsexual Empire: The Making of the She-Male issue their position on the efficacy of trans medical care in a paper titled, “Technology on the Social and Ethical Aspects of Transsexual Surgery.” This position paper makes practically all the same assertions about trans people commonly found in far right-wing anti-trans propaganda; however, unlike other extremist group propaganda, this misleading report informed HHS’ position on trans medical care. The report was available through the Office of the Associate Director for Medical and Scientific Evaluation, Public Health Service.

Until Raymond’s HHS paper, the US government generally supported trans care as medically necessary. I want you to reread that previous sentence. This meant that poor trans people could access psychological and medical care and it also meant that public and private insurers had no basis upon which to reject coverage of trans care.

It was only after the NCHCT pushed Raymond’s bigotry in 1980 that the US government reversed course in 1981 and took up Raymond’s views and rhetoric. Raymond’s hate became the government’s stance. Raymond – a Catholic ethicist, not a clinician – was the architect of the anti-trans stance the US government adopted in the 1980s. This official anti-trans stance soon spread to private insurers and the American trans population soon found itself without access to medically necessary health care.

There’s a reason many trans people lay the death and suffering of untold numbers of trans people at the feet of Janice Raymond. In a time when employment discrimination against trans people became legal, Raymond helped dismantle the trans community’s ability to access trans health care through public and private insurance. Raymond heralded in the era in which trans people (many to most of whom were unemployed, depending upon the study) had to pay out of pocket or go without. In essence, Raymond helped ensure the future of a medical system that was unresponsive to the needs of the trans community at every level.

If you want to get a sense of just how many trans people TERF policy killed, consider the following governmental study published in 2012:

A meta-analysis published in 2010 by Murad, et al., of patients who received currently excluded treatments demonstrated that there was a significant decrease in suicidality post-treatment. The average reduction was from 30 percent pretreatment to 8 percent post treatment.

De Cuypere, et al., reported that the rate of suicide attempts dropped dramatically from 29.3 percent to 5.1 percent after receiving medical and surgical treatment among Dutch patients treated from 1986-2001.

Clements-Nolle, et al., studied the predictors of suicide among over 500 transgender men and women in a sample from San Francisco and found a prevalence of suicide attempts of 32 percent. In this study, the strongest predictor associated with the risk of suicide was gender based discrimination which included “problems getting health or medical services due to their gender identity or presentation.”According to Gorton, “Notably, this gender-based discrimination was a more reliable predictor of suicide than depression, history of alcohol/drug abuse treatment, physical victimization, or sexual assault.”

A recent systematic review of largely American samples gives a suicide attempt rate of approximately one in every three individuals with higher rates found among adolescents and young adults. According to Dr. R. Nicholas Gorton, MD, who treats transgender people at a San Francisco Health Clinic, “The same review also noted that while mental health problems predispose to suicidality, a significant proportion of the drivers of suicide in the LGBT population as a whole is minority stress.” He continues to conclude that, “[f]or transgender people such stress is tremendous especially if they are unable to ‘pass’ in society. Surgical and hormonal treatments — that are [also] covered for non-transgender insureds — are specifically aimed at correcting the body so that it more closely resembles that of the target gender, so providing care significantly improves patients’ ability to pass and thus lessens minority stress.”

– State of California Department of Insurance, 2012

TERFs seem happy with these outcomes and still campaign against trans health care. To quote TERF pioneer, lecturer, and writer Bev Von Dohre, “They expect we’ll be shocked to see statistics about them being killed, and don’t realize, some of us wish they would ALL be dead.”

[Transsexual surgery] could be likened to political psychiatry in the Soviet Union. I suggest that transsexualism should best be seen in this light, as directly political, medical abuse of human rights. The mutilation of healthy bodies and the subjection of such bodies to dangerous and life-threatening continuing treatment violates such people’s rights to live with dignity in the body into which they were born, what Janice Raymond refers to as their “native” bodies. It represents an attack on the body to rectify a political condition, “gender” dissatisfaction in a male supremacist society based upon a false and politically constructed notion of gender difference. – Sheila Jeffreys

The Southern Poverty Law Center (SPLC) is requesting that you assist them in researching the TERF movement.

We’d very much appreciate any information you or your allies could provide of the major players, websites, etc., in the anti-trans world. We would like to take a look at this for a possible investigative story for our magazine, Intelligence Report. I’m especially interested in links between the groups. Any help will be greatly appreciated. – SPLC

Send your stories and experiences with the TERF movement to the SPLC: