Victoria Brownworth has been in the news lately because she is a Trans Exclusionary Radical Feminist (TERF) who has a history of interpreting the trans experience for disempowered trans people. What follows are excerpts from her 2008 Philadelphia Gay News article, Trans youth: Risking life and limb published online July 4, 2008.

“Devon tells me he should have been a boy… He’s handsome and, in the loose shirt, no one would ever guess he was born female… I ask him how old he is. He turns away as he mumbles “18” and I subtract two, possibly three years.

Devon has been getting testosterone and steroids from Rolanda for over a year… Devon drops his pants and gets a cartoon-large injection in his thigh… Then Rolanda applies the breast pump to what was once his vulva and what is now being turned, slowly in this cut-rate plastic surgery clinic, into his scrotum. Rolanda says she is very pleased with how Devon is progressing.

It’s awkward, but I ask if I can look. Devon looks away and then asks Rolanda to remove the pump. He turns toward me and places his hands on his thighs.

Let’s be clear about this: 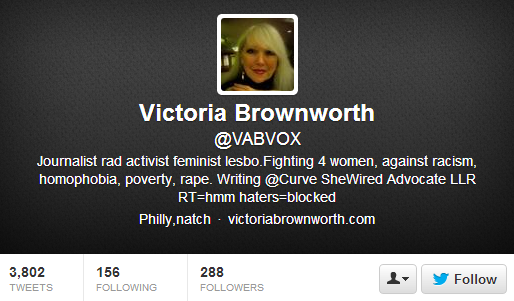 In any other context would this be appropriate? An adult found a young and vulnerable transkid and, from what Brownworth herself writes, it seems that she used her trust to get the transkid to allow her to inspect his genitalia. The adult was then (presumably) paid to describe – in detail – the transkid’s genitalia on the internet for the readership of a media outlet.

The article was part two of a two-part series originally here, but it seems to be gone now (and archive.org does not seem to have a copy).

Part one can be read on archive.org.

I contacted Brownworth about her article: 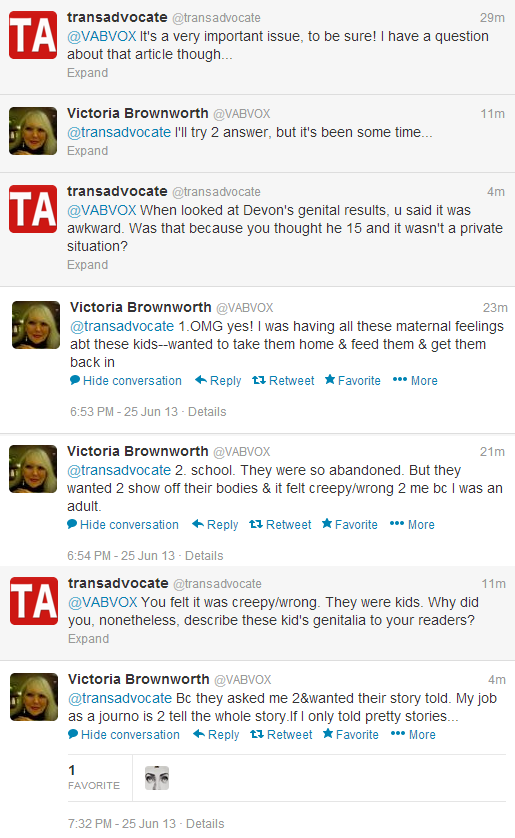 “Because they asked me to…” & favored by @AuntyOrthodox

Ironically, Brownworth shows that she has a finely tuned moral compass where cisgender child exploitation is concerned.

The reason I chose to do this article is that Brownworth, a self-identified radical feminist, has written extensively about power, privilege, the need for acceptance, boundaries and the wellbeing of kids. Yet here – even though she felt it was “creepy,” “wrong” and even though she also felt “anxious” about it – she asked this kid to have access to his genitalia (if you believe what she wrote in 2008).

If the power roles were reversed and it was an adult pre-op transwoman who came across a vulnerable 15/16-year-old cisgender girl with an illicitly obtained genital body modification, would RadFems (or anyone for that matter!) view it as being okay if the transwoman gained access to the girl’s genitalia for a peek? What if the transwoman then described the girl’s genitalia in detail – down to what her clitoris looked like – in newsprint and/or on the internet? What if the transwoman, five years later, tweets that she felt “creepy/wrong” about it but nevertheless defended her actions by saying that the girl asked the transwoman to do it? What would happen? What would be said about that situation?

Take the trans issue out of this. If this was an adult cisgender woman and a vulnerable 15/16-year-old cisgender boy with an illicitly obtained genital piercing or tattoo, we all intuitively understand that it’s inappropriate for an adult to deliberately gawk at the kid’s junk while they’re nude, much less detail what the kid’s genitals looked like in print or the web! Yet because it’s transkid, nobody has said anything for FIVE YEARS!

More from Brownworth:
“When we talk about the role of male-to-female transsexuals in the women’s movement as a whole and the lesbian movement, in particular, I feel we are talking about the ultimate in male power-tripping.”-Victoria Brownworth, Philadelphia Gay News – May 29, 1981, pp, 22, 27 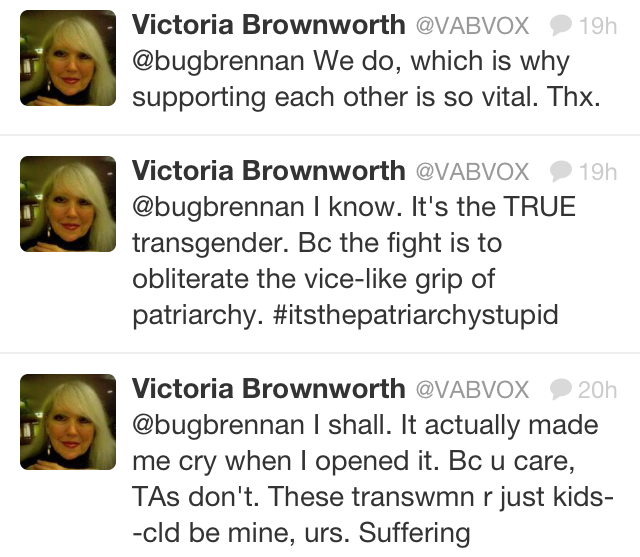 ‘Cathy Brennan: We do, which is why supporting each other is so vital. Thanks.’ 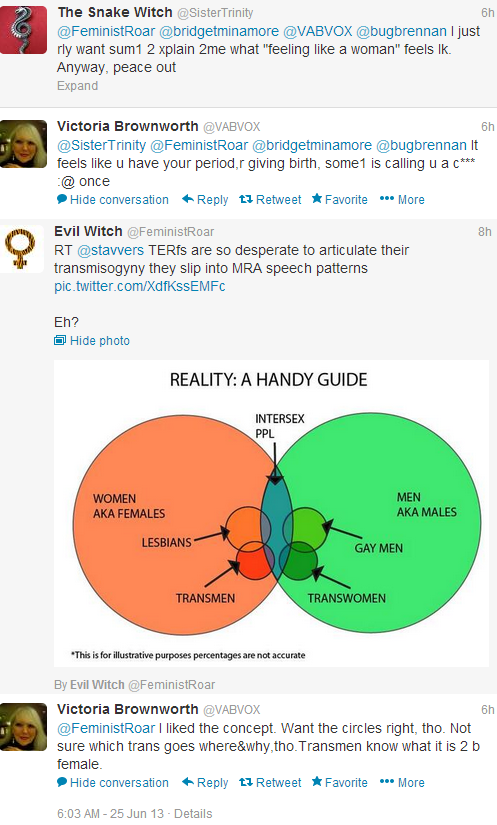 A much older adult, who was famous in the eyes of a kid, talked the minor into exposing themselves to the adult. The adult then took a good long look - long enough to memorize the details of the kid's…
Read
Previous Post

Having read The Philadelphia Gay News (PGN) article by Victoria A. Brownworth titled "Victims of the night: Stories of trans sex workers"  I was very impressed by the authors personal investment in her neighbors well being. Her writing indicates a deep compassion…
Read
Random Post

"Sometimes, We Just Have to Pay Full Price."

My partner is a nut about sales. If it isn't on sale, it doesn't get purchased. So sometimes, when we run out of a breakfast staple and such, I have to remind her of that basic fact of life: "sometimes,…
Read
Random Post

The Bible Tells Me So: Transsexualism Is Not A Sin

I have to admit that ignorant Christians get on my nerves, especially when it comes to discussing transgender people and genital "mutilation".  This was brought to mind yesterday from a tweet I received: reSemblance: The surgical mutilation of ur God…
Read
Random Post

The TransAdvocate Q & A is where we answer your questions. If you’d like to submit a question, go to our contact page and send it in. Today’s question is: I'm pre-transition and my gender dysphoria makes my life miserable.…
Read