As a feminist organization, Secular Woman promotes gender equality. We stand against and combat sexism, hate, intolerance, and misogyny.

We do not, in any way, view the existence of transgender women, genderqueer individuals or transgender men as a threat to the safety of women, female identity, or the goals of feminism.

As intersectional feminists we acknowledge the privilege that cisgender people experience. We aim to dismantle the axis of oppression that this represents.

Unfortunately, not all who claim the label “feminist” agree with us. They do not represent us and we reject their actions and views as unethical and devoid of reason.

We stand in opposition.

Members of our community have been targeted by trans-exclusionary radical feminists (TERFs). Personal information such as former names, current legal names, and photographs have been compiled and displayed on the website “Name the Problem”. Several of the entries are self-attributed to “Pegasus” (a pseudonym of Cathy Brennan, the head of Gender Identity Watch). This information was presented alongside reports describing rapists and batterers of women.

Countless others, including members of transgender advocacy groups have reported similar treatment, as well as other alarming behavior, such as Cathy Brennan contacting employers, schools and medical doctors of transgender women, girls and young men.

It is anathema to our vision of a future in which women have the opportunities and resources they need to participate openly and confidently in every aspect of society.

Cathy Brennan’s tactics, as described, are reprehensible, reckless, and irresponsible as they have the potential to embolden violence and harassment of those she targets and to result in job loss and other discrimination informed by the open knowledge of the target’s transgender status.

Refusal to afford transgender women inclusion, safety, and civil rights is a form of misogyny that is antithetical to feminism.

We invite fellow feminists and secularists, as well as others concerned, to proactively affirm the inclusion of all women as women. Condemn the toxic ideologies used to rationalize hate, fear, and discrimination based on gender.

Stand with us in petitioning the Southern Poverty Law Center (SPLC) to track the activities of Cathy Brennan’s Gender Identity Watch as a hate group in accordance with SPLC’s stated mission. 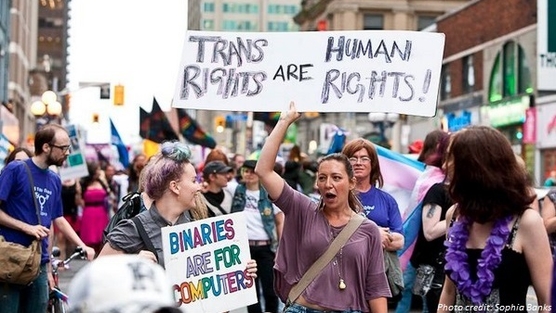 A Community of the Heart: Intersectional feminist speech from San Antonio TDOR

What follows is an amazing speech given by Graciela Sanchez on realizing liberation through building a "community of the heart." Sanchez, a self-identified lesbian Latina queer spoke on the intersections of oppression and of social justice. The last page of the Houston…
Read
Previous Post

The Pacific Justice Institute (PJI) is the ex-gay group who recently bullied a Colorado trans kid to the brink of suicide. At the same time, PJI was working to strip protections for all trans children in California. The PJI-backed coalition worked tirelessly…
Read
Random Post

As the years go by, I tend to think that this culture is becoming more and more progressive. But I've seen snippets of the past that keep reminding me it isn't exactly the case. Take this song for example, it…
Read
Random Post

We've been here before: child molesters & the political right

This was the era of Anita Bryant's crusade against lesbians and gays. "As a mother," Bryant said, "I know that homosexuals cannot biologically reproduce children; therefore, they must recruit our children." This was the predominant belief; this notion that gays…
Read
Random Post

GA Allows Transgender Girl To Use - Oh My! -The Girls' Room

By Lianne Simon Atlanta Gender Variations is a support group for the families of gender variant children. A few months ago they invited me to speak about intersex and share some of my history. One of the issues they shared with…
Read