History will have to record that the greatest tragedy of this period of social transition was not the strident clamor of the bad people, but the appalling silence of the good people. 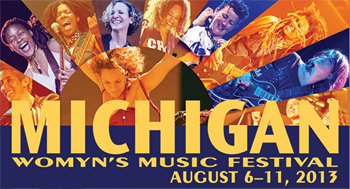 During the civil rights struggles of Martin Luther King Junior’s day, he was appalled by the silence of those whom he believed were, or should have been, on the side of African-American community civil rights.

So with that in mind, The Advocate posted an article on Tuesday (May 28, 2013) entitled Is It Wrong to Perform at Michfest? With the Michigan Womyn’s Music Festival sticking by its policy against admitting openly transgender women, some performers distance themselves or keep quiet. And those performers are certainly being quiet about the festival that is supporting a womyn-born-womyn attendance policy — a policy which I was quoted in the article as saying is a soft sell “segregation today, segregation tomorrow, segregation forever” policy.

Beyond the statement in sub-headline of “some performers distance themselves or keep quiet,” the article author Karen Iris Tucker wrote in the body of the piece:

Other performers reached by The Advocate were loath to take sides.

One of the things that Martin Luther King Jr. stated about the silence of our “friends”:

We will have to repent in this generation not merely for the vitriolic words and actions of the bad people, but for the appalling silence of the good people.

I’m sure that the vast majority of the performers at MichFest are really good people, but women’s community as a whole — a whole that includes trans women — deserve better than the appalling silence of those MichFest performers who are loath to take sides.