The past president of the Southern Baptist Convention Ed Young and current pastor of Second Baptist Church in Houston recently joined Pastor Kendall Baker and David Welch in denouncing Houston’s recent Equal Rights Ordinance.  Young claimed equality in Houston was a “staggering moral issue” because equality, according to Young, Baker and Welch, discriminates against cisgender heterosexual Southern Baptists like himself.  At a rally for ending equality, Young proclaimed, “The verbiage of the proposed ordinance is couched in non-discrimination language but, without question, discriminates against people, like you and me, who want to live by our own personal convictions… [LGBT] rights should end where our morality and rights begin.” 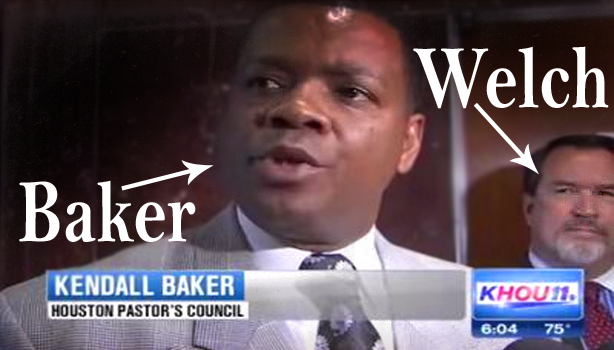 Young, Baker, Welch and the Southern Baptist Convention are no strangers to hypocrisy. Young, a pious cheerleader for the Texas religiopolitical machine, even took the stand to testify that Enron’s CEO – proven huckster Ken Lay – was trustworthy, saying under oath that Lay was “a man who keeps his word.” Young’s son was the subject of national scandal for apparently duping followers of his father’s multi-site megachurch into supporting his excessively luxurious lifestyle. After promoting fears of being inundated by transgender sexual predators should Houston’s equality ordinance pass, Baker, and Welch are currently mired in a sexual assault scandal wherein Baker sexually assaulted and harassed women and Welch attempted to get Baker off the hook. After supporting slavery, segregation, Jim Crow laws, the effort to crush the Equal Rights Act, marriage equality for gay and interracial couples, the “submission” of women to men, efforts to end science-based education, the Southern Baptist Convention has come out as being opposed to the existence of transgender people.

After being convicted of assaulting two young girls, Southern Baptist Convention star Darrell Gilyard began preaching at a new church. In a move that brought international attention, the Baptist church banned children so that the pedophile could continue to preach since Gilyard’s probation forbade him from coming in contact with children. Recently, a judge lifted the ban to allow the convicted child molester access to children.

A native of Palatka, Fla., Gilyard rose to fame in the Southern Baptist Convention in the late 1980s under the mentorship of former SBC presidents Jerry Vines and Paige Patterson. Jerry Falwell’s pulpit gave Gilyard a platform to share on national television his dramatic testimony of growing up a homeless orphan who lived under a bridge, a story that was later discredited.

The attention helped Gilyard attain several pastorates, until confidence in him eroded after a series of sex scandals in the early 1990s. The Dallas Morning News published stories in 1991 saying dozens of women had accused Gilyard of sexual misconduct, with some alleging rape.

Gilyard began as pastor of Shiloh Metropolitan Community Church in April 1993. He resigned Jan. 4, 2008, after a member of the congregation filed a police report claiming Gilyard sent sexually explicit text messages to her daughter.

Gilyard was arrested Jan. 14, 2008, and charged with two counts of lewd and lascivious conduct. He pleaded guilty May 21, 2009, to molesting one girl and sending lewd text messages to another.

While no resolution was made to track the problem of child rapists among its own Convention membership, the Convention did make it clear that they are opposed to the reality of transgender people:

We affirm distinctions in masculine and feminine roles as ordained by God as part of the created order, and that those distinctions should find an echo in every human heart. We condemn efforts to alter one’s bodily identity to bring it into line with one’s perceived gender identity…[and] we continue to oppose steadfastly all efforts by any court or state legislature to validate transgender identity as morally praiseworthy.

After years of membership decline, the Convention leadership is again scratching its head over yet another year of declining membership. Commenting on new findings showing that Convention membership is still in decline, Frank Page, president and CEO of the Convention Executive Committee, said, “The numbers of people in our continent are increasing dramatically while our evangelistic efforts are failing in many places and in many ways.”