The Secretary of State’s office described the process and procedure for qualifying the School Success And Opportunity Act (AB1266) for referendum on the November, 2014 ballot: 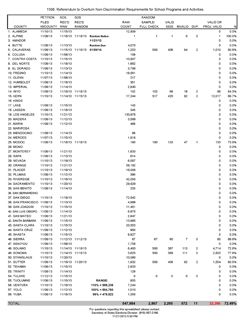 Once the requisite number of signatures has been collected, they must be filed with the appropriate county elections official(s). Counties then have eight working days to report the raw count of signatures to the Secretary of State.

The most recent spreadsheet was released on November 21, 2013.

So with the process and procedures in mind, to qualify California’s AB1266 for a referendum in November of 2014, the Privacy For All Students coalition {which includes the Pacific Justice Institute (PJI)}needed to turn in petitions with 504,760 valid signatures of registered California voters. The coalition reported that they turned in petitions with about 620,000 signatures.

The numbers posted by the Secretary Of State’s office spreadsheet show that 547,984 petition signatures have been raw counted to date, and random checking of petitions so far has indicated a signature validity rate of 72.49%. To succeed, the Privacy For All Students coalition would need a final validity rate of 81.4% to reach the 504,760 valid signatures of registered voters mark to qualify AB1266 for a referendum.

The advocate noted that Kern County (where the city of Bakersfield is located), was “a particular fail.” That county only had a signature validity rate of 69.7%.

It’s far, far too soon to say that the petition drive to put AB1266 up for a vote has failed, but at this point it’s not looking good for the Privacy For All Students coalition.

And, should the referendum signature drive to repeal AB1266 fail, that would be very, very good news for California’s trans youth.

Update: The Secretary of State’s office released a new spreadsheet dated November 22, 2013. The new report has a raw number count for San Bernardino County of 63,348 signatures. The new report updated the overall signature validity rate to 75.46%.

In between those two percentages, the state will force an actual count of every single signature (as opposed to a random check) to see if 504,760 of the approximately 620,000 are valid.