I’ve noticed that TERFs tend to lie. Like, a lot. As in, metric tons of BS.

TERFs far and wide are currently gnashing their collective teeth over the reality that their hate-fest conference (#RadFem2013) was booted from its venue for the second year in a row. Instead of being an emotional adult about their situation, they instead (of course) chose to construct a narrative wherein their bad behavior had nothing to do with their eviction; instead, they’re victims of a conspiracy. In other words, they all chosen to collectively lie about what happened.

Let’s play a quick game. Which do you think the self-identified RadFem did to disprove cis privilege? Did she…

A.) Honestly discuss and review the issues and offer evidence-based critiques?

B.) Present a fallacious argument and lie about the trans experience in a puerile attempt of PWNage?

Actually, the answer is A!

She offered an amazingly insightful critique of post-modern… No, I’m fuckn’ with ya. It’s B. Of course it’s B:

Before I get into deconstructing this RadFem lie, let’s review definitions (cuz TERFs luv them some word games!):

Gender is a generic term we use to refer to any/all aspects of gender orientation, gender identity and gender expression: One’s gender orientation might be male, while their gender identity could be female even though their gender expression is androgynous.  Gender is, in fact, multi-dimensional and not all of these dimensions are always aligned. (e.g., third gender)

When we talk about gender, we’re talking about these three dimensions. When someone says that their gender is hard-wired, they’re saying that they have an innate sense of their physical sex.Note 1

Transgender (AKA: trans, trans*, TG) is an umbrella term that encompasses a variety of people including transsexuals, crossdressers, drag kings and queens, as well as bigender and androgynous individuals.1 Transgender that came into common usage during the 1970s, but was popularized as early as 1965 as a way to refer to transsexuals who wanted genital reconstructive surgery. Today, the term transgender is used to refer to individuals who are not cisgender.

Cisgender (AKA: Cis, cissexual) is an umbrella term that encompasses a variety of people who are not transgender. For example, this term is used to refer to someone who was sexed male at birth, subjectively experiences their sex to be male, identifies as a male and expresses his identity in a manner consistent with a generally accepted cultural male gender role.

Cis-Privilege (AKA, transphobia, heterosexism, cisgenderism) refers to a set of unearned advantages that individuals who identify as the gender they were assigned at birth accrue solely due to being cisgender.2

Examples of cis-privilege as reported by the trans community:

Studies show that the trans population lives under extreme psychological pressures unseen in even active military personnel. Fifty-five percent of trans people 4,5 were found to live with social anxiety. Within the general American population, similar types of anxiety are experienced by only 6.8% of the population while these levels of anxiety were found to exist at a rate of 8.2% among military personal.6 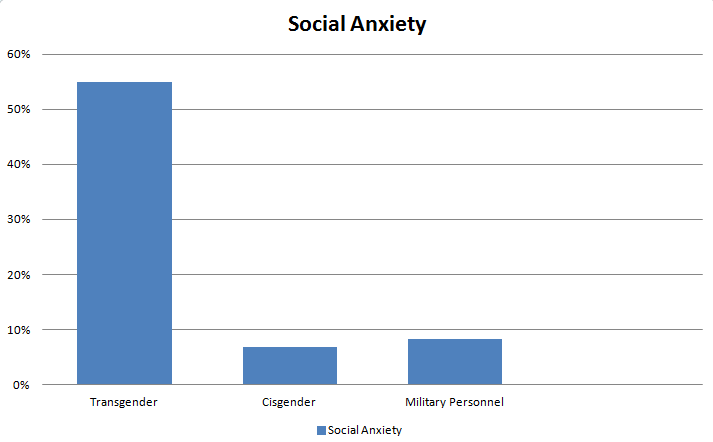 If you, by virtue of being not trans don’t deal with this level of anxiety as a population, that’s a privilege you enjoy. If you don’t have to deal with the following realities because you’re not trans, that’s a fucking privilege:

Being transgender or gender variant implies no impairment in judgment, stability, reliability, or general social or vocational capabilities; however, these individuals often experience discrimination due to a lack of civil rights protections for their gender identity or expression. Transgender and gender variant persons are frequently harassed and discriminated against when seeking housing or applying for jobs or schools, are often victims of violent hate crimes, and face challenges in marriage, adoption, and parenting rights.

Discrimination and lack of equal civil rights is damaging to the mental health of transgender and gender variant individuals. For example, gender-based discrimination and victimization were found to be independently associated with attempted suicide in a population of transgender individuals, 32% of whom had histories of trying to kill themselves, and in the largest survey to date of gender variant and transgender people 41% reported attempting suicide.*

If you don’t have to deal with the following simply because you’re not trans, that’s a fucking privilege:

I have spent so many hours avoiding public multi-stall bathrooms that I have damaged my bladder and put pressure on my kidneys. The problem was a daily one. I’d think about where I was going what bathrooms I’d have access to, how much I drank during the day, whether I’d be with people who could help stand guard…

We live under the constant threat of horrifying violence. We have to worry about what bathroom to use when our bladders are aching. We are forced to consider whether we’ll be dragged out of a bathroom and arrested or face a fist fight while our bladders are still aching .  It’s an everyday reality for us. Human beings must use toilets… If I go into the women’s bathroom, am I prepared for the shouting and shaming? Will someone call security or the cops? If I use the men’s room, am I willing to fight my way out? Am I really ready for the violence that could ensue?

Note, that the jackass who created the image RadFems are bandying about as if it were an accurate representation of the trans experience ends their strawman comic with, “Trans or not, one is not privileged for being forced into the fem gender crate from birth. IT’S THE FUCKING OPPOSITE OF PRIVILEGE.”

This seems to be a beloved (fallacious) argument for RadFems.  The other day I tried to reason with a RadFem about what cis privilege means, and she (of course) simply asserted that there’s no such thing a cis privilege because cis women can’t get abortions in other countries. In both cases, the argument they’re making is “Oppression Olympics. There is no cis privilege.” If you’re going to assert that you don’t enjoy an unearned advantage by virtue of your status as a non-trans person, you’re going to need to explain the health, housing, murder, rape, assault and employment disparities between trans and cis people with something other than a strawman or an infinite regression argument. Note 2

Also, asserting that “Trans people” (as if it were some monolithic group)  are burning to collectively jump into the other one of only two binary cultural gender boxes is a lie.  There’s a huge portion of the trans population that’s not interested in jumping from one binary to the other. Some transmen are butch, some aren’t; some transwomen are fem; some aren’t; some trans people are neither and/or both (and every fucking point from top to bottom and side to side). But, I suppose that reality isn’t convenient for the RadFem version of the trans experience they’ve presented to support their assertion that there is no cis privilege.

TERFs have been making the same vapid assertions and arguments for decades. They hunted and outed trans folk to their employers in the hope of ending careers. They worked with known racists to shut down access to health care for trans folk and then lobbied two US administrations to institute a national program of forced reparative therapy for trans folk. TERF leaders asserted that trans folk should be legislated out of existence. TERFs can and do stand in opposition to trans equality laws and even recently asked that the UN remove trans protections from the books. TERFs killed Filisa Vistima with the exact same poison which is publicly defended, cultivated and spread via the events like RadFem2013.

So, by way of summation, an excerpt from Cesaire:

… Lying is your trademark.
And you have lied so much to me
(lied about the world, lied about me)
that you have ended by imposing on me
an image of myself.
underdeveloped, you brand me, inferior,
That is the way you have forced me to see myself
I detest that image! What’s more, it’s a lie!
But now I know you, you old cancer,
and I know myself as well

NOTE 1: Another game RadFems play is called equivocation. In the trans community, when one talks about “gender identity,” they may be referring to what I call gender orientation or they may be referring to the way in which one might refer to their subjective experience of a cultural sex or they may be talking about both. When a trans person talks about gender identity as it relates to their subjective experience of their body’s sex, RadFems generally attack that narrative by pretending that the trans person was instead referring to their cultural sex designation.  I’m therefore using  language that won’t support the RadFem language games they like to play.

NOTE 2: An example of the RadFem  infinite regression argument is when a RadFem asserts that cis privilege isn’t the problem because the real problem is the patriarchy. According to this regression argument, one cannot assert the proposition of privilege because such an assertion requires a secondary cause. However, playing the rhetorical back-a-step game can be played forever.  This means that any proposition whatsoever can be endlessly (infinitely) questioned, like a child who asks “why?” over and over again:

No, the issue is that assholes keep clinging to bullshit ideas about trans people because, hey… trans people don’t know what the fuck they’re talking about anyway! And BTW, STFU about disparities and cis privilege and justify your lived experience to me because it’s not valid until I say so! 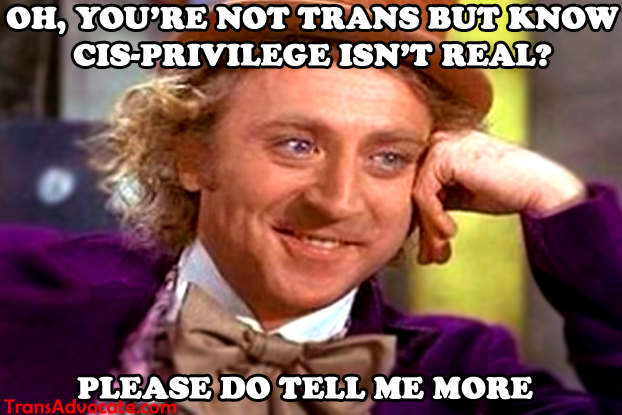 Yesterday I posted a piece titled: Django Unchained: House Slaves Like Stephan and the “Girls” of HBS. I’ve seen the damage of all the abuse and bullying play out across the various trans-communities. I’ve seen the suicides, I’ve seen the substance abuse.I’ve…
Read
Previous Post

Last month we asked TAers how they felt about non-binary expressions of gender. One of the favorite RadFem (TERF) memes they like to propagate is that trans folk are the embodiment of the patriarchy since because their lived experience proves that they only value the gender binary.…
Read
Random Post

The fight continues around the globe to respect the human rights of transwomen to get married.   Check out this interview on Indian television with trans activist Kalki.
Read
Random Post

We've been here before: child molesters & the political right

This was the era of Anita Bryant's crusade against lesbians and gays. "As a mother," Bryant said, "I know that homosexuals cannot biologically reproduce children; therefore, they must recruit our children." This was the predominant belief; this notion that gays…
Read
Random Post

6/6/13, 1:10 PM UPDATE: Sign the petition demanding that Clear Channel issue a public apology! 6/5/13, 8:30 PM UPDATE: I've spoken with Senior Vice President of Communications at SiriusXM and he has made it clear that they do not support the…
Read
Random Post

Editor's Note: This is part of a series on "stealth." The goal of this series to examine the nuanced ways trans opinion leaders conceptualize stealth and how they feel about it. Suzan Cooke kicked off the series with her article,…
Read