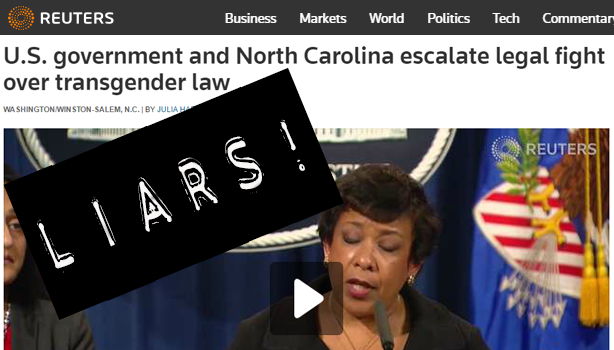 Almost without exception, all news stories covering the US Attorney General’s suit against North Carolina omits the rather significant fact that when North Carolina took federal money tied to the Violence Against Women Act (VAWA) and Title IX, they signed a contract with the federal government explicitly agreeing to not discriminate on the basis of “gender identity”. Unlike what you may have heard, this breach of contract is why North Carolina is being sued.

While the media has sensationalized this story by focusing on the North Carolina Governor’s talking points of “federal overreach” and “federal bullying” while blaming liberals in Houston, Texas for his actions against the trans citizens of North Carolina, the actual story doesn’t leave much room for the media to pander to the “transgender debate” trope. The actual story doesn’t allow the media to make the US Attorney General’s suit ambiguous, about morality, or even what “gender identity” means. The reason for this is that the Republican Congress defined what “gender identity” meant in 2013. Moreover, the Republican Congress set the very “gender identity” nondiscrimination standards under which North Carolina is being sued.

It’s telling that the media seems unwilling or unable to tell the public what the Department of Justice (DOJ) told them during the press conference in which the DOJ suit against North Carolina was announced:

“We also bring a claim in the Violence Against Women Act, a more recent statute specifically designed to prevent discrimination against transgender people by entities that accept certain federal funds. As with Title IX, entities that accept federal funds under VAWA, including UNS and the NCDPS, pledged that they would not discriminate against sex or gender identity. Our complaint seeks to enforce that pledge and hold those entities accountable for the kind of discrimination required by HB2.” – Vanita Gupta, head of the Civil Rights Division at the Department of Justice

Here’s why the US Attorney General said Vanita Gupta’s division was filing suit against North Carolina:

Even though VAWA and Title IX funding comes with explicit prohibitions regarding discrimination on the basis of “gender identity”, the North Carolina Governor has claimed numerous times that Congress needs to figure out what “gender identity” means since they’ve not addressed it. Apparently, Governor McCrory doesn’t know that in the very Congressional Act he took money from –the VAWA– the act spells all of this out.

Even if a Republican Congress hadn’t passed the above language in 2013 (286 to 138), the VAWA explicitly states exactly who has the power to say who must be served with VAWA funding as an “underserved population”:

With regard to Title IX, when the University of North Carolina took Title IX funding, they signed a contract stating that they wouldn’t discriminate based upon “gender identity.” In keeping with Title IX policy, the University of North Carolina has a Title IX coordinator. Her name is Elizabeth Hall. Here’s what the Department of Education’s 2015  Title IX Resource Guide for Title IX coordinators states:

Title IX protects students, employees, applicants for admission and employment, and other persons from all forms of sex discrimination, including discrimination based on gender identity or failure to conform to stereotypical notions of masculinity or femininity. All students (as well as other persons) at recipient institutions are protected by Title IX—regardless of their sex, sexual orientation, gender identity, part- or full-time status, disability, race, or national origin—in all aspects of a recipient’s educational programs and activities. – Page 1

The Title IX coordinator should also help ensure that transgender students are treated consistent with their gender identity in the context of single-sex classes. – Page 22

Again, North Carolina knew exactly what it was agreeing to when it entered into a contract with the Department of Education to receive Title IX funding. The only actual story here is that North Carolina wants the special right to receive funding under federal contracts they’ve declared they’ve no intention of honoring.

If defaulting on federal contracts North Carolina knowingly signed is the actual story behind the DOJ’s suit, why is the media only interested in talking about “dueling lawsuits”,  the “transgender debate”, or how there’s ambiguity to the DOJ’s suit? If “gender identity” was codified into law passed by a Republican Congress, why is the media perpetuating the myth that Congress hasn’t addressed the issue of “gender identity” discrimination yet?