I’m sure many of you have seen the various protest images of Vladimir Putin’s image colored as if he’s wearing false eyelashes and makeup. The images are used to protest against anti-queer oppression in Russia. 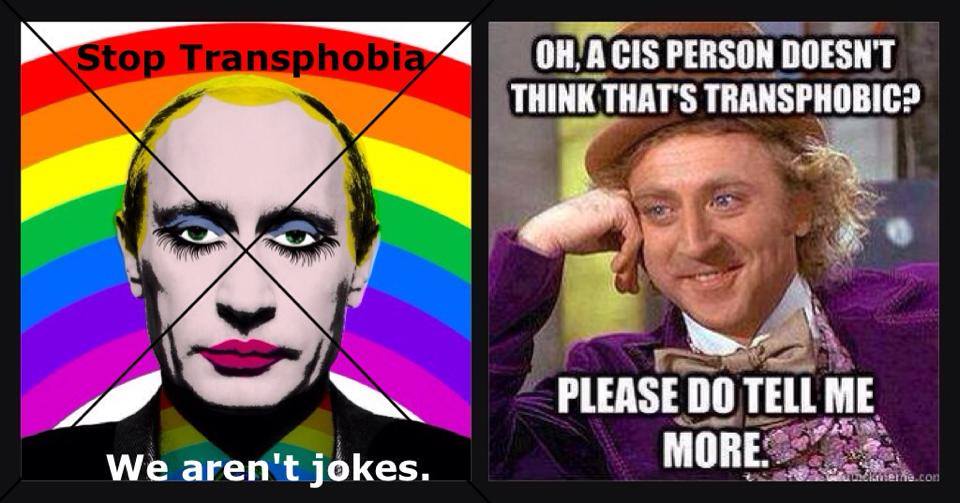 Do you think the image is problematic? Some feel the image uses trans expression to shame and mock Puttin, thereby degrading the trans experience.

Here’s what some of you have to say about this on the TransAdvocate FaceBook page:

This is both trans misogyny and misogyny…because it is making a joke out of femininity. My being a woman and expressing myself as such should not be automatically labelled “degrading” or “weak”. Men are not inherently better than women.The world needs to grow up and realize the harmful things behind what they do…especially because they don’t see it.

Why is it shameful for him to look like a woman?

It does seem a bit counter-intuitive, but I’ve gotten used to seeing trans issues and rights thrown under the bus in favor of the more-popular gay and lesbian agenda.

Yeah, let’s cut that shit out. Putin is enough of a joke on his own.

First of all, not all women wear make-up. Also, the “make-up application” used is more clownish, not exactly feminine. I don’t think the point is to make him look like a woman but points more to the over over exaggerated theatrical display used by some drag queens. I think it is a bit insulting to trans women to assume they identify with such a false representation of what they look like or want to look like.

Insulting him in a way that he would be really insulted, fair game!

The makeup style definitely looks “drag”. I don’t really find it to be offensive.

[/column]
In category:Opinion
Tags:in the media transmisogyny
Next Post

Recently the South Florida Gay News interviewed me for an article on the TERFs, Cathy Brennan and her group, Gender Identity Watch: The Web is where this feud appears to have escalated with Brennan trading barbs between journalists and advocates from…
Read
Previous Post

Of expectations and education

I recently posted the following to my FaceBook page: Is it me or is there a lot of "JESUS! STFU already! I'm complementing you and think you should have rights! What, now I have to stop asking about your genitals…
Read
Random Post

The list of The Transadvocate contributors is growing by two today! Please Welcome Matt Kailey and Jennifer Carr! Kailey is a transsexual man and an award-winning author, blogger, and community leader, as well as a nationally recognized speaker and trainer…
Read
Random Post

‘The Secret History of Love’: An Interview With Choreographer Sean Dorsey

Sean Dorsey is an award-winning choreographer, dancer and writer. Recognized as the United States’ first out transgender modern dance choreographer, Dorsey has won audiences and accolades from San Francisco to New York with his powerful dance-theater. Dorsey is the founder…
Read
Random Post

TERFs tend to behave much like a fundamentalist echo chamber so that once a new malicious anti-trans trope is created, it is quickly disseminated and replicated until the trans community and/or allied communities must waste their time addressing the fallacies. Therefore, the TransAdvocate has…
Read
Random Post

The Fox News headline "Students Who Refuse to Affirm Transgender Classmates Face Punishment" sets the stage for this "Cultural War" against trans people written by Todd Starnes. Deconstructing Fox lies. The headline of Starnes article is a lie. There is…
Read