Having observed numerous conversations predicated on fundamental misunderstandings concerning trans advocacy, I put together this TransAdvocate 101 to compliment our Trans 101. If cis and trans advocate communities wish to better communicate, we need a foundation from which informed conversations may take place. Therefore, I will succinctly:

The goal of this TransAdvocate 101 is to clearly and concisely review some primary sources of misunderstanding that have come to shape trans advocacy today. 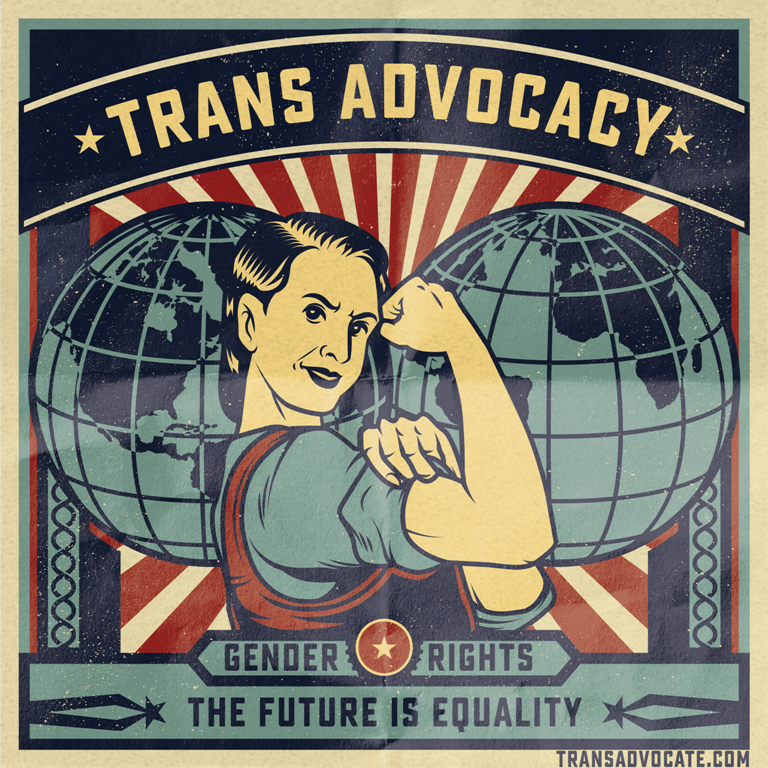 Our trans advocacy is rooted in the following model:

These three fundamentals define our experience in terms of our material condition and we language this experience gender orientation, expression, and identity:

Generally, the reasons trans and cis people reshape their bodies are different.

For cis people: body modifications are undertaken in order to better embody one’s gender identity, that is, sexed persona. Each year, cis people spend billions on sculpting, lifting, tucking, and enhancing surgeries, diets, gym memberships, cosmetics, and hair (removal/addition/styling) to construct their bodies in ways that more closely match their sexed persona. In other words, cis people are chiefly concerned with making their body match their gender identity.

For gender dysphoric people, gender orientation tends to be the primary reason for modifying their phenotype. For cis people, maintaining and accentuating culturally constructed sexed personas tend to be the primary issue driving one to modify their body. Cis people can mistakenly believe that trans people modify their phenotypes for the same reasons cis people modify their bodies which may lead cis people to project their complicated feelings about their own body modification impulses upon trans people.

In 2013, when the American Psychiatric Association issued the DSM-5, the DSM-IV category, “Gender Identity Disorder” (GID) was removed. Many media outlets wrongly reported that GID was being renamed “Gender Dysphoria” (GD), leading many to believe that GID was basically the same thing as GD. This is a mistaken belief; GID and GD represent two very different diagnostic groups:

GID group: mostly comprised of those who experience anxiety because they are, in some way, gender non-conforming as well as a relative few who are debilitated by a mismatch between their gender orientation and their phenotype.

GD group: comprised of those who are debilitated by a mismatch between their gender orientation and their phenotype.

Cis media has enjoyed proclaiming that around 80% of GD kids will stop having GD based on old GID studies that found that most kids with GID desist in having GID. Dr. Zucker, a name that is often associated with this media claim stated that most of the children he worked with didn’t have DSM-5 GD in the first place and were, instead, merely gender nonconforming. Moreover, he likewise stated that most kids with DSM-5 GD do persist in having GD and should receive medical intervention to assist them in their transition1

For an example of the way this claim is used in cis media, please see this article. If you would like to understand how and why anyone thought it would be a good idea to mix gender dysphoric people into a larger group of non-gender dysphoric gender non-conforming people and diagnose them all as having the same “disorder” (GID), a deep dive into how and why this mixed GID group was created can be found here.

Talking Past Each Other

To take one hot-button issue, when trans advocates talk about trans care for trans kids, cis people tend to hear that trans people want to force gender non-conforming kids into a medical transition in order to resolve their gender non-conformity. In the absence of Trans Advocacy 101s like this one, similar misunderstandings, in 1000 variations and iterations, have come to define the state of trans activism today.

There are, by orders of magnitude, more cis people than trans people in the world. When one considers the amount of discourse happening around the trans experience, due to sheer numbers, a cis understanding of “trans issues” is dominant in our society today. This dynamic ensures that the dominant “trans” narrative is also a false narrative that is repeated, analyzed, and criticized ad nauseam by a largely cis audience, reinforcing the validity of this dominant (and factually inaccurate) “trans” narrative. When trans people protest the propagation of the dominant (and factually inaccurate) “trans” narrative about the trans experience, trans people are told that we are stifling free speech, that we are snowflakes, or that we just need to learn to perform better public “debates.” When trans activists express anger, resentment, and/or frustration with this dynamic, cis people can respond with their own anger, resentment, and/or frustration because a lot of cis people have already invested more time and attention into trying to understand the dominant (and factually inaccurate) “trans” narrative than they ever wanted to in the first place and come to perceive trans activists as pushy, bossy, and unreasonable.

Resolving these misunderstandings in the face of an army of trolls who traffic misinformation, civic leaders who attempt to pass anti-trans laws, and cis anger, resentment, and/or frustration while also trying to support equality for cis, trans, and intersex people is the primary purpose of trans advocacy today.