Recently the South Florida Gay News interviewed me for an article on the TERFs, Cathy Brennan and her group, Gender Identity Watch:

The Web is where this feud appears to have escalated with Brennan trading barbs between journalists and advocates from the transgender community who claim Brennan and her blog are insensitive.

“I believe the petition served to clearly demonstrate that many thousands of feminists view the GIW team to be a hate group,” said Cristan Williams, editor of Transadvocate.com. “I think that it also offered a chance for Brennan’s victims to connect with many others and understand that they were not alone.”

Brennan discounted Williams’ accusations as “nuts” and said “Cristan has an axe to grind and let her grind it.”

Meanwhile at the Southern Poverty Law Center, where the Intelligence Project has been heralded by the National Review as “one of the most respected anti-terror organizations in the world,” Beirich acknowledged there have been some issues with Gender Identity Watch, but refused to deem it a hate group.

“It’s not that we don’t consider some of the things that have happened there to be really ugly,” Beirich said. “It doesn’t qualify as a hate group under our definition because a hate group has to have some membership, like a group.”

Some have claimed that the article failed to adequately describe the issues. The piece is short an only briefly quotes the interview questions I answered. Missing from the SFGN piece is any historical context. For the sake of clarity, here are my complete answers to the SDGN’s interview questions:

South Florida Gay News: What is your prior experience with Cathy Brennan and Gender Identity Watch?

Cristan Williams: The historical TERF movement was directly involved in stripping access to psychological and medical care from the trans community in the 1980s. The term TERF (Trans Exclusionary Radical Feminists) was popularized in 2008 by the non-transgender feminist community because these women felt as if their discourse was being colonized by an extremist faction. Feminist women began using this term as a way to distinguish the TERF rhetoric from larger feminist discourse.

I encountered Brennan as being an opinion leader in the modern iteration of the TERF movement. I became aware of Brennan a few years ago as the power behind an effort to have trans people stripped of UN protections. The ideology promoted by Brennan’s group is featured in TERF conferences, meetings, lectures and direct actions across the globe.

GIW calls itself a team, not a group. The GIW team promotes a world view in which trans people and protections are not only watched, but correlated with the suffering of cisgender women. Racist groups employ similar tactics by tracking improvements in racial equality while correlating gains in equality with perceived wrongs committed by groups they exist to oppress.

For instance, here are a few posts from today’s GIW social media stream: 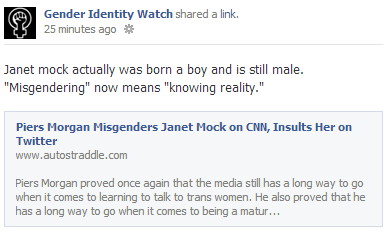 In Brennan’s reality, this isn’t bigotry

Promoting propaganda from an ex-gay group

Brennan’s group asserts that the term TERF is a pejorative and rejects the idea that people are born with a subjective awareness of the body’s physical sex. Brennan’s brand of “feminism” promotes the notion that women can and probably should choose to become lesbians (the so-called political lesbian) and that people – like myself – who disagree with her are men’s rights activists (MRAs).

SFGN: What are your thoughts about the petition to ask SPLC to declare GIW a Hate group?

CW: The petition was created by a feminist group called, Secular Women. I believe the petition served to clearly demonstrate that many 1000s of feminists view the GIW team to be a hate group. I think that it also offered a chance for Brennan’s victims to connect with many others and understand that they were not alone.

SFGN: What is your role with The TransAdvocate.com?

CW: I am the editor.

[/column]
In category:Opinion
Tags:Cisprivilege feminism in the media TERF transphobia
Next Post

On February 19th an episode called "Tr*****s Twerk It Out" was broadcast on the Jerry Springer show, as we are all aware this show has a long history of making transgender women the object of disgust and disdain. To be…
Read
Previous Post

I'm sure many of you have seen the various protest images of Vladimir Putin's image colored as if he's wearing false eyelashes and makeup. The images are used to protest against anti-queer oppression in Russia. Do you think the image…
Read
Random Post

The relationship between Cathy Brennan and the SPLC

Disco Sexology, Part Five: Zucker's Patient Disco Sexology, Pt. 7: Affirmative Therapy By Cristan Williams Upon completion of this series, this work will be released, in its entirety, as both an audio and ebook. Installment Preface Welcome to the sixth installment in this…
Read
Random Post

The Wesboro Baptist Church. It's been a nuisance to the LGBT community since 1991 when it took its first steps to publicly advocate against gay people. We've all heard of them. They were a cause for many a family members…
Read
Random Post

Standing in the Light

“Oh,” was my mother’s response when I explained why we aren’t coming to Thanksgiving dinner at her house. “No one else will be here. Everyone else is going to another house,” she compromised. In her mind I’m sure she thought…
Read