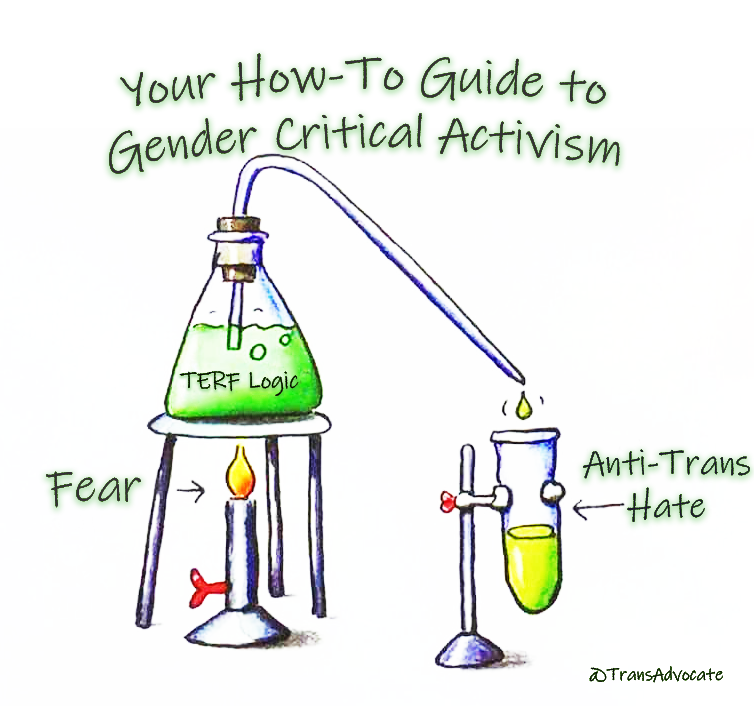 Do you fear trans people and want to rationalize the simmering hate you feel?

We here at the TransAdvocate have spent almost 2 decades debating and debunking anti-trans nonsense and we’ve learned a thing or two about the irrational knots bigots tie themselves into when they try to pass off their fear and hate as fact and reason. Therefore, we’ve put together this handy-dandy list of the BS arguments that you, a budding bigot, are likely to find really, really compelling.

Before you can truly rationalize your hate, you need to learn how to question a trans person’s humanity, volition, and body autonomy without sounding like the awful bigot you are. Therefore, the very first thing you need to do is talk about trans people as if they were actions, not people because, if “transgender” is merely a behavior, then people can cease engaging in that behavior! If you can talk about children being “transed” and others engaging in the act of “transgendering”, people might not notice that you’re trying to eradicate trans bodies from the face of the earth.

2.) Dehumanize: It’s an ideology, not a person!

It’s nice to switch your dehumanization up a bit, otherwise, people might catch on to the rhetorical con you’re perpetrating. So, pretend that trans people are actually an idea or myth that someone is trying to push upon rational people because, if “transgender” is an ideological -ism or lifestyle acquired through certain websites, non-American cartooning styles, school, or peer-groups, then people can be deconverted/repaired through certain “therapies.”

Therefore, you’re not torturing kids with reparative therapy that scars its victims for the rest of their lives. Instead, you get to tell yourself (and anyone else who will listen) that you are a hero, saving people from an idea rather than trying to fracture their sense of self for your own comfort.

Protip: forcing children to undergo illegal and immoral torture makes you a hero, not a villain. Keep telling yourself this.

3.) Dehumanize: It’s the Jews, Big Pharma, and/or anti-feminist conspiracies, not a person!

Thank god for Jorden Petersons, Joe Rogen, Ben Shapiro, and Debra Soh! They tell it like it is because you just know that 10, 20, 50 years ago, trans people weren’t around. You know they weren’t in the news. You know all this trans surgery stuff –especially surgery for trans men— is just a new fad.

This trans stuff is just the next stage in the Modernist-Post-Modernist-Marxist-Fascist-Feminist-Anti-Feminist-Nazi-Jewish-Hitler-Communist-Socialist-Queer Theory-Big Pharma conspiracy to tear down “The West”.

Now that you think about it, trans people are just… gross, aren’t they?

I mean, just thinking about this existence of a trans body kinda makes you want to puke, doesn’t it? Trans people are just gross and it’s kind of strange that it’s not exactly socially acceptable to openly talk about how monstrous and putrid trans people are.

Protip: Sheeple won’t understand how reasonable it is to be disgusted by trans people. There are only a few places on the internet that actually cares about free speech: right-wing comment sections, troll forums, and the “gender critical” section of Mumsnet.

5.) Otherize: They’re coming for your women-folk!

Now that you’re equipped with the rhetoric designed to hide your bigotry, put it to use by scaring everyone you can!

Find a right-wing legislator (preferably a cishet man) and let them know that America’s women-folk need big, strong cishet men to protect their weak and vulnerable women because transgender ideology wants to make it legal to RAPE women in public bathrooms, public changing areas, public gyms… basically, any and everywhere that’s public. If it’s a space where women are, trans people want access so they can rape.

The point is, if trans people are banned from all public areas, then they can’t participate in public life. If someone points out that this is Nazi-level bigotry, feign grave offense and say that you’re just trying to keep your women-folk safe. After all, this is about commonsense safety measures, not the wholesale eradication of trans people from public life!

6.) Otherize: They’re coming for your children!

This is where you’re really going to put your new language skills to good use!

When you absolutely, positively, have got to dupe someone into not thinking very much about what you’re actually saying, tell them that someone’s coming after their children. This rhetoric worked to rationalize the oppression of feminists in the 1970s as well as Black, Jewish, gay, and HIV+ people. Even if the person you’re talking to didn’t fear trans people before, you can nonetheless scare the shit out of them by saying little Jimmy or Betty-Sue is being recruited into the transgender lifestyle/cult/ideology at school, online, and on the playground!

With a little pseudoscience, a solid application of your new language skills, and a little terror over child rape and/or transgender indoctrination, you can seem like a caring human being instead of a terrible bigot.

ProTip: Don’t actually say, “THINK ABOUT THE CHILDREN!” or “Save our children!” Even though this is the message you’re spreading, using these old slogans will tip people off that you’re just recycling anti-gay rhetoric from the 1970s and 80s and repackaging it for use against trans people

7.) Most importantly: MASK THAT SHIT!

In your quest to eradicate the world of trans bodies, here’s the most important thing you must do: NEVER, EVER LET THE MASK SLIP!

Sometimes it will feel tedious to spend so much of your time and energy into making your bigotry seem like it’s something else. Watching what you say, how you act, and never being truthful about who and what you are –a huge fucking bigot– is really hard and what makes it even harder are all the smug activists out there trying to out you! Being a closeted bigot is hard, but remember that you’re living for something more important than you: the self-referential ideology detailed in this article!

If people knew that you were willing to torture children and hurt a lot of people just so that you don’t have to deal with your own emotional problems associated with gender, they’d never want to be around you. Being in denial about this fact is your best bet. In fact, if you can find a group (alt-right, religious right, TERFs, etc) to join who will reinforce both your denial and your commitment to your ideology, you’ll feel much better about yourself. In fact, you’ll find that you don’t need all of those pesky people in your life who might not understand what and who you really are. All you need is your new group of ideological friends, because the more you run around warning people of the “trans cult” the more love you get from them. And really, like the Beatles said, “love is all you need”.

So, keep pretending and keep projecting. The problem isn’t you, it’s those damn trans people. They’re the problem. You’re sacrificing so much for the cause, but you can do this!