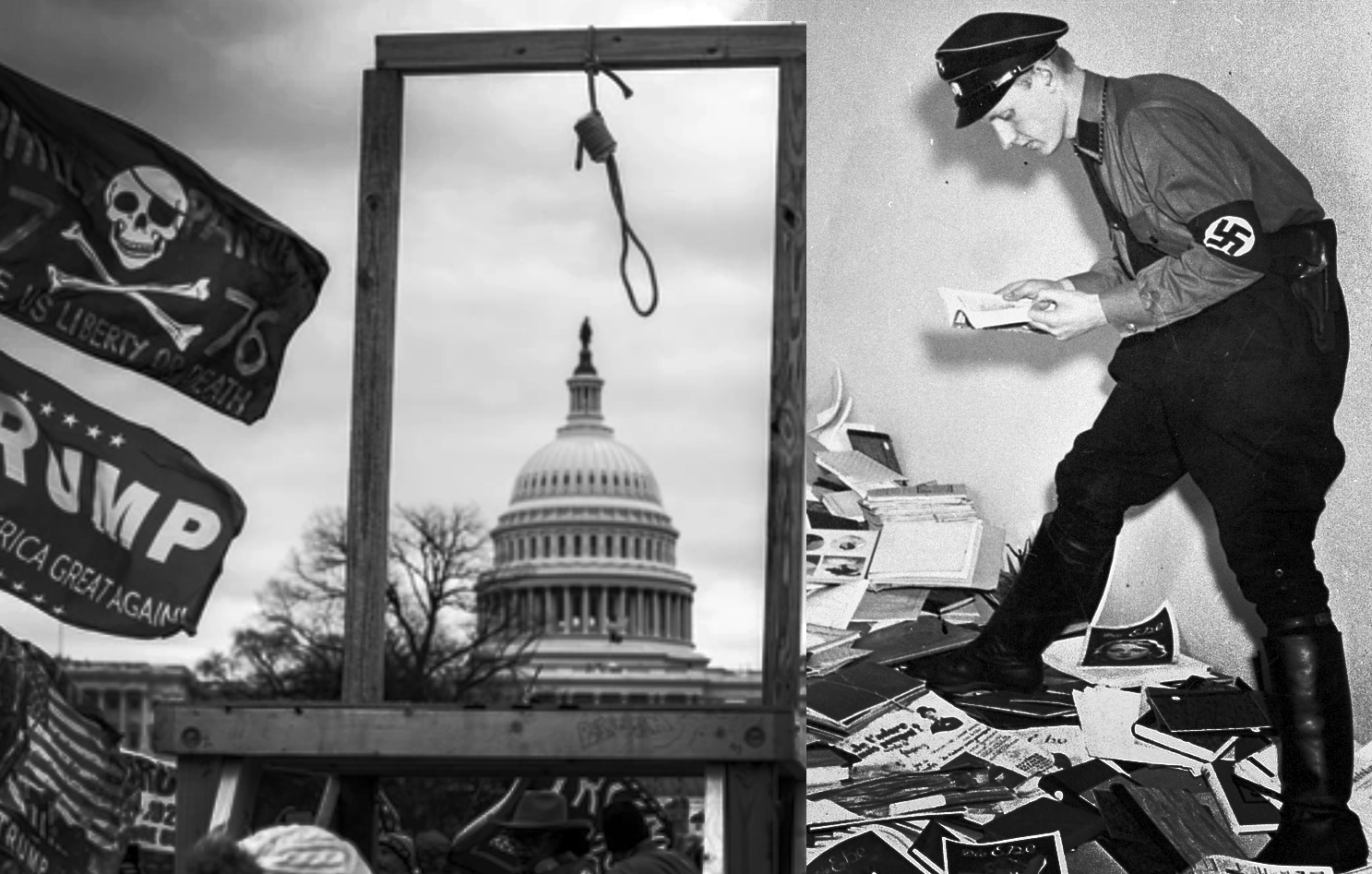 Anti-feminism, anti-Semitism, homophobia, transphobia, xenophobia, and racism are THE entry points to fascism. Remember, the FIRST Nazi book-burning was the burning of books from a trans clinic.

Given that, would it surprise you to know that Hitler was quoted to motivate Trump’s insurrectionist crowd?

Groups with fascist tendencies all use anti-trans hate as a recruitment tool. Consider this question: What happened to the lead-up to Trump’s 2015 presidential run?

A man named Steven Hotze –infamous for getting up on stage to swing a real sword about while screaming about how he’s going to drive out all of the ‘homofascists’ (projection much?) from his city, paying a fascist who kidnaped someone for “stealing” Trump ballots, and advocating for BLM activists to be murdered— formed a hate group to promote religious nationalism by attacking transgender people:

Hotze’s campaign rolled out a how-to kit (which the TransAdvocate protested) that other locations implemented, coming to a head with North Carolina’s infamous HB2 or the “Public Facilities Privacy & Security Act.” While transphobia is a time-tested recruitment tool for fascist movements, in every instance, fascism always ends in the same place:

In consideration of this inevitability, intersex activist and TransAdvocate contributor, Dr. Cary Gabriel Costello noted the following about Trump’s insurrection:

The Congressmembers who were hustled to safety were not the only people in the buildings beside the rioters and the security forces. A congressional staffer who is a visibly trans woman was assaulted by the mob, for example. During the Trump rally that wound the mob up, Don Trump Jr. had ranted to the cheering crowd about his father’s unceasing battle to stop trans women from being recognized as women. Without Trump in office, (cis) women and girls would never be safe in bathrooms or able to win sporting competitions again, he fumed. The crowd roared its transphobic agreement. The insurrectionists with zip-tie handcuffs in hand were roaming the halls looking for Pence and the Congressional “traitors,” but when they saw a trans woman, bonus. . .

With the knowledge that anti-trans violence –and hate crime in general— has risen with the tide of Trumpist fascism, why did Donald Trump Jr. feel that he would motivate his insurrectionists by going on an anti-trans rant?

What’s more, after Trump lost the House, Senate, Executive, and failed in his coup d’etat, why are right-wing groups ramping up efforts to target transgender people for anti-transgender legislation?

Within trans discourse, the “phobia” in transphobia usually refers to the strong behavioral tendency to reject (eg, a “hydrophobic” substance) non-cisgender people, issues, causes, and/or concerns. However, the term, in very specific instances, may be utilized to indicate a presumed fear-based cause to observed anti-trans behaviors.

According to the Encyclopedia Britannica, some of the attributes of fascism are as follows: