The anti-trans movement created a new pathology they’re shopping around to various (mostly right-wing) news outlets. It’s called “rapid onset gender dysphoria” and you catch it from websites like DeviantArt, Tumblr, and Reddit. A great takedown of this internet illness was published by the Advocate and I encourage you to check it out. Having said that, I want to focus on the more obvious, yet overlooked flaws of this concocted condition: it asserts itself to be both “rapid onset” and “gender dysphoria.” Actual gender dysphoria cannot, by the clinical definition of the term be rapid.

Unless you’re prepared to claim that half a year is “rapid,” by the clinical definition of “gender dysphoria,” it cannot be both “rapid” and gender dysphoria. While I’m sure the irony is unintentional, the main vector for “rapid onset gender dysphoria” is an internet site called Transgender Trend. The group recently released a slick looking booklet full of lies and misinformation targeting schools, teachers, and vulnerable families: 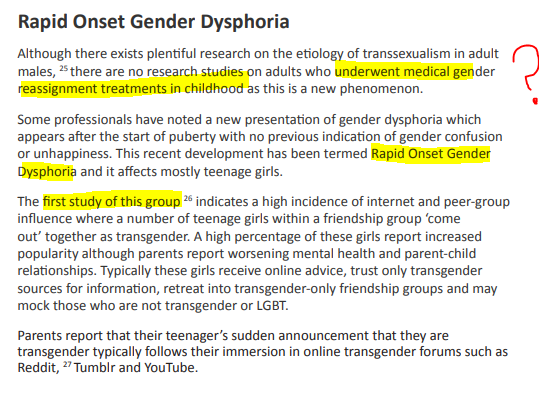 Did you know that there’s a wave of children undergoing “medical gender reassignment treatments”? Neither did I.

The reality is that it’s unethical to give children “medical gender reassignment treatments.” Not only must a child receive a valid DSM-5 gender dysphoria diagnosis to receive clinical care for gender dysphoria, the care provided to children is in the form of psychological support. Even so, for this type of care to be ethical, it must be provided in adherence to the Standards of Care, which bars the types of treatments Transgender Trend claims as being a “new phenomenon.”

Moreover, the “study” Transgender Trend refers to was actually just a mere poster that was hung up at a convention.  The sex essentialists activist who authored the poster asked Transgender Trend comment section commentators and other site supporters if they think cisgender kids are suddenly becoming trans after going to Reddit, YouTube, Tumblr, and DeviantArt. Nevermind the sex essentialists activist “researcher” failed to disclose the source of their data, groups that are sympathetic to the lies Transgender Trend peddles now claims this “study” proves that being trans is something kids catch from the internet.

If this all sounds like you’ve heard this type of rhetoric before, it’s because you have:

The ex-gay movement has, for years, claimed that kids are gay because it makes them popular, that they get attention, and/or they were having difficulty forming an identity. The above story states that the kid in question felt they were, “kind of an outcast, really not social with anybody except one person who was very shy like me.” But then comes along the concept of being gay and suddenly, “they were all supportive, like I was a celeb.” Note how this right-wing narrative is found in the very snake oil anti-trans activists are, at this very moment, working to introduce into schools: 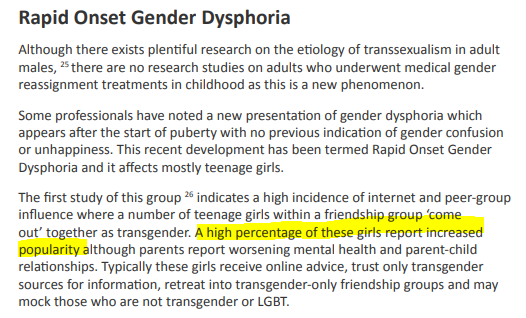 On March 2nd, the TransAdvocate issued an invitation to debate the various lies Transgender Trend pushes and, as expected, for all their rhetoric about “free speech,” the hate group is ducking debating the various lies they’re currently pushing on schools and vulnerable families. It has been…


… since we challenged Transgender Trend to debate the claims they make in their booklet. The hate group refuses to stand behind the hoax they are, even now, attempting to perpetrate, targeting the most vulnerable among us: gender dysphoric school kids. While we know that supporting trans kids produces better mental health outcomes, hate groups like Transgender Trend seem absolutely fine with sacrificing as many children’s wellbeing if it means getting their ex-gay right-wing ripoff of a disease into the hands of non-medical and non-psychological professionals who hold sway over a child’s well-being.