The Many Faces Of Mara Keisling: The Death of United ENDA? 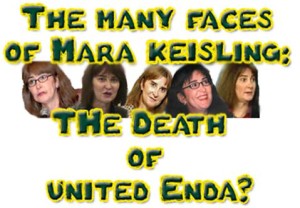 Is one of the key players in the United ENDA movement, Mara Keisling, signaling its death? Recently Keisling said:

‘We have to show Barney Frank 220 votes,’ she said. ‘If we show him 220 votes, nobody is going to work harder on this. The same with HRC… It’s going to happen again next year. ‘- After ENDA, the Fighter’s Resilient

According to Donna Rose’s blog :

3/1/2008 – They’re currently planning to hold hearings in Congress specifically about transgender workplace issues in April. Whereas original plans were to tightly control those hearings, Rep. Frank has largely turned over control of gathering the stories to NCTE/Mara Keisling (who’s home in DC with pneumonia). Mara has been diligently working with many of us to identify potential speakers who can come to Washington DC to speak and I expect she’ll be finalizing that to give to Barney shortly.

3/5/2008 – “…at the request of Mara Keisling, I agreed to meet with her to discuss the hearing. In fact, my office has met with several groups for input, but Ms. Rose’s assertion that I “largely turned over control of gathering the stories to NCTE/Mara Keisling” is wholly baseless. In fact, the Committee on Education and Workforce has jurisdiction over this bill and therefore, the “control” was never mine to turn over. And while the blog referenced NCTE, the fact is, several groups have been working to identify potential witnesses –in fact, the ultimate decision about who is ultimately selected rests with subcommittee Chairman Rob Andrews and full committee Chairman George Miller, after consulting with me.

On a later entry, Rose said:

During our conversation today HRC came up several times. Joe (Racalto,
Barney Frank’s senior policy adviser) went out of his way to assure me that HRC is taking the lead in these hearings in many ways. As far as our community is concerned I’ll take his word for it and let it all unfold….

The Human Rights Campaign (HRC) did an incredibly skillful and professional job as a lead organization on lobbying for the bill.Their work and efforts were absolutely everything that any LGBT person could hope for–they really did ALL LGBT people proud. And they as individuals and as an organization are putting their hearts into transgender work and we should be very appreciative. – (posted to TGv Advocacy)

Our Allies: Years ago, we didn’t have too many. We had to educate and, yes, fight our way back into the LGBT movement. I know there are still imperfections and I know that some trans people are still skeptical. Yet, I can tell you without hesitation that the entire organized LGBT movement is with us now. Our education worked. Our indignation worked. It is our moral responsibility now to embrace the people we asked and demanded to be our allies. If we do not believe in education, in persuasion, in redemption, we have
no right being in civil rights. Why educate if not to win over? Why win over if not to embrace and move forward together? HRC really is an LGBT organization now and getting a lot of great work done for us all. Congressman Frank and Senator Kennedy too. Let’s move on together. – (posted to TGv Advocacy)

Anyone (and again I am not saying you are suggesting this) who would still hope to positively impact ENDA or LLEHCCPA by protesting allies who are really getting the job done for and with us–allies like HRC, Rep. Frank and Sen.Kennedy–in my opinion, simply would not be seeing or else not understanding what is going on. – (posted to TGv Advocacy)


We consider this action a kind of ‘family intervention’. We believe that HRC is misguided in their response and lack of action on the ENDA legislation. While we appreciate the support that HRC has given us in the transgender community, we are disappointed with HRC at the moment, – Transgender Activists Protest HRC Dinner

HRC’s ‘new deal’ is entirely spin meant to undermine the unprecedented grassroots efforts of hundreds of organizations and tens of thousands of individuals in order to allow movement of their vanity bill that no one including Speaker Pelosi or Congressman Frank says they really want. – NCTE’s Daily Update


‘Our official position right now is we are extremely disappointed and angry at HRC. … The real bottom line is right now NCTE will not do anything that will rehabilitate HRC as a legitimate spokesman for transgender people … until they stop actively hurting trans people’, said Keisling. She characterized HRC’s advocacy of the sexual orientation-only version of ENDA in the House, as well as its expected lobbying to pass the bill this year in the Senate, as hurting trans people.

As for NCTE’s future plans for ENDA, Keisling said that after the election she expects advocates to lobby a new Congress and a new president in favor of passing a trans-inclusive ENDA bill.

‘It is our expectation that in 2009 Congress is going to hear from a very united LGBT movement,’ said Keisling. ‘Whether that includes HRC I have no idea.’ – Trans-HRC schism widens

‘We have to show Barney Frank 220 votes,’ she said. ‘If we show him 220 votes, nobody is going to work harder on this. The same with HRC… It’s going to happen again next year.’ – After ENDA, the Fighter’s Resilient

As recent as yesterday, HRC was lobbying for a non-inclusive ENDA.
In an email from Cuc Vu to the HRC Steering Committee, she writes:

Lobby ask:continue to build support in the House for HR 2015; request the Senate to take action to prohibit workplace discrimination.

Since the non-inclusive bill (3685) has already passed the House, asking the Senate to take action to prohibit workplace discrimination is asking them to support 3685. Essentially it’s business as usual for HRC. Nothing has substantially changed in their lobbying efforts. They’ve had no “rehabilitative” moment or change of heart. If you take Keisling’s words to heart, the only other conclusion that seems logical is that United ENDA is dead.

“I was sitting in my basement. I just rolled myself a taste Of something green and gold and glorious To get me through the day.” — I Got Stoned And I Missed It, Shel Silverstein “"I have always loved marijuana.…
Read
Previous Post

“We need a revolution for the people – for the poor, for who have nothing! The politicians and the rich, they’ve already got it all! What do they need?” — Stonewall veteran, Sylvia Rivera at the 2001 NTAC Board meeting…
Read
Random Post

A Big Win in the USA: Stating the bleedin' obvious

By Zoe Brain   NCD 140.3, Transsexual Surgery Docket No. A-13-47 NCD Ruling No. 2 December 2, 2013 BOARD RULING THAT NCD RECORD IS NOT COMPLETE AND ADEQUATE TO SUPPORT THE VALIDITY OF THE NCD The aggrieved party also argues…
Read
Random Post

Reparative Therapy for Trans Youth: Kenneth Zucker is Different from George Rekers How?

Watching this recent CNN story on reparative therapy and the damage it did to George Reker's poster child (Kirk Andrew Murphy), I was struck by the similarity of this story and a child that NPR covered about childhood gender identity…
Read
Random Post

Come to Think of it, I've Never Seen Morgan Meneses-Sheets and Cathy Brennan in the Same Room at the Same Time

Good news: The person that Free State Just Us was trying to turn into a Trans Jemima for the nefarious purpose of creating a public perception of having an understanding of the reality of trans people's lives, has realized that…
Read