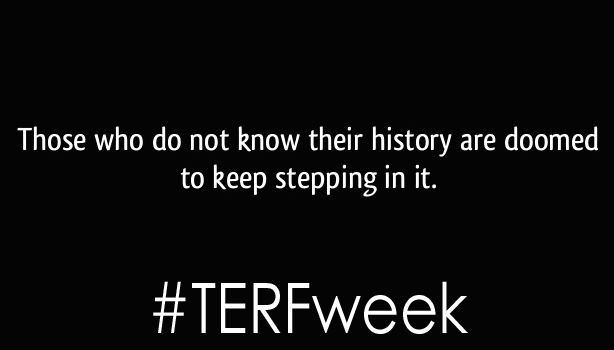 The following article was published in 1974. Note the way the overall public held anti-trans views in contempt. Note the dismissive way the author of this article reported on TERF bigotry. I think this article serves as an important cautionary tale because I can’t help but note that today, like in this 1974 article, some feminists and trans folk seem to think TERF anti-trans dogma is irrelevant.

Please never forget the damage they’ve caused. They are as hubris as they are cruel; TERFs have repeatedly shown that they take perverse pleasure in increasing the level of suffering within the trans population.  The harm TERFs went on to inflict upon the trans community after this article was published is arguably without parallel.

At a recent feminist conference, drag queen Bebe J. Scarpie successfully was able to infiltrate the question line, from which men were excluded, in order to challenge Jill Johnston, the radicalesbian columnist. Miss Johnston, is primarily noted for a recent letter to the National Organization of Women, in which she proposed that mothers neglect to care for male babies. She also attacked drag actress Holly Woodlawn, when the latter was making a public appearance. At this conference she wanted to allow only those males necessary for artificial insemination to exist. Bebe accused Jill of being a Neo-fascist and dictating to women as well as men. At this point however, a radicalesbian recognized her from previous encounters, and screamed out, “Jill don’t answer, it’s a male question.” The audience, composed 50% of college students and 50% of Jill’s entourage, was left in total amazement. It was interesting since with their close cropped hair and full denim outfits, the radical women were more transvestites than Bebe!

Finally one of the straight women present picked up Behe’s line of questioning. Jill again demonstrated an inability to build any logic sequence of thoughts and she succeeded in boring half the college students into leaving while she was trying to explain that sleeping with a male made a woman a male, to which this straight sister replied then it made her boyfriend a woman.

It was overheard by one of Babe’s friends that the radical panel had muttered that they couldn’t believe this was happening to them. Drag Power!

Some who may not be aware of the painful history that the TERF movement has inspired might be tempted to, as we’ve done in the past, think that TERFs are simply an irrelevant group of logically-incoherent trolls. They, like the author of this 1974 article, might find comfort in believing that this fundamentalist group won’t be able to do anything to actually affect the lives of real people.

It was a denial-based indifference that allowed the TERF movement to harm so many in the past and it is my hope that over the course of #TERFweek, some of the denial the TERF movement needs to ensure that TERF ideology can be unquestioningly promoted within academia and media outlets might be dispelled.

The nuances of language have come a long way since 1974. The different and nuanced ways of understanding trans identities were only just beginning to be discussed within the trans community itself. Additionally, in 1974 and the TERF colonization of the RadFem identity had already begun. This was only a year after a Radical Feminist was beaten by TERFs for attempting to protect the physical safety of a trans woman at the 1973 West Coast Lesbian Conference. It wasn’t until 2008 that the feminist community created the term “TERF” as a means of distinguishing between a a movement hyper-focused on oppressing trans people and the actual feminist/Radical Feminist movement.