I recently posted “Transphobic Radical Hate Didn’t Start With Brennan: The Sandy Stone-Olivia Records Controversy” to point to the past of anti-trans radical feminist bigotry. Pointing out the past is important in building a unified future.

You can’t simply ignore people inside the “LGBT” community who foster hatred and fear against you. There are lesbian radical feminists in the community that wish to “challenge the practice of transgenderism“. I don’t wish to silence dialogue, but there’s a certain line of what is acceptable to discuss in public. Gay rights icon, Bayard Rustin said:

“Our job is not to get those people who dislike us to love us. Nor was our aim in the civil rights movement to get prejudiced white people to love us. Our aim was to try to create the kind of America, legislatively, morally, and psychologically, such that even though some whites continued to hate us, they could not openly manifest that hate.”

You won’t hear anyone with any shred of credibility inside the community talk about reparative therapy as a debate topic. In fact you’ll hear the community shout practically in unison that such talk is an attack on the community. But there are folks within the lesbian community that have a history of supporting lesbian separatism.

According to Mass Equality and NGLTF’s website, Sue Hyde is:

“She is a seasoned community organizer and advocate whose issue portfolio at the National Gay and Lesbian Task Force has included repeal of sodomy laws, rescission of the military’s ban on openly gay, lesbian and bisexual service members, passage of local and state civil rights laws, training leaders to effectively oppose right-wing incursions in their communities, directing the annual Creating Change Conference, and securing marriage equality for same-sex couples.”

But before she was the “seasoned community organizer” she is now, she was a lesbian separatist. In an interview with Smith College in 2008 she said of her separatist past:

“…my lover and I, uh, launched a production company called Red Tomato. Uh, that from 1974 to 1982 produced cultural events, uh, for women and lesbians in St. Louis, um, most of it was musical. Um, there were- at the time there was- there was a very lively, um, circuit of small-relatively small production companies, producing relatively small events for, um, women musicians, all of whom were lesbians. Um, and we became a part of the women’s music circuit that thrived through the 70s and, you know, up to the mid-80s I would say. Um, so Red Tomato produced forty-two different cultural events in St. Louis, 74 to 82, um the largest- the largest event we produced garnered an audience of about a thousand people, ”most of them were much smaller, somewhere between, um, 75 and a couple of hundred- couple of hundred people in the audience.”

“These cultural events were really- were created by us, um, for a couple of different reasons. One is that we ourselves wanted to hear the music. There was, um, a small and uh, you know, important recording company at the time, Olivia Records, they produced vinyl record albums of these artists, and, um, and we were able to get the records, but we really also wanted to experience- um, experience the performers live and in person. So we ourselves had a very great hunger to bring these women to our community. But we also recognized that, by organizing these cultural events, that we were building community among women, and among particularly lesbians.”

So before Hyde was a community activist, she was a essentially a promoter of women’s music events and a self avowed lesbian separatist.  It would also appear that Hyde was one of the signers of the “Letter to Olivia” piece: 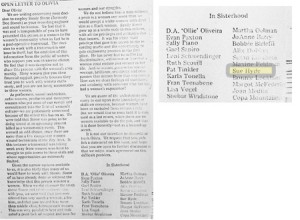 “Well, um, I very much appreciated and valued women’s- women-only social space, and felt that, for many reasons, women and lesbian women needed to be able to, um, relate to each other in a space un- unaffected by men, and what men tend to bring into, um, an environment that is primarily defined by women. Politically, I, um, when it came to political action, for example when it came to fighting for the continued access of women to abortion and reproductive choice, um, I did not find separatism to be particularly useful or productive. I wanted men to be involved in that, and then as a gay and lesbian, bi and trans community and movement, um, began to take shape in St. Louis I encountered many gay men in particular with whom I worked and wanted to be working, um and- and really when I started to become involved in queer politics in about 1979, 1980 that’s when I pretty much let go of- of lesbian separatism as a as a political principle.”

In a time when the transgender community is being attacked and their human rights being called into question, our community leaders need to provide leadership. While Hyde may have given up lesbian separatism as a “political principle“, having a history of advocating for the firing/not hiring a trans woman is something that needs addressed. We need to know that the leaders stand with us in our fight for equality. Either that or they need to stop calling themselves “LGBT” activists/leaders/organizations. Being out front is what leadership is all about. This isn’t about theory, it effects trans people’s lives and how trans people are to be viewed and protected. If Sue Hyde has given up lesbian separatism as a vehicle to deny trans people rights, she needs to say so. Loudly. There isn’t a better time than now.

(NGLTF, Mass Equality, and Sue Hyde were contacted for comment, but as of yet have not responded to that request.)

I've had the honor of speaking at many types of events.   They range from Trans 101 panels to speaking about trans issues from an African American perspective in college classes to testifying in front of governmental committees on behalf…
Read
Previous Post

When Cathy Brennan recently published her transphobic missive to the UN at radfem Hub, it reminded me of a similar kind of radical feminist transphobic screeds from the past. In 1977 Sandy Stone was the focus of a controversy concerning…
Read
Random Post

Fear & Loathing Between My Legs, Pt. 2

Obamacare Vagina: Medicaid Coverage of SRS, Part Two By Rani Baker @destroyed4com4t At the buttcrack of dawn one morning in late August 2016, I arranged a ride with Uber. I dressed up in some loose-fitting but comfortable clothes and took out…
Read
Random Post

From Pride At Work

From the wonderful folks at Pride At Work: Poll after poll show working families view health care as one of the most important issues facing our country today. But we know these polls only tell part of the story. We…
Read
Random Post

The podcast crew reviews national and local politics and discusses some of the nuances of community, transition, and detransition. Also featured: the first installment of Gwen Smith’s Gender Nation and bonus material. On the Pod: Cristan Williams, Robin Mack, and…
Read