GLAAD condemned the false report by the Pacific Justice Institute (PJI) which claimed a transgender kid was harassing cisgender girls in Colorado. PJI is the ex-gay/creationist organization at the center of an international effort to malign one transgender kid. Last week, the PJI provided the right-wing word with the ultimate talking point against protecting trans children when they claimed that a trans kid in Colorado, assisted by the public school system, harassed cisgender girls in the restrooms. Right wing media outlets jumped at the story without fact checking and inspired members of the right wing community to call for the death of the trans kid.

PJI is perhaps best known for claiming that overturning DOMA would lead to incest:

Just as the PJI story was gaining a foothold in international right wing and tabloid circles, the school’s Superintendent debunked PJI’s unsupported assertions of harassment and revealed that the media hype was instigated by one parent who objected to a trans kid being around cisgender kids. Furthermore, PJI issued a statement to the TransAdvocate yesterday clarifying the nature of the harassment. In the statement,  PJI asserted the mere presence of a trans person was “inherently intimidating and harassing.”

In August 2013, PJI set forth their belief that laws protecting trans kids would lead naked boys, assisted by the state, taking showers with naked girls: 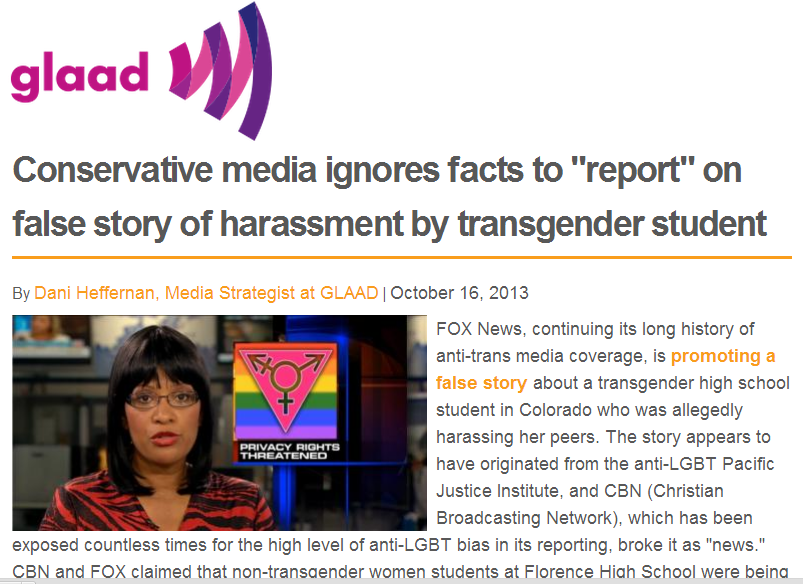 GLAAD quoted Florence High School Superintendent Rhonda Vendetti, saying, “We do have a transgender student at the high school, and she has been using the women’s restrooms. There has not been a situation. All the students of these parents who say they feel uncomfortable just about the fact that the student is allowed to go into the restrooms at the high school, into the stalls – they don’t believe that that’s appropriate, so that’s where it stems from. There has not been an incident of harassment, or anything that would cause any additional concern.”

In light of the facts, GLAAD condemned Fox News for their failure to correct the PJI story they’re currently running. Undeterred by facts, Fox News continues to promote PJI’s hyperbole:

Like the PJI, Fox News has made it clear that protecting trans children will lead to numerous state-sponsored X-rated scenes involving children on school property:

PJI tipped their hand to their true purpose in targeting the Colorado trans kid in the last paragraph of the press release:

GLAAD asked that people take action and “tell FOX News to stop promoting this false story.” The LGBT rights organization asked that you tweet Fox News @FOXNews telling them to “check your facts and stop promoting the false story of a Colorado transgender high school student.” In their statement to the TransAdvocate, PJI voiced their hope that journalists cease retracting PJI’s stories.

Today, HRC has joined GLAAD in condemning the false reports of trans harassment by an ex-gay/creationist group, the Pacific Justice Institute (PJI). The PJI is the organization at the center of an international effort to malign one transgender kid. Last week, the PJI issued the right-wing community talking points for use in…
Read
Previous Post

Okay. Maybe the Pacific Justice Institute (PJI) doesn't think that they're admitted their charge of "harassment" is fake, but I'll let you be the judge. The PJI is a right-wing activist organization and huge supporter of the ex-gay movement as…
Read
Random Post

Of expectations and education

I recently posted the following to my FaceBook page: Is it me or is there a lot of "JESUS! STFU already! I'm complementing you and think you should have rights! What, now I have to stop asking about your genitals…
Read
Random Post

A press release from transsexualities.com: Transwoman removed from female washroom by security and subjected to transphobic slurs for using “wrong bathroom” KELOWNA, BC - On Sunday, October 26th, at approximately 2AM, a transwoman was dragged out of the women’s washroom…
Read
Random Post

Transwomen Are Fighting A Two-Front 'War On Women'.

Much attention has been focused on the 'War on Women', the anti-woman political policies the conservative movement and Republican politicians have been pushing for years and implementing once they gain political control of state legislatures. And yes, being that we…
Read
Random Post