The Pacific Justice Institute (PJI) is the ex-gay organization that stirred up the right-wing word by claiming that a trans kid (who I will refer to as Jane Doe, for reasons of safety) in Colorado was harassing cisgender girls in the restrooms. Right wing media outlets jumped at the story without conducting any fact checking, prompting members of the right wing community to call for the death of the trans kid.

Transgender activists are largely dismissing this story, claiming the girls are likely either trying to get the male student in trouble because they don’t like him or concocting stories of harassment because of opposition to the policy. McReynolds is not buying the argument that this is much ado about nothing.

“If there were nothing to this, I don’t think the school district would be currently conducting a law enforcement investigation, which is what they’re doing,” he said. “Beyond that, you’ve got to ask yourself, when you have somebody who is acting very peculiarly to say the least, sometimes dressing as a girl and sometimes dressing as a boy, why are we indulging that and making everybody else pretend like that is normal, when clearly it’s not?”

The speed with which issues like this have emerged throughout our culture even surprises McReynolds, but he said the warnings against enabling this movement are already coming true.

McReynolds made this statement to support his bogus claim that Jane Doe is a predator. 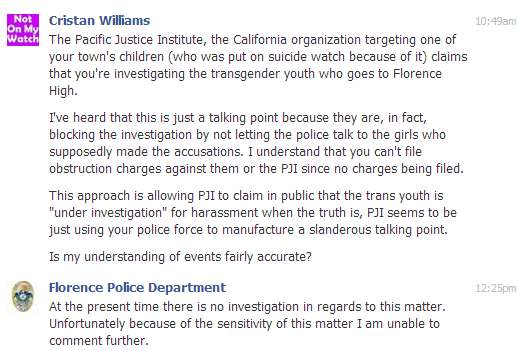 At the present time there is no investigation in regards to this matter.  – Florence Police Department