The British Transphobic Feminist Troika unleashed their hate speech upon the world last week probably thinking they would get pushback from the trans community they and their acolytes could spin and demonize them with until it quickly blow over.

This time it isn’t just our British trans cousins who are pissed off about the transphobic scribblings.   They got reinforcements from various trans bloggers around the world and pushback from the surprising direction offeminists, allies and other justice minded folks tired of the radfem transphobia making them, their nation and their movement look bad.

All I can say is thanks and what took y’all so long?

It also leads me to ask this question concerning the international kerfluffle that has been stirred up on the Net by the Transphobic Feminist Troika.   Is this a tipping point sign that like the trans community, feminists are also tired of the transhate speech that has been said in their names for over 40 years?

We transpeeps can only hope that’s exactly what is happening, but only time will tell in that regard.  We still have radfems on this side of the Pond who revel in spouting hate speech on a regular basis

Are we going to see this year and from now on serious efforts to root out the cancer of transphobia in feminism, or is feminism just going to go back to business as usual, decry it in private and allow the radical feminists around the world to continue pushing trans hatred in their name? 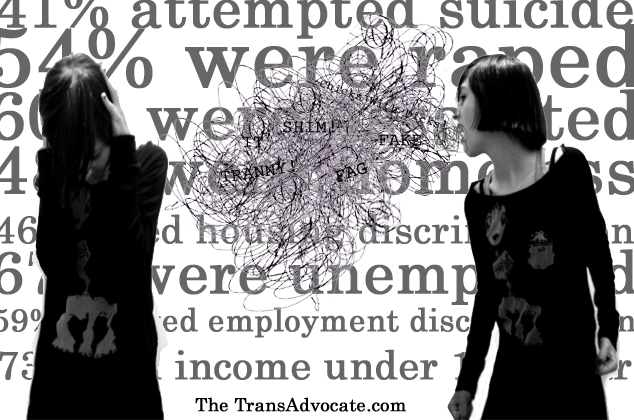 In categories:Best of TA Monica Roberts Opinion
Tags:feminism hate in the media transphobia
Next Post

The problem is that the very imagery of what she’s referring to is so weird that I honestly can’t tell precisely what its a threat of. Guardian columnist Suzanne Moore has launched an outspoken attack on PinkNews after it published a story about…
Read
Previous Post

The Observer Screws Up

There are things one does not do in a national newspaper. One does not call Blacks "uppity ni**ers". One does not state as fact that Yids drink the blood of Christian children. And one does not publish articles like this one.…
Read
Random Post

Monica's troubles began one night after protesting Arizona’s failed religious anti-LGBT legislation while walking to a bar. An undercover officer engaged her in a conversation which led to her being charged with "manifesting prostitution”, AKA walking while trans. Since Jones…
Read
Random Post

On one of the trans Facebook groups I monitor a post was put up about the gruesome murder of transman  Evon 'Yung LT' Young.  One person remarked in the comment thread under the post that's why she never leaves her home,…
Read
Random Post

History will have to record that the greatest tragedy of this period of social transition was not the strident clamor of the bad people, but the appalling silence of the good people. ~Martin Luther King, Jr. During the civil rights…
Read
Random Post

“Is the Happy Meal for a boy or a girl?” I had no idea that McDonald’s Happy Meals were gendered, but then I’ve never ordered one before this week. I’ve been suffering from a nasty bronchial thing, which I thought…
Read