The problem is that the very imagery of what she’s referring to is so weird that I honestly can’t tell precisely what its a threat of.

Guardian columnist Suzanne Moore has launched an outspoken attack on PinkNews after it published a story about the killing of a trans woman in Brazil.

Linking to Wednesday’s story, Moore tweeted from her account @suzanne_moore

I am back to sort this out and to play some music and cos I miss many good laughs and people that are here btw.”

@mjrharris no libel threats. I will just turn their balls in Tesco Value Burgers.

Thanks for support. I am trouble again already about Pink News joke – I dont have lawyers FFS but they are c*ntards

In response, PinkNews editor Scott Roberts, who wrote the story said: “I referred to Suzanne Moore in yesterday’s article about the killing of Cecilia Marahouse because her death should be viewed in the context of the media row, which Ms Moore found herself engulfed in last week, and continues to burn at this very moment due to the remarks of some of her colleagues at the Guardian and Observer. It all stemmed from Ms Moore’s use of the word ‘Brazilian transexual’.

Seriously, is she saying she’ll turn their balls INTO burgers (presumably via meatgrinder)?  Or just that she’ll roll their balls around in hamburger meat (which, well…, whatever floats your boat – but I think I have the right to offer my opinion that, personally, I think that’s kinda weird, even as a threat to make)?

Nevertheless, lets err on the side of safety, eh?

She was threatening violence!

She was threatening meatgrinding violence to the same degree that a certain person from Kentucky was threatening violence against a certain transexterminationist via baseball bat and Buick back in 2011 (and, even assuming the latter interpretation of Moore’s threat, if its done without consent, I’m pretty sure that rolling someone’s testicles around in hamburger meat would still be, in pure criminal law terms, at least assault/battery and possibly some degree of sexual assault, depending on the jurisdiction.)

Will the transexterminationists now call out one of their neo-fake-martyrs?

I’m not going to hold my breath – as that would be inflicting violence on myself.

Interesting observation coming from someone whose poorly-written column about an otherwise relevant topc – the subsequent ill-advised and ahistorical defense thereof which revealed her to be not just tone-deaf but also rather unhinged – are the only interesting things about her. 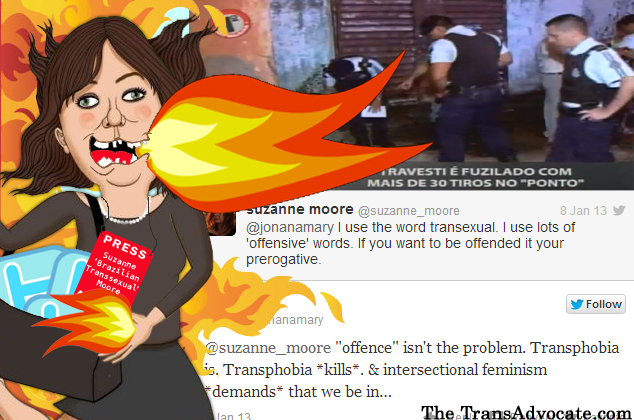