The Observer Screws Up

There are things one does not do in a national newspaper. One does not call Blacks “uppity ni**ers”. One does not state as fact that Yids drink the blood of Christian children. And one does not publish articles like this one. Starting with a quote illustrating a complete lack of anything redolent of white feminist privilege

“Sod that, we’re having lobster and champagne at Frederick’s and I’m paying,” I told her. Half a bottle of Bolly later, she looked at me with faraway eyes: “Ooo, I could get to like this…” And so she did.

I nevertheless felt indignant that a woman of such style and substance should be driven from her chosen mode of time-wasting by a bunch of dicks in chicks’ clothing. To my mind – I have given cool-headed consideration to the matter – a gaggle of transsexuals telling Suzanne Moore how to write looks a lot like how I’d imagine the Black and White Minstrels telling Usain Bolt how to run would look. That rude and ridic.

The reaction of the trans lobby reminded me very much of those wretched inner-city kids who shoot another inner-city kid dead in a fast-food shop for not showing them enough “respect”.

But they’d rather argue over semantics. To be fair, after having one’s nuts taken off (see what I did there?) by endless decades in academia, it’s all most of them are fit to do. Educated beyond all common sense and honesty, it was a hoot to see the screaming mimis accuse Suze of white feminist privilege…

She, the other JB and I are part of the minority of women of working-class origin to make it in what used to be called Fleet Street and I think this partly contributes to the stand-off with the trannies. (I know that’s a wrong word, but having recently discovered that their lot describe born women as ‘Cis’ – sounds like syph, cyst, cistern; all nasty stuff – they’re lucky I’m not calling them shemales. Or shims.) We know that everything we have we got for ourselves. We have no family money, no safety net. And we are damned if we are going to be accused of being privileged by a bunch of bed-wetters in bad wigs.

Shims, shemales, whatever you’re calling yourselves these days – don’t threaten or bully us lowly natural-born women, I warn you.

[highlight]… they’re lucky I’m not calling them shemales. Or shims.[/highlight]

Mighty White of her to do that. Mighty White. Especially since she …may not have as many lovely big swinging Phds as you

The Guardian group has certain ethical standards. So does the UK National Union of Journalists. There are also laws in the UK against deliberate and malicious denigration of minorities.

UPDATE: The original article has been deleted – along with the 2500 comments , mostly eviscerating it. It’s now available on numerous mirrors – such as the UK Telegraph http://blogs.telegraph.co.uk/news/tobyyoung/100198116/here-is-julie-burchills-censored-observer-article/ 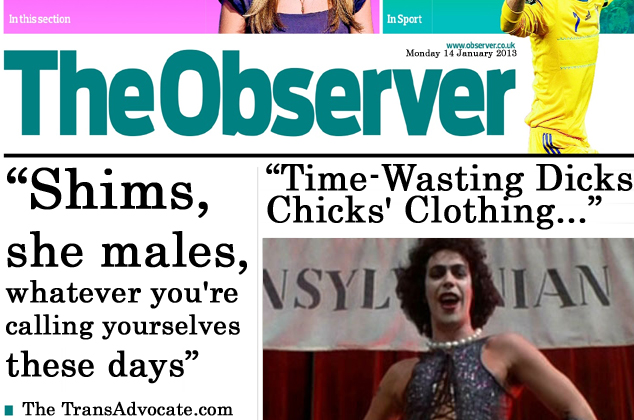 In categories:Best of TA Opinion Zoe Brain
Tags:hate in the media transphobia
Next Post

The British Transphobic Feminist Troika unleashed their hate speech upon the world last week probably thinking they would get pushback from the trans community they and their acolytes could spin and demonize them with until it quickly blow over. Not this time.…
Read
Previous Post

After all, the Julie Birch Ill Society probably just cheers whenever a transsexual woman gets ‘cut out.’ From Pink News: It’s being reported that a transwoman has been shot dead in Brazil. According to the ‘Guerrilla Angel Report’ blog site, it is claimed the victim, named…
Read
Random Post

The Ghost of Chris Crain: Gayjacking the Hate Crimes Bill

When Chris Crain left his position at Window Media, I thought the voice of "transjack" was dead. I couldn't have been more wrong. Today the Washington Blade published an op-ed by a long time Democratic gay activist and Washington D.C.…
Read
Random Post

What it is #TERFweek is a week of education, raising awareness and openly talking about the abuse our communities have endured at the hands of the Trans Exclusionary Radical Feminist movement. From Monday, August 11 to the 17, we invite everyone to share their…
Read
Random Post