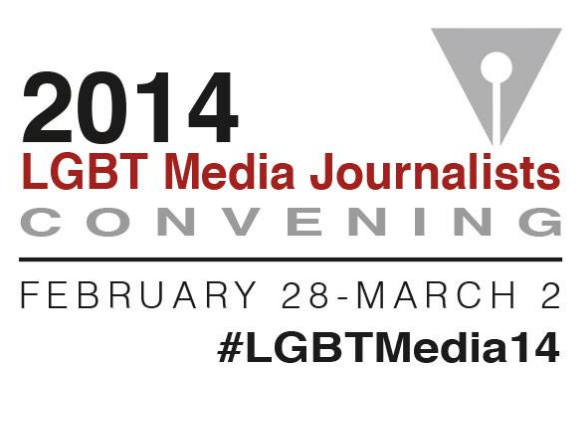 A few days ago, I posted excitedly about going to Washington DC to attend the 2014 LGBT Media convening and the very real possibility of seeing the president. Well, my train was behind schedule, so I missed Bo by 15 minutes but the real frustration hadn’t even begun.  Looking at the agenda early in the day I saw three panels where I could air my concerns about Jared Leto’s role in the Dallas Buyers Club, the reason I had decided to attend. 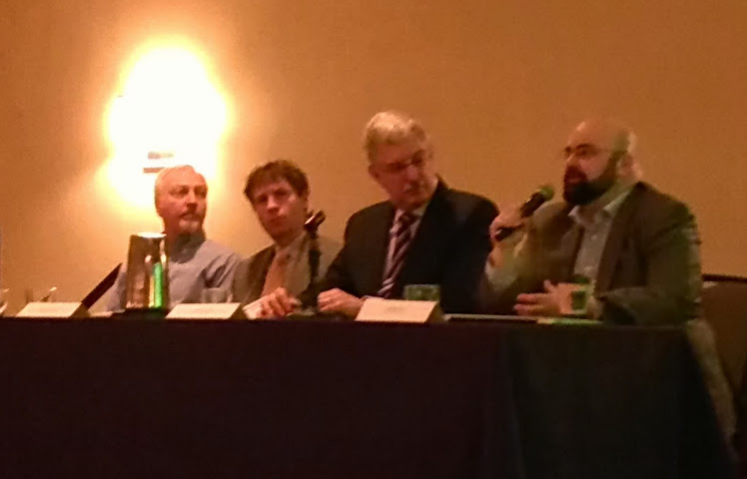 I really tried to get recognized waving my hand to indicate I had input to be considered. However, Matt Foreman moderating the first panel “Understanding and deconstructing the attack lines of the anti LGBT industry” looked past me as if I didn’t exist. I finally got his attention, but he just grimaced and looked away.

I wasn’t the only one to notice this. Someone commented later about it but I shrugged it off. The convening had just begun and I had all day to speak up.

Second panel: “What we don’t talk about: Radical methods for greater diversity in Queer Journalism.” 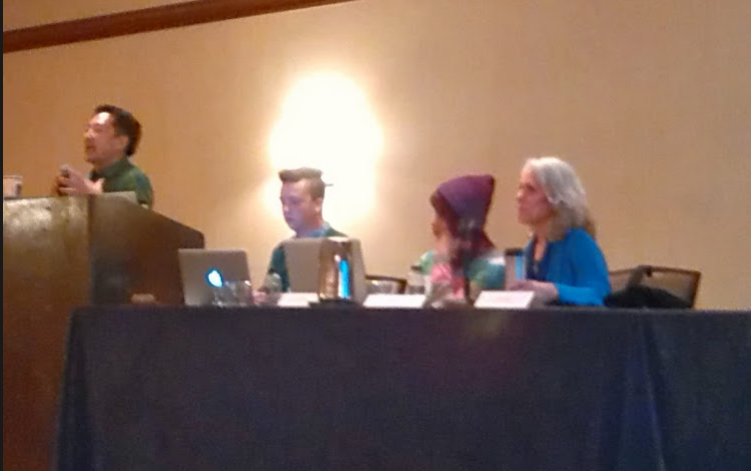 I tried to get the moderator’s attention during the Q and A, this time waving my hand a little more vigorously. I had something I really wanted to say, and this panel needed to hear it. Moreover, the journalists in attendance needed to hear what I had to say. However, moderator Erin Rock just ignored my gestures. 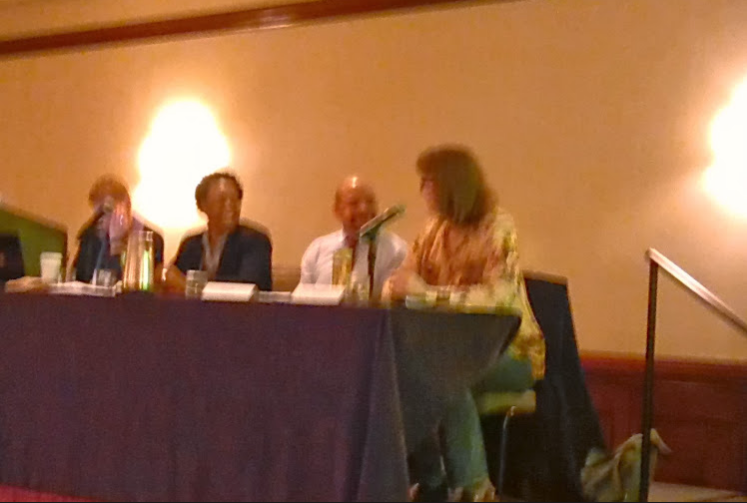 This time, frustrated I raised my hand as soon as the moderator Sara Blazucki began inviting questions. Blazucki wouldn’t even look in my direction even as I was ferociously waving both arms in the air. As she began to close the final panel, I shouted “I HAVE SOMETHING TO SAY.” I knew in my heart if she didn’t call on me I was going to stand in front of the panel and have my say anyway. If they were that determined to shut me down completely they would have had to do it with law enforcement.

Looking at me in exasperation she invited me to speak. I made a comment on how GLAAD was giving  “Dallas Buyers Club”  a free pass on its inaccuracies regarding the history of HIV/AIDS and talked briefly about it’s transphobic content, hoping others would become engaged in the conversation.

Now totally exasperated at this fucking tranny who had the audacity to demand equal time she inquired condescendingly ‘Well, what’s your point? Do you have something to say? Do you have a question”? Then totally frustrated she stated “Well, we’re not going to talk about that here”.

Bad move ace. We sure as fuck were going to talk about it.

So I turned around and looked at all of my fellow LGB bloggers and journalists. I asked them why they had been silent about the problematic content of that movie.

Why did it take Steve Friess who wasn’t even in the room to begin the conversation with “Don’t Applaud Jared Leto’s Transgender ‘Mammy” ?

Then looking directly at the ones who had written articles praising “Dallas Buyers Club” I asked them why had done this. I asked if they understood that they were stomping on the graves of our fallen. Did they understand they were digging holes for transgender people with HIV/AIDS?

Not one person would look up. Not one. The ones who were looking in my general direction averted their eyes as I glanced at them

Yeah have a nice fucking day.

In all honesty I don’t know why I was censored at the 2014 gathering of ‘the top 70 LGBT journalists’. I am known for my outspoken unabashed criticism of gay media. I am transgender. Maybe it was one or both of those reasons or perhaps a conspiracy. So much of the convening was spent talking about trans and queer related issues, I just don’t know.

What will they talk about at the LGBT Journalist Convening in the future? They will talk about understanding and deconstructing the attack lines of the anti LGBT industry, radical methods for greater diversity in Queer Journalism and Airing our dirty laundry: Best practices in writing about touchy subjects. They will talk about a lot of great topics just as long as the question and comments don’t come from the fucking tranny kelli Busey.

It was preordained that Leto would get an academy award and he did later in the day. The transgender community was outraged by Leto’s award and felt disempowered by the academy and the majority of gay media’s ignoring oor concerns. The reaction on twitter was fast and furious. 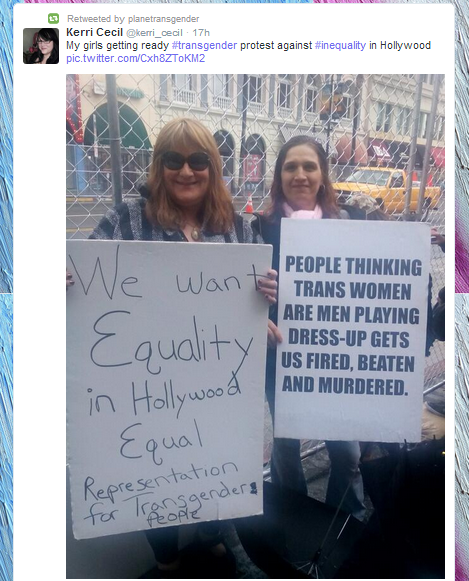 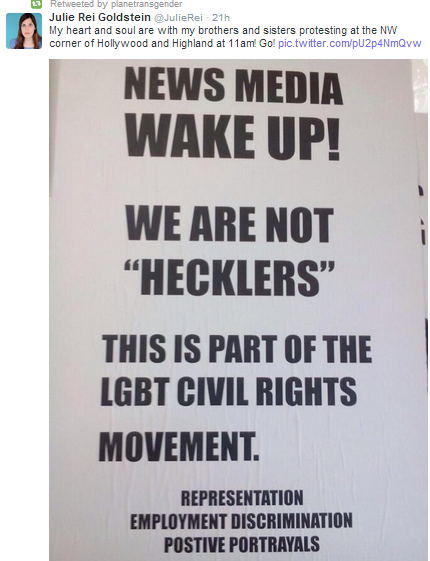 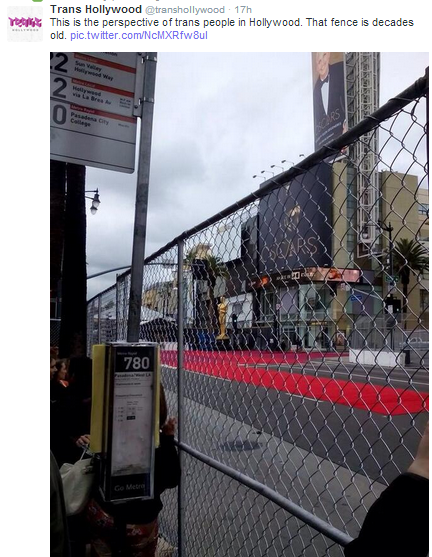 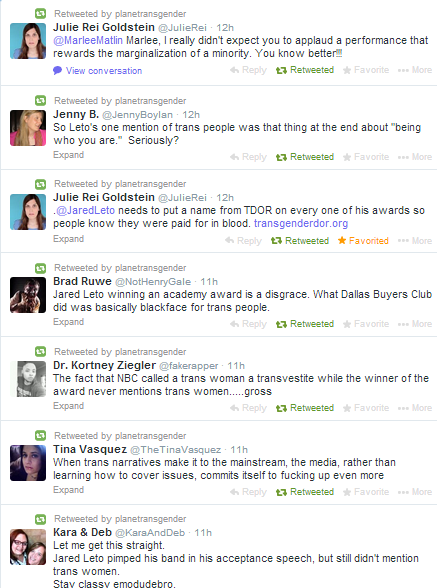 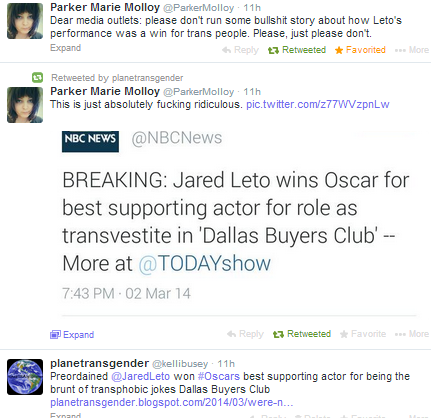