“He who accepts evil without protesting against it is really cooperating with it.” — Martin Luther King Jr.

Well it didn’t take long for responses to my last blog. One person wrote me privately saying she was disappointed I didn’t “understand” how “serious” the Pam’s House Blend controversy was and that I should’ve “come down harder” on her and Autumn Sandeen for these bannings or muzzlings they enacted on their trans “members and bloggers.” Then on my posting I had a response from another suggesting I sit down with Mara and patch up philosophical differences, noting she was “not a card carrying member” of either of our organizations … preferring to contribute to NGLTF because “they promote trans-inclusion.”

Two completely different perspectives saying roughly the same thing: we need to make things work in gay and lesbian organizations or functions for us in order to make gay and lesbian led-groups succeed. Talk about your WTF moments! Perhaps my point in the previous blog wasn’t clear enough. 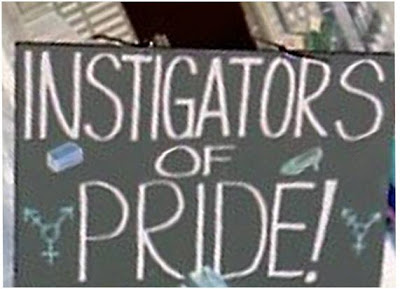 Let me restate that point: we need our voice and for that matter autonomy, respect, experience, and control of our own destiny without shackles or limitations placed on us just as they need theirs. They have theirs already. Where do you see ours in any similar measure? It doesn’t happen within GLBT. And outside GLBT we get a little awareness, but most of our own seems more than happy to build up the very gay and lesbian institutions while leaving the trans ones in neglect! 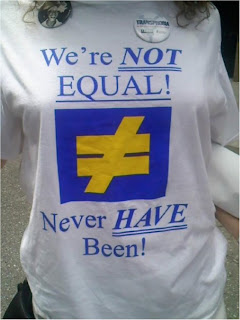 How do I need to rephrase this in order for our own community to understand? Maybe I do suffer from the communication disability that the G&L leaders so famously peg on us all. Lord knows trans people can’t articulate our own issues, but let me know what I need to do to get this out and I’ll struggle my way through it!

In 2000, during a visit at the Human Rights Campaign (HRC) with Michael Gray and Alex Fox, I’d expressed how I personally didn’t have a problem with them leaving the T out of their mission statement and their work. Yes, I meant every word of it. HRC was – is – the voice of the gay and lesbian community and Trans wasn’t their forte. We in the T community needed our own voice, and needed it expressed from our perspective just as they needed and had theirs.

In the next two years, they first amended their mission, then worked with a new upstart individual to create another Trans organization that would supplant NTAC and its independent voice. This new group would help them by humiliating those of us who weren’t working “with our (so-called) allies,” and isolating those of us trans people who apparently weren’t our own allies for wanting to speak to our own issues. It was better addressed by the “allies” as their “professionals” and by this logic knew our own issues and could address them better than we did. HRC was “the 800 lb. gorilla in the room … (that) must be dealt with.”

Even after the new group moved away from being such fans of HRC, they still had to be friends with them as they “had to work in the same space.” 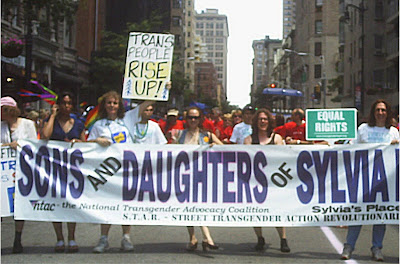 That latter sentiment is pure BS. None of these so-called allies is required to “work in the same space” as NTAC or other Trans organizations kept out of the mainstream of the entitled Queer movement. None of them have ever gone through “proper channels” on anything with us, not even any of the newer Trans organizations now or in the future. Why lend credibility to any of that? 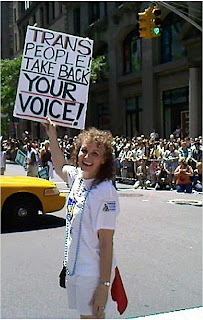 Gay and Lesbian America are quite well established and are perfectly positioned for, and awash in successful ventures. They even have us (with our limited resources) giving them a hand to build up theirs.

Now take a look at Trans America and our own ventures. Where in the hell do you see anything of theirs reciprocated back to us in whatever configuration? There is no similar effort to build our functions nor any dollar-for-dollar return on funding, much much much less anything commensurate (considering the size of their community comparative to our small and quite limited cumulative income levels between our two communities).

And after so many years of demonstrated history, noticing the all-too-obvious patterns, we trans people are insistent upon building up gay and lesbian institutions for what again? Their outspoken leaders are ballyhooed and given prominence. Our outspoken leaders are shamed into silence – and they even enlist some of our own to assist in doing so!

It’s been clear to many of us for most of this decade that there’s nothing in this “LGBT movement” for Trans folk. We’re appends that they begrudge but tolerate as they must appear politically correct. So these leaders do enough for appearance’s sake, manage us best as they can and seek out ways to make it pay for itself.

Their leaders are heroes. Our leaders are zeroes – mere trash to be tossed. Not much unlike how Sylvia Rivera and Marsha P. Johnson were considered back in their day, as only in death were they fondly remembered. We’re every bit as useful and wanted to them as sand off the beach tracked into their shiny vehicles.

Make no mistake: Sylvia and many of the trans leaders and rioters of those days despise the movement for its hypocrisy and hard-heartedness. And though we must recapture our own voice, our outspoken leadership are and will continue to be as welcomed and as necessary as sand tracked into their vehicle after coming in off of the beach.

As Barney Frank, the Big Gay Man On The Hill, has noted so many times: they don’t know who [trans] are. And as it’s always a Barney, or a Joe Solmonese or a Matt Foreman or a Rea Carey or a GLAAD or someone similar who’s always our prominent face to the rest of the world in politics, media and representation, that’s who America will always believe we are.

And yes, in case you haven’t noticed, they’re all gay or lesbian. And yes, if that’s who some of you trans folks wish to build up and promote, then I don’t want to hear a word when we get ditched (due to insufficient education on Trans) and subsequently assumed and developed as a future cottage industry for these very same folks to continue validating themselves while continuing to keep us at bay and voiceless. Look around your NGLTF: how many trans people have they hired onto their staff historically? How many in any of these groups were leaders or highly visible throughout the years? If you can’t answer those questions, then you haven’t been paying attention anyway.

“All people saw on television were a few of my outspoken supporters out front; and they came away thinking that was me.” — Sen. George McGovern about his presidential campaign in 1972 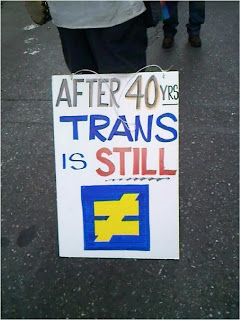 Ten years ago, I was one of the so-called “moderate voices of reason.” My goal was to try to get us to some understanding of the needs of both sides and get these established groups to understand us as equals and to forge actual egalitarian ideals in our pursuit of rights as painlessly as possible. For my troubles, I ended up being written off as a radical protester and an enemy to be isolated and buried a few years hence. Yes I was naive and paid a price most severe.

Well, I’m not buried any more, and am in no mind to play “compromising” games that again rip our voices away from us. Giving up your right to voice your displeasure is and absolute zero sum game. You get less than nothing: helping them make their job easier is your only result.

Meanwhile, the State of Massachusetts announced today that they are suing the federal government over same-sex marriage and DOMA’s infringement over the their state law per federalism. Meanwhile, trans people in that same state still have no hate crimes protection, no employment non discrimination and few if any job prospects. So do you think our voices have been heard? Do you really think that we actually matter? Or maybe fear and poverty aren’t so bad, hmm? 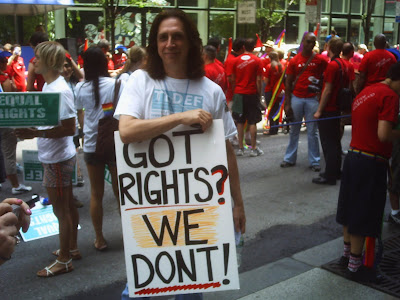 This deep-seated mistrust of G&L institutions and functions didn’t form in a vacuum and didn’t happen overnight. This has been roiling underneath for quite some time. And it’s about to boil over….