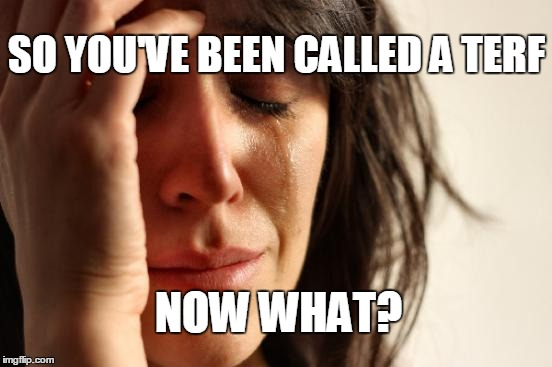 There are many things possible in the universe. If you are called a TERF it could be that the person who said it is actually a self-loathing misogynist who hates feminism and puppies. It could be that the label was unfairly or inappropriately applied. It could also be that someone used the term to point out your casual trans antagonism or unconscionable jackass bigotry.

Who the hell knows?

Regardless, you have been told over and over again that once you have been tagged with the term “TERF” that a trans cabal will soon descend on you, wielding their mighty screen-capping skills and a latent sense of “male entitlement”. Any moment now they will come to your door with pitchforks and whois searches ready to quote mine the last 5 years of your life and bend you to their will or you will face dire consequences.

Or maybe nobody actually called you a TERF, just mentioned that something you said was trans antagonistic and made them angry, then you yelled at them and said “Next you’ll be calling me a TERF!” and you sort of remember it wrong – but whatever! The fascist PC police are ready to throw a spotlight in your face and scream “Trans women are women! Yes or No! Prepare to be NO PLATFORMED!!”

Now all the sudden even your close friends and acquaintances are part of this oppressive network of ideological purists. “I think some of the things you are saying about Caitlyn Jenner’s gender presentation are insulting to trans women,” says Sally. “That feminist you RT’ed the other day actually has very transphobic views, just so you know,” says Jo. “Christ! Did you just recommend Gender Hurts what the hell is wrong with you? Seriously – what’s next? The myth of the 6 million. GTFO!” says Patricia.

You think there was some time in all this when relationships could be salvaged, but that time is probably long gone. You feel drummed out of the feminist spaces that you have become accustomed too. Thank goodness you still have a few true friends that stood by you, letting you know that all your other intolerant friends were just out to get you because they HATE the notion of a nuanced, intellectually honest opinion! What else could it be?

You’re about to be love-bombed by a bunch of bigots who think that trans kids aren’t real, that trans related surgery is mutilation, that trans women should be turned away from shelters, that allowing trans women in bathrooms will result in rape, that trans women attracted to women are autogynophiles, that radical self-acceptance will magically make dysphoria disappear, that trans women being respected as women is a form of appropriation or mockery of “real women”, that trans women that were “socialized as boys” retain male privilege and entitlement and are therefore inherently violent, that transition is reinforcing oppressive gender norms and doesn’t actually save lives, and blah de blah blah blah.

But no worry, all that disparagement, disinformation and fear-mongering against trans women – that has been advanced TIME and TIME again in high-profile articles in famous magazines will be wrapped in a nice little bow of courage in the face of harassment and silencing with a HUGE dose of pseudo-intellectual bullshit such as the ever-so-popular “Sex not gender!” song and dance.

I’ve heard it all before. It’s a broken record. When trans women assert the validity of their lived experience as women, they are routinely accused of being entitled, violent men. Their actions and words sifted through to find anything unkind in a desperate attempt to paint trans activists as the villains.

Amazingly, when I engage with other feminists with whom I disagree, even though (according to them) the word “female” on my original birth certificate decrees that my womanhood is an immutable obvious biological reality that must be respected to preserve feminists thought, I am often accused of the same damn thing. I am a violent man who refuses to acknowledge the boundaries of women. My male socialization is “obvious”! In fact, my “male privilege” is “even more astounding” than my cis male friends.

This happens to me regularly.

When anyone attempts to confront what they view as transmisogynistic or cissexist, trans women are blamed for this lack of docility even when the majority (or even ALL) of the people involved in the conflict are trans men or cis.

Collective punishment is part of how bigotry works. These generalizations are then excused by claiming that good ones exist but the bad ones deserve it.

And irony upon irony – the brave heroines standing up to the “male” oppressors have a list of demands required to be on the nice trans lady list wherein you gain the privilege of being referred to by your real name, your real gender, and not some cute little neologism implying your inherent lack of relative legitimacy.

“Nail polish does not a woman make.” And that’s the thing – it may sound high-road and common-sense, but only to those that have the privilege of reducing the trans experience to an intellectual exercise and assume that trans women need a patronizing lecture on “What it is to be a woman”.

They demonize trans women by insisting that trans women stop being some twisted stereotype they themselves dreamed up. It’s like if I walked into a physics class and the professor came up to me and said, “I just think women in science are great and I support you SO MUCH – just don’t distract the boys while they are working or cry if you aren’t able to figure stuff out!!”

The resounding message that mainstream cis feminism is sending is: We will accept you into our exclusive club as long as we have the power to dictate who you are. That message is demeaning. It is not some sort of “nuanced” compromise.

At it’s worst – this message insists that you place the comfort of others above your own life.

The transgender women [in this gender critical discussion group] contradict the dominant narrative on what transgender women think- feel- believe on this issue and all of that can be very threatening to a political agenda in which everybody is required to play along lest they cause a suicide.

This whole scenario is a pattern I have seen many times. Someone is criticized for parroting these talking points, they start shedding contact with anyone who doesn’t defend them against that criticism, and then they get loved bombed. These groups try to induct feminists who feel embattled, by wearing a facade of openness. They convince themselves and others that “trans women are women” is dogma and “penis is male” is science.

And no – I really, really don’t enjoy seeing this play out, especially among friends.

However, just so you know, that if this process isn’t somehow magically derailed, the next stop is to indignantly froth about how unfair you were treated and how the big bad trans cabal messed up your Christmas and you’re sort of gonna sound like this:

Editor’s Note: The author of this piece, so often called out by TERFs and their sycophants for her obvious male privilege and socialization is, in fact, a cis woman.