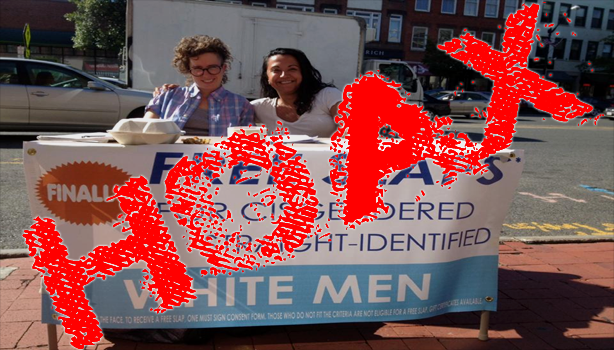 Or not. Perhaps you’ve seen this image floating around the Internets today:

As InfoWars reports, “The California Green Party is attracting controversy after posting an image on its official Instagram page which promotes ‘free slaps’ to be metered out to ‘straight white men’.”

However, when this image came out, the California Green Party didn’t have an Instagram account. In fact, the first time the image showed up on the internet was when it was posted to 4chan. If InfoWars bothered to check the image’s embedded data, the conspiracy site would have found that the file contains no camera information and that all of the identifying data was stripped from the photo. This is usually achieved through photo imaging programs such as Photoshop.

Feinstein, on behalf of the California Green Party, has demanded that InfoWars take down their article:

Its hard enough to build an alternative political party within the very undemocratic U.S. electoral system, without dealing with misrepresentations of our platform and positions. Having to deal with such misrepresentation on top of it only makes it that much more difficult, and unfairly so. For that reason, we ask you to immediately take down your article claiming that it is our official Instagram page, and run a correction to reflect the facts, in order to set the record straight. – Feinstein, email to InfoWars

As of this posting, InfoWars’ false story is still up.

The following are comments from gullible InfoWars users who not only believed the hoax, but used the hoax to justify misogyny, transphobia, xenophobia, homophobia, racism, anti-feminism and political conservatism. Moreover, this InfoWars hoax inspired the site’s readers to advocate violence against women, feminists, social justice activists, and trans people:

While the InfoWars story is indeed fake news –this image is in no way associated with the Green Party– the image itself is an actual photo. Apparently artist Suz Evans staged this action as a piece of performance art. Evens went on to write, “after much internal and public criticism around this performance… I would [like] to make the statement that [th]is performance was inherently problematic in its concept and delivery.”