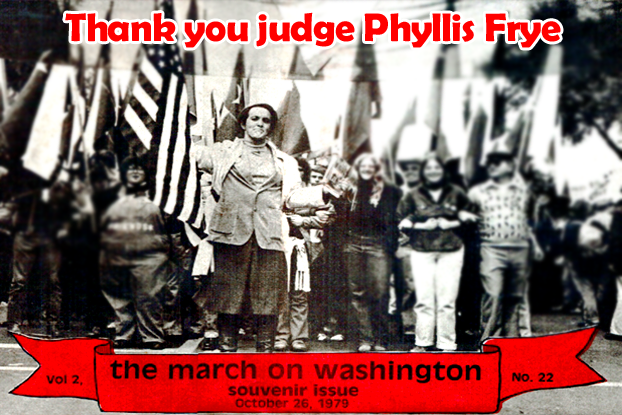 What follows is a post that I made after I processed a number of her personal documents for the Transgender Archive located in Houston, Texas:

Over the last 24 hours, I’ve spent about 12 of them scanning Phyllis Frye’s 1970s trans documents. I don’t know that I can even put into words how those documents affected me. Most of us don’t know that we all owe Phyllis a debt of gratitude.

1973: Teaching transgender law before there was such a thing

Today we get really worked up if someone uses a word like “tranny” while endlessly debating whether the term “transgender” is a taxonomy or an identity. When Phyllis was creating what we would all come to benefit from, she was doing it in a world few of us would understand today.

Phyllis started the first inclusive trans group in Houston. Before she heard others use the term, she began to independently say “transgender” – in fact, she’s perhaps the earliest to cut through all the BS and just use the term “trans” to describe all who share a non-cis history, experience and/or expression… something we still do today.

Phyllis was the one you wrote to if you lived in the South. Phyllis was cultivating the likes of Paul Walker even before he was evena doctor. She helped Walker get the 2nd gender clinic in the nation up and going and in turn, Walker supported Phyllis’ trans groups.

[alert type=”info”]Quick History Lesson: Walker was part of our nation’s 1st gender clinic, started one of the earliest ones in Galveston, TX, chaired the effort to put together a Standard of Care and was responsible for distributing all the Erickson Foundation educational materials.[/alert]

In the 1970s, she was OPENLY trans… doing radical things like leading queer marches.

While I know that it’s a popular meme to pin the use of “transgender” on a number of people who are not Phyllis, but between the “trans” taxonomy she put into Walker’s head, using the umbrella terms “transgenderism” and “trans” in her presentations at various universities and inventing a branch of national and international law called “transgender law,” I think the time has come to acknowledge that without Phyllis, the “trans community” may would not exist in its present form.

In the 1970s, Phyllis fought in a way that few but the most active of civil rights leaders could claim to have fought. She braved arrest every day, she integrated trans folk into the National Origination of Women, she reached out to any politician who would listen – from the school board to the US President – and would do whatever it took to get an explicitly oppressive system to treat “trans people” (as she was calling us back in the 70s) with equality.

“Trans” – Explicit T umbrella term being part of a ‘GLBT community’ in its infancy. From speech at “Town Hall Meeting I”

[alert type=”info”]Quick History Lesson: The 1978 Town Hall Meeting I is where Houston’s gay agenda came from. All of our queer infrastructure, values and community goals came from these meetings.[/alert]

Not only did she do “little” things like get Houston’s crossdressing ordnance overturned, she did other things like… ensure there was something that would come to be known as a “GLBT community.”

The trans-inclusive gay agenda by Phyllis

You know that “unity not uniformity” value that I’m always waxing on about that we in the Houston trans community seem to value so much? That’s all Phyllis. Language aside, she worked tirelessly to pull together a community. I’ve mentioned that Houston has something that’s called a “Unity Banquet” (now in its 20th year) and a “Unity Committee” and that these institutions are the foundations upon which a unified community was built. Well, we can thank Phyllis for that too. Decades ago, the mixed group and transsexual group was at war with the crossdressing group. Phyllis was the one who cultivated the ceasefire.

Back in the 1970s, Phyllis was blacklisted. She wasn’t able to get work even though she was an experienced engineer. It is still heart wrenching to read the dozens upon dozens upon dozens of brush-off letters. When she tried to go back to school, she was turned down for practically any and all school funding. The State of Texas wanted to even refuse her unemployment. Schools turned her down and when she did get into school, she had to endure everything from right-wing Christian school groups coming to her home threatening to rape her wife (who stood by her through all of this) to the slashed tires, graffiti and threats from neighbors and anonymous haters.

… not to mention the rejection from “friends” and family… including her own children. Going through these papers, I truly connected with the enormity of what she was facing… and overcoming… largely on her own.

In the middle of all of this, she was being there for others day and night while building a foundation for a trans community. You name it she braved it. Remember; this was still the 1970s Houston where the KKK bombed our community radio off the air, they proudly marched down Montrose (the gayborhood) and our Mayoral candidates would say things like “shoot the queers.”