Cathy Brennan, in one of her blogs titled Name The Problem, has again named me a violent man in her post <To the Victor Go the Spoils. She tweeted her link to her post here. 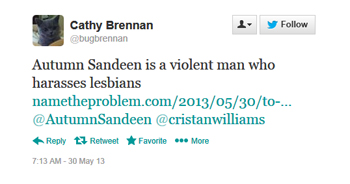 Brennan refers to a piece on GenderTrender by GallusMag entitled A GenderTrender Chat with Autumn Sandeen. In that post, GallusMag published much, but not all, of a private, non-public conversation I had with her on Twitter.

In that conversation with GallusMag I used some choice language — four letter word language — that I really regret. Among the four-letter related names I called GallusMag was “fuckwad” — it wasn’t a pretty conversation, for sure.

I could make excuses about my behavior relating what was going on in my brick-and-mortar world that had nothing to do with GallusMag that were negatively impacting my life, as well as make excuses regarding how GallusMag’s and Cathy Brennan’s past behavior could justify my inappropriate language and behavior. But, I won’t. Basically, I just failed to live up to my own standards that I learned in reading the words of Martin Luther King Jr.:

Means we use must be as pure as the ends we seek.

Nonviolence means avoiding not only external physical violence but also internal violence of spirit. You not only refuse to shoot a man, but you refuse to hate him.

Never succumb to the temptation of bitterness.

Hey, I succumbed the the temptation of bitterness; I failed to avoid internal violence of the spirit; I failed to use means as pure as the ends my community seeks. Basically, I didn’t live up to Martin Luther King Jr.’s Six Principles of Non-Violence. I could make excuses for my failure in this, but that wouldn’t change anything for me: I still failed to live up to my own standards.

I was completely wrong in using four-letter language towards GallusMag. I’m sorry I used such language to her, and I fully apologize to her for that inappropriate language of mine. I’m going to be mindful of my frame of mind when I respond to others in the future, and do that “count to ten” count when I’m passionate or angry because I know that my words written or spoken in the passion of a moment are often inappropriate and hurtful…and are often words I later regret.

And, I regret the written words — the four-letter name calling — I used in communicating with GallusMag.

So, to GallusMag directly: I’m sorry. I was wrong. I failed. I won’t engage in that kind of bad behavior towards you again.

And too my trans subcommunity of the LGBT community, I’m sorry I failed y’all in giving GallusMag and Cathy Brennan fodder for identifying trans women as a class of people as a violent people. That’s a fail I’m going have to live with for a long time; it’s a fail I’m going to work not to repeat.

The transadvocate recently reported on the efforts of the Texas radical right to derail a proposed LGBT non-discrimination policy in San Antonio. As noted, the proposed ordinance wasn't asking anything more of San Antonio's adults than what has been asked…
Read
Previous Post

I'm not holding my breath. Andrew Cuomo, New York’s new Democratic governor, has repeatedly emphasized that he “want to be the governor who signs the law that makes marriage equality a reality,” saying in his January 5 inaugural speech, “We…
Read
Random Post

How the Disease of St. Barney's Dance Has Dumbed-Down Anti-Discrimination Discourse